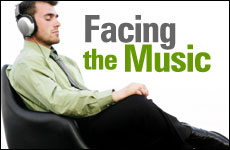 A year after my mother's death, I couldn't bring myself to listen to music again.

I never imagined that my mother would die, that I would have to observe the Jewish laws of mourning a parent, including not listening to music for an entire year.

Ever since I can remember, music has always been a major part of my life. I’m not a musician, but I've always been a very active listener and fan of many different kinds of music.

And then suddenly, a little over a year ago, all that changed abruptly with my mother’s death.

The day after the first yahrzeit of my mother, the anniversary of her death, I was able to listen to music again, but I was disinclined to do so.

After a full 12 months of being ‘music-less,’ I had grown so accustomed to life without music in mourning my mother’s death that it was hard to contemplate ever listening to music again.

I wasn’t ready to embrace returning to life as it had been before my mother died.

I didn't listen to any music that first day. I wasn’t ready to embrace returning to life as it had been before my mother died. I just couldn’t.

I put in a CD, sat down on my favorite chair, and listened to my first song back.

Tears were rolling down my cheeks. I just couldn’t believe what I was doing. I closed my eyes and imagined for a moment that the previous, long 12 months were just a nightmare and weren’t real.

Then I opened my eyes and began paying attention to the song and the words.

For my first song back, I chose a very meaningful, slow ballad which had been a just-released, beautiful new melody over 12 months ago. I heard it a few times just before my mother died but not enough for it to fully reach my ‘music consciousness.’

Memories. What an appropriate theme for a first song back.

When I first lost my mother, some people who meant well would come over to me and say something like, “Cherish your memories—at least you have fond memories of your mother. Take comfort in them.”

Such words hit me like a dagger to my heart. I wasn’t ready to accept that all I had left of my mother were fond memories. The death was so fresh, the pain was so raw that the last thing I wanted to acknowledge was that I no longer had a mother and now I only had memories of having had a mother.

But now, over a year later, having lived through the entire mourning period, memories of my mother felt so warm, memories felt so meaningful.

Most of us forget a large percentage of the people we meet, the places we go, the events we experience. But certain things stick out in our minds and are never forgotten. Why? What's special about those memorable times?

In the Hebrew language, the word for 'remember' is zachor. There is a principle in Hebrew that phonetic sounds and letters are inter-related regarding their meaning. Consequently, although the word sagar means 'to close,' sagar and zachor are connected in the depth of their connotations (the 's' and 'z' are phonetically close, as are the 'g' and 'ch'). When we remember an event, it's because we originally closed off that occurrence in our minds and locked it in as supremely meaningful. We store these numerous memories in the 'picture album' of our mind, locking them in and never forgetting them.

Live memorably so that you'll have great memories locked into your mind.

We would do well then to live memorably, to bond so strongly with events in our lives, especially those involving friends and relatives so that we will have great memories to lock into our minds. Living memorably would allow us to appreciate every sunset, every walk around the block, every phone call from our parents, every conversation with our friends. Each instant of life would be laced with urgency and passion. We would remind ourselves of the significance that every human experience can yield. We would pinch ourselves regularly as a reminder to appreciate the moment. We would make all days and events meaningful and memorable—even the so called monotonous ones.

Saying goodbye to a friend or relative when they move away is hard. But you always have the great memories to grasp on to when you are feeling down.

Certainly saying goodbye to a mother at her death is a heart-wrenching experience.

Indeed, I will cherish and hold on to the wonderful memories of my mother, the theme of my first song back.

Strategies for Making Real Changes in Your Life

What Would Rabbi Noah Weinberg Say?

The Power of Making a Difference

What Do I Know?
The Promise Of The Land
Which Chat Are You On?: Parshas Behar/Lag Ba’Omer
Do You Like Slow-Cooked Food? Thank the Jews
Comments
MOST POPULAR IN Personal Growth
Our privacy policy