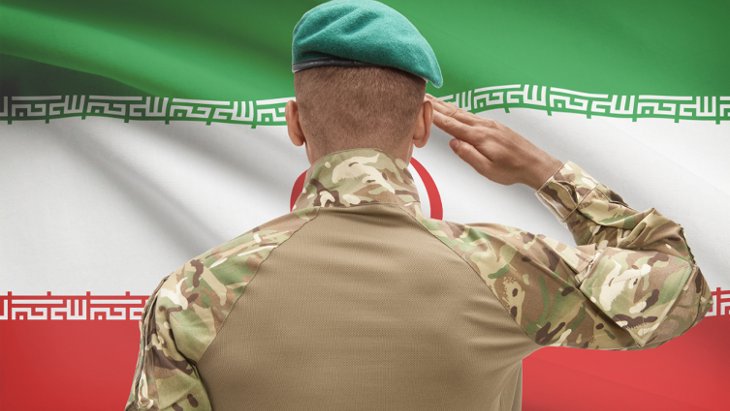 I ask Rear Admiral Hossein Khanzadi all the tough questions.

JEWLARIOUS SATIRE - When I was a little boy growing up, I considered numerous job options for my future – cowboy, lawyer, librarian, chef. If you would have told me that one day my work would involve sitting face-to-face with Iran’s top naval Commander: Rear Admiral Hossein Khanzadi, and interviewing him, I would have thought you were nuts. And then, I would have asked you several questions that would logically have occurred to any five year old hearing such news about his future: “What is Iran?” “What is a Commander?” “What kind of name is Hossein Khanzadi?” And, of course, giggling a bit, “What is it, exactly, that makes him a “rear” admiral?”

Nonetheless, that’s exactly what I found myself doing, through a series of quirky connections and circumstances. Apparently, my neighbor’s hair stylist is third cousin to Khanzadi’s massage therapist’s sister, and helped set up the interview. And even that wasn’t easy, until I managed to convince Khanzadi that this would be the featured interview for a very important and respected media outlet in the West. Of course, I made up a name for the outlet, as I didn’t think he’d take too kindly to being interviewed by “Jewlarious”. So, as far as he’s concerned, the name of the media source that interviewed him is Mega Powerhouse Media Chronicle.

Even then, they insisted on top security and privacy measures for the interview. I was flown to Tehran, then put on a smaller plane to Ahwaz. Blindfolded, I was driven to Abadan, where I was to meet Khanzadi. Blindfolded again, I was driven for an hour to his headquarters where I was made to sign a pledge that I would never reveal my route or his location, under penalty of death. Oops. Well, it’s been a short life, but a good life.

Jewlarious: Rear Admiral Khanzadi, I just wanted to thank you for agreeing to this interview and welcoming me to your beautiful country.

Jewlarious: You have some very astute advisers. I just hope we can do justice to a man of your breathtaking stature.

Khanzadi I must say, you American media people seem quite skilled at the art of sucking up.

Jewlarious: How astute of you to notice. Yet another tribute to your intelligence and insight. But let’s dive right in and talk about what’s currently going on in the Arabian Gulf. Can you bring us up to speed?

Khanzadi: Certainly. Though we prefer the designation “Persian Gulf.” It is a body of water containing many fishing grounds, extensive reefs (mostly rocky, but also coral), and abundant pearl oysters. The wildlife is diverse, with many aquatic animals, migratory and local birds, 700 species of fish, and countless flora and insects.

Jewlarious: Fascinating. But I meant what’s going on politically. I believe you have stated that a fleet of drones has allowed Iran to watch every U.S. ship in the Gulf region and develop an archive of their daily movements.

Khanzadi: Yes. That was my idea. I actually got Rear Admiral of the Month for that suggestion. And a nice little bonus, plus a 25% off coupon for the International House of Hummus.

Jewlarious: Must be nice. But apparently, your statement took place just days after President Trump said an American warship had destroyed an Iranian drone.

Khanzadi: Not so. We have all our drones. I counted them myself earlier today. I’ve also named each one and we’ve painted each name on their flight controllers.

Jewlarious: Okay, I get it, I get it!

Khanzadi: Excuse me for being proud of my children.

Jewlarious: I thought we were talking about your drones.

Khanzadi: We were. My drones are my children! Look, our drones have significant ranges and have no limitations in communication links. We have a complete archive of images of American vessels approaching from very far distances.

Jewlarious: Not to doubt you, but some analysts say Iran has often inflated its capabilities in a bid to rally domestic support and confuse foreign rivals.

Khanzadi: I know! And it seems to be working! As you Westerners say, high five!

Jewlarious: Experts say there’s little doubt that Iran can track ships going through the Straits of Hormuz, a narrow waterway through which a significant amount of the world's traded oil is transported. But your ability to track all those ships once they are in the Gulf is far more questionable.

Khanzadi: All I can say is -- underestimate the capabilities of Iran at your own risk. That, and what’s that cologne you’re wearing. It’s intoxicating!

Khanzadi: I must have it! My Achmed Rahimi’s “Obsession” just isn’t doing it for me.

Jewlarious: Back to your questionable ability to track all those ships once they are in the Gulf. And not to underestimate the capabilities of Iran, but your claims were greeted with skepticism by some analysts, who say Iran is bluffing.

Khanzadi: Is the bluff working?

Khanzadi: How can it not, when our world-leading drones are following all enemy ships, particularly American ones, and taking pictures point-by-point from their origin until the moment they enter our region. I think the world owes Iran an apology.

Jewlarious: The world thinks it’s the other way around. In fact, Iran has already captured one UK tanker, the Stena Impero, which has sent Middle East tensions spiraling once again. Britain has declared the seizure illegal and pledged to defend its shipping with a European-led 'maritime protection mission' in the Gulf.

Khanzadi: They’re just blowing smoke up our falafel. Iran is the 'guardian of security' in the region, and the Islamic Republic has the will and power to respond to any threat.

Jewlarious: I understand that Iran has just signed a document to expand ties with Russia.

Khanzadi: How could you possible know that?! It’s a secret!

Jewlarious: It was on CNN, MSNBC, CBS and ABC. Said Iranian forces are planning on conducting joint drills in the same tense waters the U.S. sought to counter the Islamic Republic with international support.

Khanzadi: Okay, so it’s not a secret. Remind me to behead our publicist.

Jewlarious: One more question, Rear Admiral Khanzadi. What, exactly is a “Rear Admiral”?

Jewlarious: It’s a deal. Thank you for your time.

Khanzadi: Thank you for the important media exposure. And sorry about the strip search. Precautions, you know.