Tips for Shopping in Israel 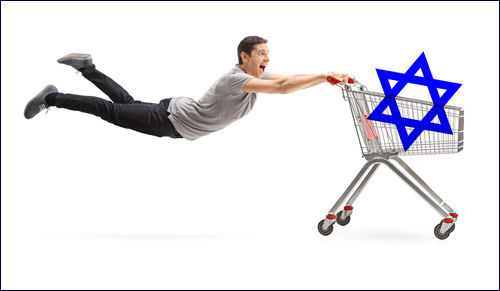 Leave your cart at the checkout while you continue shopping.

I learned this when I saw a cart waiting in front of me, by itself. There was a random lady visiting it every five minutes, asking me questions like, ‘Where are the cucumbers?’ I let her know that the cucumbers are probably in the cucumber section, next to the carrots that she was looking for five minutes ago. I proceeded to tell her that all the fruits and vegetables are at the entrance of the supermarket. She had no idea what I was talking about, as she came in through the exit. Apparently, the exit is much closer to the checkout line.

The next time I went shopping, another stranger asked me to point out the herbal tea section while I watched her cart. I guarded her spot and she came back, also five minutes later, with a chicken. When she asked me where the dairy section was, I realized that this is how people shop in Israel. So, I started putting my cart in line before I shopped too. With this Israeli method of shopping, used mainly by Israelis above the age of 60, I could get other people to help me, while bypassing the line. Now I never take my cart through the supermarket. It is too bulky. I leave my cart in line and ask a random person to ‘Guard My Spot.’ It makes the shopping process much faster, for me.

You Can Taste Anything

I learned this when I saw a guy taking an orange off the rack and eating it. I noted, ‘Sir. You cannot peal the orange, take a slice and put it back. That is not tasting. That is taking.’ I thought I was catching people stealing. He noted that there is no other way to taste an orange. And that is true. I then went for a box of cream filled sandwich cookies and noticed that there was not one box without an open package on the inside.

I saw a woman opening a box of cookies right in front of me. She got mad and reprimanded, ‘How do I know if it is chocolate or vanilla filling?!’ When I saw the picture and package with ‘vanilla cream’ written on the outside, I knew I had learned another lesson: Anything you eat in the supermarket is free. You only have to pay for food that you take out of the supermarket.

I have accepted this tradition. Many days now you can find me sitting in the candy section at around noon time, eating brunch. Recently, a kind man saw me with a bag the other day, eating at the sour stick smorgasbord in the supermarket. It was a hassle. Standing there, opening packages. So this beautiful soul handed me a plate and gave me a chair. The two of us, brothers in a supermarket, sat down and ate together. The experience brings me closer to my Jewish brethren and type 2 diabetes.

It is similar to the American supermarkets where they have people giving you samples of puddings and different sorbets. The difference is that in Israel, you do not need permission. It is the same rule as when shopping in the souk: If you do not ask, you are allowed to take as many sunflower seeds as you want. The supermarkets in Israel want the people to walk out satisfied, and having transferred their germs to one another. And nothing is as pathetic as the American shopper who has to keep on asking representative for more vanilla pudding, just to get a little satiated.

Give Yourself an Extra 20 Minutes to Open the Plastic Bags

They are impossible to open. I have tried it all. I have blown at the bag. I have rubbed my fingers together, on top of the plastic in a very fast motion, in hopes of starting a fire. I have even licked my fingers, which has worked on books. But all are unsuccessful. Israeli bags are like little impenetrable plastic bomb shelters.

Israel has a new rule that bags in supermarkets cost money, which they say is ‘to encourage less use of plastic bags and recycling.’ The real reason is that supermarket lines were being held up by people who couldn’t get their bags open.

I learned this when I was at the meat counter and a woman wanted to pick up a few staples. She told me to guard her spot, and I take my obligations seriously. Now it was only me there, and I had already been helped. Needless to say, I got in a little scuffle when another man who showed up and insisted that it was his turn, as nobody else was waiting. I am just happy that she brought back some paper towels to help cushion the fall I was about to take.

You put the five shekels in the cart and it is yours to take. Forever.

I learned this when I was driving my car and noticed a woman walking home with her son and the groceries in Supersol’s cart. Later that day, I saw a group of five supermarket carts outside my building, attached to the railing with a bike lock. The man locked up the carts, as he told me, ‘Because there are a lot of thieves out there, and you have to watch out for them.’

They charge for the use of carts in Israel. You go to Supersol and you have to put five shekels into the cart. The people at the supermarket told me that the charge for the cart is to discourage people from taking them. When I asked them about the deterrent, they told me that each cart costs 500 shekels.

For you living in America, you are probably thinking, ‘This guy is taking advantage.’ You don’t understand. I am part of a loving society with people who will ‘Guard my spot.’ It is how we do our groceries. How do I know if the candies are going to give me a stomach ache or not, unless I try them? And I am going to return the supermarket cart the next time I go to Supersol. I will need a way to bring my perishables back home. There is no way I am going to spend money on bags I cannot open. By the way, do you have to pay for your supermarket carts in America?

Instead of judging, may I suggest using some of these traditional Israeli techniques when you go grocery shopping as a way of connecting with your Homeland.

Shavuot at a Social Distance

WouldJew Believe #13
What Makes Eli Run?
The Tyranny of Materialism
Science Enters the Mysterious Inner World of Consciousness
Comments
MOST POPULAR IN Jewlarious
Our privacy policy