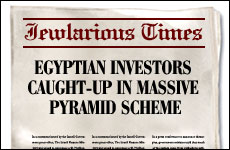 It is a case that authorities are calling "historic" and "breathtaking in its proportions, weight and scale." Lt. Mahmoud Shara told Jewlarious's sister station, Al Jewlarious, "This was not just any old pyramid scheme. This was a 5,000 year old pyramid scheme. One might even call it 'The Great Pyramid Scheme'." Lt. Shara told Al-Jewlarious that Egyptian police had been studying the case on and off for 4,630 years: "When I got the case file, there were hieroglyphics, drawings on papyrus and stone etchings. The case weighed 4700 pounds."

Shara told Al-Jewlarious that for close to 2000 years, the police had been pursuing a money trail, but were tracking the wrong suspects -- a bird, a pharaoh and a donkey -- due to mistakes reading the hieroglyphics. Recently, however, the police caught a break when they noticed more than 50 massive "pyramids" scattered across Egypt. As they looked into the financing of these pyramids, they could find no records at all. As the police dug even deeper, they found that ordinary citizens had been buying and selling shares in these pyramids and had been luring even more investors each year.

Police blew the whistle on the scheme and announced that they would bail-out any investors who had lost money during the past three hundred years. Egyptian Minister of Finance Youssef Boutros-Ghali told Al Jewlarious, "So many people, from bricklayers to taskmasters to mummies are innocent victims in this scheme. None of us could ever have seen it coming. It really is puzzling. It is a riddle -- a sphinx of sorts."