What Matchmakers Are Really Saying 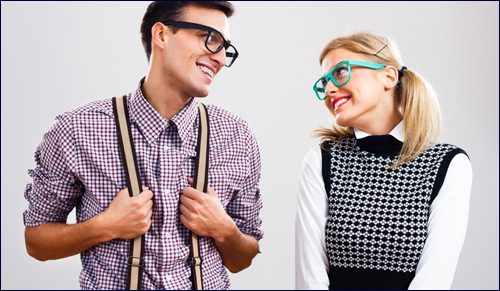 Don’t let shadchans throw you off. They’re putting you down, but it’s for your own good.

I want to get married already.

As a matter of fact, I want all of us older Jewish singles to get married. Holidays are not fun as a single religious person. I had a “Singles Seder” last Passover. It was pathetic. I had to hide the Afikomen from myself. I didn’t find it. I felt like an idiot. I couldn’t even get myself the prize. I really wanted that bike.

So the question is how do we get married?

Answer: we have to embrace the “Shidduch”, or in common parlance words, the blind date.

Terminology that You Must Overlook

If you are going to be set up, you are going to hear some stuff that does not make sense. Do not let it throw you off. Just remember, they are putting you down, but it’s for your own good. Your problem is that you are around people that are too supportive.

Be ready for these lines:

-‘They are Frum (religious) but cool’

As if we expect all religious people to be losers. The matchmaker explained that it was because she even knows how to use a computer. That was too much for me. As I told the matchmaker, I was looking for a religious woman; people that understand technology are not my type.

As far as I can tell, this means not religious at all. They described me as modern frum and then explained, ‘he wears jeans.’ Apparently no good religious people wear denim.

-‘Looks good for her age’

That is a sure sign that they are living in a retirement home.

These are attributes of evening wear, not of people. This is what they say when they want to hide the fact that I am balding. It is also a way to avoid the conversation of how somebody lost their job. You might even hear other words like ‘delightful’ to describe somebody who is in fact not that delightful.

-‘Lights up the room’

This means she is very ostentatious. Does a little twirl and says, ‘I am here,’ everywhere she goes. This is also an offensive way to refer to red-heads.

-‘You are not getting any younger’

A statement made to remind you that you do not get younger with age. Many people are not aware of the fact that years go by. They say this, just in case you thought you were taking off some years of your life by going to the gym.

-‘She is not a super model’

That is not the first thing I feel is relevant when hearing about a potential spouse. Even so, I was told that, because she understood that I had an unrealistic vision for my intended. Super Models are not religious Jews. Religious Jews don’t usually dress like that. She continued to preface the match by saying, ‘She is not somebody you would ever see on TV.’ Still not peaking my interest. Then she nailed it, ‘Not somebody you would ever want to see in your home.’ OK now she got me. I went out. I gave it a chance.

It didn’t work out. That is the ending to all of the stories you will hear from me. Sorry to give the ending away.

-‘You are not perfect either’

This is a statement made because many of us have not been living with our parents for the past few years and therefore need a reality check. This is usually stated with a sense of resentment, for not taking their suggestion for a date. Even though they are married and should have no say as to whether you want to date the other person, they are telling you that you have no right to not go out with somebody you don’t want to.

-‘You could do better’

Remain single for another 30 years. After finally meeting a special somebody you thought you cared for, they are not good enough for your family.

You should not date people you are attracted to. A statement made by the person setting you up, meaning, ‘You should settle for somebody you do not like, like I did. Think of them as a roommate. That you don’t like.’

-‘He needs somebody real special’

He needs a mother, a nanny and a caregiver. We cannot pinpoint his disability.

Be ready for this bad idea for a date.

-‘I think he might be a few years older than you’

He is around twice your age.

I was not attracted to my husband till 5 years into our marriage. I thought he was sinfully ugly when I married him.

This is said to remind you that it will be a miracle if a girl wants to marry you. As my shadchanit said at the end of our last meeting, ‘You are going to need God’s help for something to happen.’

-‘What are you looking for?’

A trick question. Do not answer this. Your honest answer will deem you shallow. Your parents may ask you this as well. They do not want to hear the answer.

-‘It will happen soon’

A disassociated statement made in response to a random greeting. This remark is made by all community members who are thinking that it is crazy you are still single. They are thinking of somebody for you. Example of conversation where this is seen: ‘It will happen soon.’ Response by me, ‘I just said “Shabbat Shalom.”’ End of conversation, and me trying to figure out what ‘it’ means.

A story everybody shares about a really depressed man who was sitting on dating sites for years. He was about to give up, when he finally met a woman who had 8 children, from 5 husbands. This is supposed to give inspiration to people who are 25 years younger. The story is supposed to teach you that there might be a really bad 25 years of solitude ahead.

This is said at weddings, to make you more aware of the fact that somebody else is getting married right now, and it is not you. It is tradition to seek out the single person in these circumstances, to make them more conscious of the fact that they are the only one in the room above 30 who is not married, at your younger sibling’s wedding.

-‘David, you are single, chubby, balding, kind of desperate. I have somebody perfect for you.’

As the person who set me up (the Shadchanit) told me, ‘You cannot meet the right person, if you think too positively about yourself.’ This shidduch turned into an excellent relationship, as I was able to overlook the fact that I had needs.

-‘He comes from a good family’

He has accomplished nothing with his life.

If you can overlook all of the above statements, you will be married in not time.

Junk Cheer
Where Are We? The Body, Brain, Soul Problem
Dr. Sheila Nazarian’s Escape from Iran
The Miami Boys Choir is Taking over TikTok
Comments
MOST POPULAR IN Jewlarious
Our privacy policy
Aish.com Is Looking for Great Writers