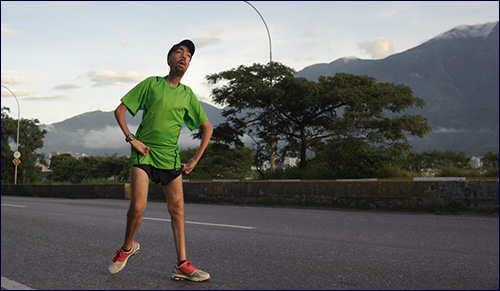 They said Maickel Melamed would never walk. Now he runs marathons to inspire others.

On April 27, 1975, in a hospital in Caracas, Venezuela, Maickel Melamed began his first great fight: coming into this world. His umbilical cord was wrapped around his neck, choking him and leaving him motionless and with permanent motor retardation. Born with a condition called hypotonia, Melamed suffers to this day with low muscle tone, which makes most activities that require any strength extremely difficult.

“When I was born I decided to live and this is a decision that I continued to take every single day of my life,” he said. 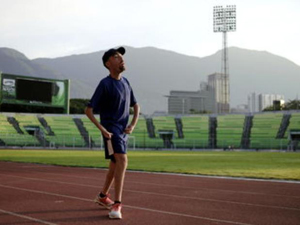 Doctors initially said that he would never talk or walk, but he eventually learned to speak and walk on his own. Today he speaks three languages fluently and despite the great effort required for him to move on his own, he does much more than walk!

In 2006, Melamed climbed the 5,007 meter (16,427 foot) high snow-capped Bolivar Peak – the highest mountain in Venezuela. He now set his eyes on a greater goal: running a marathon. For the next three years, he began a grueling regiment of daily training, doing some 6240 kilometers of exercise. He eventually ran the half-marathons of Bogota 2010 and Miami 2011 and went on to complete the Andean Development Corporation (CAF) Marathon in Caracas in 2012. From there he applied to run in the New York Marathon but was initially rejected. Only with the help of Achilles International  – an organization that helps people with disabilities participate in mainstream athletics – was he accepted. The first time he visited New York many years earlier, he was bound to a wheelchair. He never thought the next time he visited would be to run the marathon!

Melamed completed the Chicago Marathon – crossing the finish line at 1:30 AM, after 17 hours.

Just last month Melamed completed the Chicago Marathon – crossing the finish line at 1:30 AM, after 17 hours. He ran with a team of supporters including a physical therapist, trainer, and volunteers who encourage him. Nearly a hundred fans cheered him on as he completed the race. Although he was the last to arrive at the finish line, everyone agreed that he was a true winner. "When you cross the finish line, you think, 'I can do anything in life,'" Maickel said.

Melamed now trains 50 hours a week to stay in shape for the next challenge. Next February he is planning to run the Tokyo Marathon and he hopes to complete the Boston Marathon next year as a tribute for the victims of the Boston Marathon bombing. His list of accomplishments also includes extreme sports such as paragliding, skydiving and even scuba diving.

Much of Melamed’s early years were spent in rehabilitation. He was always told that someday he would be normal and looking forward to that future gave him hope to continue. The turning point in his life was the day the doctors told him at age 13 that his dreams were in vain. He would never fully recover. It took him several years to come to terms with that prognosis. When he finally accepted that he would never become “normal,” he took it as a message that he was meant to be unique. Instead of breaking him, it became the source of inspiration for his life of incredible accomplishments.

I had to fight many years to discover and accept my body as it was and to understand that I was a complete person.

“I eventually realized that everything I was fighting for was wrong,” Maickel recalled. “I had to fight many years to discover and accept my body as it was and to understand that I was a complete person. My body as it was is good enough to do amazing things. For me being a normal person was a bedtime story I let everyone tell me. It was a paradise that I lived my everyday life awaiting – to live happily ever after. But in truth, to be normal was not for me. I would never be a normal person and my physical condition would never improve. Not being normal gave me the opportunity to make of my life an extraordinary story.

“Normally to be different is not so desirable. The biggest challenge in life is to recognize and discover that you’re different and unique and that is your strength. For me it was evident that I was not like others. So I changed my perception that it was an advantage and not an obstacle. “

Growing up Melamed attended a local Caracas Jewish school, Moral y Luces Herzl Bialick School – where he eventually taught many years later. He graduated college with a degree in economics and went on to become a trained Gestalt psychotherapist. In 2009, he helped to create the organization Paz Con Todo [Full Peace] in which youth inspire and motivate people of all ages to contribute to peace in their community and throughout the world. Since then, they have worked together with the United Nations in Venezuela to organize a campaign and concert inviting Venezuelans to go "Crazy for Peace." Today he works as a lecturer, life coach, consultant, and workshop facilitator for companies, organizations, schools, and individuals in Venezuela, Colombia, Mexico, Peru, Costa Rica and the United States.

The main theme in Melamed’s lectures is that we each have the ability to change our perceptions of reality for the better. “Life has both ups and downs – if we only enjoy the ups, we are only enjoying half of our life,” he said. “The downs are the momentum to bring us to a higher level. Without darkness you can’t recognize light. We must see every step as a beginning and end in and of itself. Every person has a story, and every person has an attitude about their story. The issue is not what’s happening to you – it’s what you do about it.”

His slogans are, "Nothing is too difficult to try,” and what is now the title of his first book, "If you dream it, make it happen." He also often quotes the great Jewish magician Harry Houdini, who said, “My brain is the key that sets me free.”

The idea of inspiring others gave him the strength to accomplish the impossible.

“When you are in the marathon and your strength is gone in the last lap, the most important thing is to know why you are doing it,” he explained. “Every step is not a step; it’s a possibility to connect another person with their own miraculous possibilities. When you live for others an energy that’s bigger than yourself comes in and helps you succeed. When I dream of running 40 kilometers, it’s a big dream. But when my dream is to inspire thousands of people, the 40 kilometers becomes a small dream in comparison.”

He pointed out that his own last name – Melamed – means teacher in Hebrew, and he has indeed devoted his life to teaching and inspiring others.

“I want to live an extraordinary life – not for me – but so that everyone can realize that they also can live extraordinary lives. Human beings have greatness inside. When you look inside it’s amazing what you discover. I want to share that amazing treasure with people. You can share that spark with others and help to light up other people’s lights. If everyone could ignite another spark maybe we can make this world a shining place to live.”

Melamed’s message of overcoming incredible odds is one of the core messages of Hanukkah, when a small group of untrained Jews took on the world’s greatest empire and won. “Hanukkah is all about sharing the miracles and the light with others,” he said. “You have the power to make miracles in your own life when you attempt the impossible and then you must share it with others. You can find miracles everywhere because God is everywhere. The biggest miracle is to help a person recognize the hidden miracles in their own life. When you do miracles for others, miracles happen for you.”

The ancient Greeks brought the idea of competition to mankind. According to Judaism, however, each and every person is competing only against themselves to be the best they can be. Crossing the finish line is much less important than the personal journey that got them there. The life of Maickel Melamed is a true story of what it means to be a winner.

How I Chose My Hebrew Name

When Hip-Hop Gets Personal

Next Year In Jerusalem, Part 1

Buried Treasure
Korach 5782: Visit to Lift the Spirit
That Time The Ivy League Found A Way To Limit Jewish Enrollment
Would You Rather Be Right or Happy?
Comments
MOST POPULAR IN Spirituality
Our privacy policy