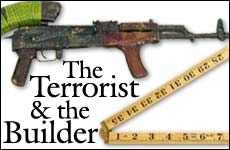 How to feel good amidst catastrophe.

I approached Lior from the end of his hospital bed. The first thing I saw, protruding out from his blanket, was his grotesquely swollen foot. It looked like a four-year-old's drawing of a foot -- huge, boxlike toes, the skin stretched taut over the ballooned limb.

Not wanting to be caught staring, I looked up quickly to Lior's face at the other end of the bed. The 27-year-old was smiling broadly, glowing, radiant.

I looked back at his swollen foot, then again at his radiant face. How could they both belong to the same person?

Lior, who does building renovations, had been wounded in the terrorist attack in the Jerusalem neighborhood of Neve Yaacov two weeks before. He was in his apartment, and had been fasting all day for the Fast of Esther, on the eve of Purim. He was just breaking his fast with a glass of water when he heard the sound of machine gun fire. He called the police, but the line was busy.

More shots. Lior did not own a gun. Suffering from a slipped disc, he had never served in the Israeli army. Nevertheless, propelled by the thought, "Maybe I can help," Lior charged out of his door in the direction of the terrorist. He took cover behind bushes and cars as he made his way closer to the terrorist, who was spraying bullets on every Jew within sight.

Lior saw a police jeep with three blood-spattered policemen splayed on the floor of the jeep. Two of them were not moving, perhaps already dead. One policeman, injured, was trying to return fire.

Lior, approaching ever closer, saw the terrorist run up to the jeep and point the barrel of his gun directly at the head of one of the unconscious policemen. He pulled the trigger, but no bullet shot out. He must have run out of ammunition. The terrorist dropped his gun, and grabbed the gun of one of the fallen policemen. The injured officer tried unsuccessfully to stop him.

At that moment, Lior sprinted toward the terrorist, jumped on him, grabbed him in a stranglehold, and dragged him six or seven meters away from the stricken policemen. Lior and the terrorist wrestled on the ground. When police reinforcements arrived, someone tried to shoot the terrorist. Suddenly Lior felt a sharp pain. A bullet had hit him in the hip. The terrorist was subdued and captured, and Lior was rushed to Hadassah Hospital.

One of the police officers died, and several civilians were wounded in the attack. But the other two policemen survived. One is already out of the hospital. "You're a hero," I tell Lior.

"No, no, I'm an ordinary person," he protests, sincerely. Then he adds, ingenuously, "Anyone would have done what I did."

"To run out, unarmed, in the direction of a terrorist attack? No way," I argue. "Weren't you afraid?"

I look at this man lying in his hospital bed, with his infected leg and his bad back, who was afraid to fight a terrorist with his bare hands. And who did it anyway. Because his impulse to help overpowered his impulse to hide. And I understand why he is radiant and happy. Rebbetzin Tziporah Heller says: "If you want to feel good, do good."

And I, who have come to the hospital to distribute snacks and bottles of spring water to those wounded in recent terror attacks and their anguished families -- because I couldn't stand sitting in my house and listening to the horrific news anymore -- I also feel better. And the three women who came with me, as they hand out their boxes with tissues to catch tears, and straws and cups for the spring water, and rugelach, because all Jews love rugelach, these women also find their mood lifting.

In front of one hospital room, where lies a 22-year-old girl injured in the Moment Cafe suicide bombing the night before, two tearful young women are eager to show us a photograph they are holding. "This is Sharona, who's in this room," they explain, pointing to one of the two smiling blondes kneeling on a grassy background, "and this is Ronit, five hours before she was killed."

Rising from My Wheelchair: Judaism and the Mystery of Healing

From Illegal Immigrant to Orthodox Jew