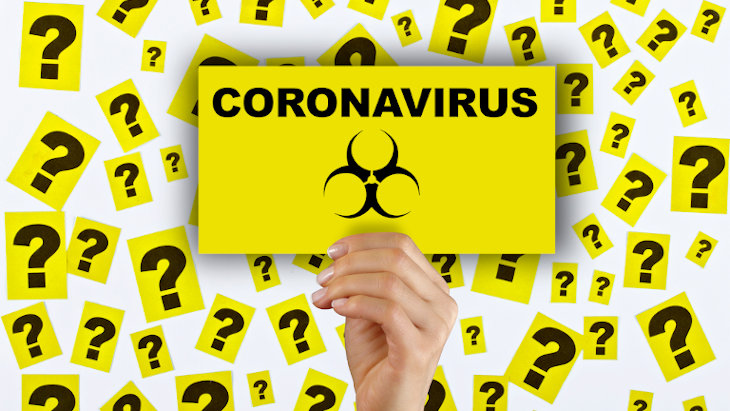 Do masks work? Should you go to shul? Should you send your kids to Israel? Mordechai tells all!

Here are my answers to the three most popular questions I’ve been asked about Coronavirus. Since no one has good answers mine are as good as any.

I hate wearing face masks. Yet apparently, I have to wear them. How do I cope?

I hear you. Nobody likes masks. They’re something else to remember on the way out of the house, they’re not visually appealing, and you basically end up smelling your own breath all day.

“Who had tuna fish for lunch? Oh, that was me.”

That you can smell. But there’s no way you can smell produce in the grocery store. Everything you buy is a gamble.

And I don’t know what’s worse – having to wear a face mask, or watching all the people who walk around with their masks under their chins. Like that works. They’re protecting the world from their chin.

I guess they’ve figured out that that’s how you have to wear it to not fog up your glasses.

But you really have to focus on all the upsides of wearing masks. For example, you can make whatever face you want behind them. You don’t have to smile when people talk, or figure out whether you should smile based on where you think their story is going. You can even make nasty faces. You just can’t roll your eyes.

Though you can wear sunglasses.

Okay, that’s not true. I’m still smiling at people like an idiot. Even though no one can see.

Also, you’ve got to look on the bright side of people wearing masks everywhere: No one’s scratching their noses in public or biting their nails or smoking and lighting their masks on fire or anything like that. Or blowing disgusting bubbles with their gum. It’s just the mask going up and down. And if you wear a mask at home all the time, you’ll stop eating. It’s basically a reminder not to put our hands near our faces.

Though I’m not entirely sure no one can eat with them. You can bet that if we’re still wearing masks when school starts, the kids will actually use their masks to eat in class -- at least as much food as they can fit into their masks before class. They’d just put a handful of pretzels in there and inhale them one at a time. And the only clue will be the crumbs falling down from behind their masks, or, when they remove the mask, the small outline of salt.

Some of the shuls in my neighborhood are finally opening up, but some of the outdoor minyanim are staying open. Any advice as to where I should daven?

I personally like outdoor shul. It speaks to the child in me. It’s like those days in school when the teacher decided to give outdoor class. It’s the same lesson, plus truck noises, but there’s something exciting about it.

On top of that, most of the outdoor minyanim I’ve been to up to this point have been at amusement parks. I guess that’s why I always get excited when I’m out somewhere and I see an outdoor minyan I can join. I’ll join it even though I’d been planning on going to shul later. Whereas I never walk into shul and exclaim, “Wow! Yay! There’s a minyan in here!”

But that said, after a few weeks of davening in the side yard behind someone’s house, I’ve come up with a list of pros and cons for outdoor minyanim, besides for the truck-noise thing, which I’d count as a con. It’s all one list, though, because personal experience has shown me that basically every single item would be considered a pro by some people and a con by others.

We have a daughter is supposed to go study in Israel, but we’re not sure if the programs will make it through the year, even though they want us to pay up front for the whole year. What should we do?

That’s a great question. The thing about studying in Israel for the year is that it’s not like you can show up and if you want to social distance, they give you a hat with a pool noodle on it. It’s about getting into a country. And no country trusts how any other country is handling the situation right now.

“They’re not doing it right. They got a second wave.”

“They’re not doing it right. They’re still on the first wave.”

“They’re not doing it right. What’s with all the protests all of a sudden?”

So nobody knows what’s happening. And they want money from you anyway.

For some boys it’s a little different, because it’s a window of more years, but even my brother who is post high school yeshiva age doesn’t know whether he’s going back to Israel next year. Right now, he’s in the States, in a yeshiva that’s up in the mountains. Not permanently; they just moved there. Because it’s a known fact that corona cannot climb mountains. We don’t know much about corona, but we know this.

Maybe they’ll have some kind of phone seminary where your daughter calls into Israel for an hour, and someone at the other end of the line gives an inspiring lecture, and that way she gets the unique seminary experience. Or maybe the school year will just start late. There’s no halacha that school has to start in September. They’ll take her for half the year, but to make up for it, they’ll take a whole year’s worth of money. Who says school has to start on time?

Have a question for “How Should I Know”? Just send it to me, along with a non-refundable deposit of several thousand dollars.

The Land of Microprocessors and High Tech

Oil In A Day's Work

Recession Rocks Israel's Fig Market
The Promise Of The Land
Which Chat Are You On?: Parshas Behar/Lag Ba’Omer
Do You Like Slow-Cooked Food? Thank the Jews
Comments
MOST POPULAR IN Funny Stuff
Our privacy policy