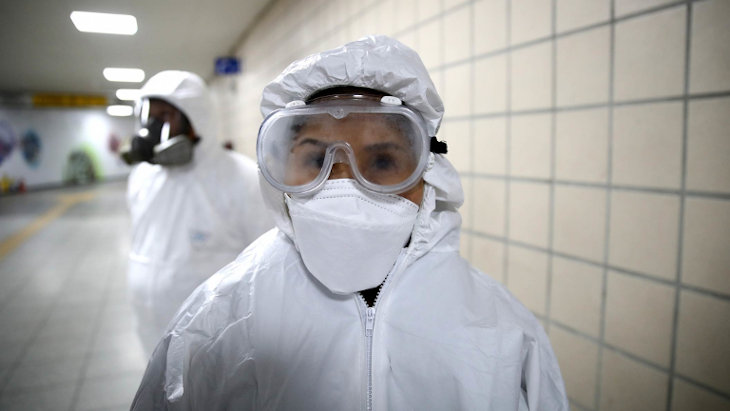 Be careful who you are exposed to.

Public health officials around the world are desperately trying to cope with the spread of the coronavirus. There is growing fear that a global pandemic may be impossible to stop. So far, this respiratory illness has infected more than 75,000 people and killed at least 2000 to the best of our knowledge. Cruise ships, unwitting tourists, travelers and others are slowly transmitting this angel of death to destinations far from its Chinese source.

Modern medicine, with all of its miracles, is stymied. There is no cure. The best and only solution for now is quarantine. Those suspected of being carriers need to be isolated. Contact with the infected is simply too dangerous.

There is a biblical parallel of quarantine that Jewish scholars viewed from a moral perspective.

The book of Leviticus describes the metzora, a person afflicted with tzara'at, a disease commonly mistranslated as leprosy. In fact, the disease is a spiritual malady, primarily caused by speaking slander about others. The metzora is someone who was, in Hebrew, motzi ra - an originator of evil talk, and he was to be quarantined, sent outside of the camp, sparing the community from his ability to infect others with his destructive gossip.

Thus, the biblical quarantine was intended not to isolate a carrier of physical disease but rather of moral turpitude.

While we hope to find a cure for the coronavirus, let us derive an ethical lesson from the ongoing misfortune. Everyone acknowledges the obvious: we dare not allow the healthy to be exposed to those who can harm them.

Isn’t this the most fundamental truth about human relationships?

Friends are assuredly good for you. In recent years, scientific research has suggested that people who have strong friendships experience less stress, they recover more quickly from heart attacks and they are likely to live longer than the friendless. They are even less susceptible to the common cold, studies show.

But not all friends have such a salutary effect. Some lie, insult and betray. Some are overly needy. Some give too much advice. Psychologists and sociologists are now calling attention to the negative health effects of bad friends.

Do not underestimate the warning of King Solomon in his book of Proverbs: “He that walks with wise men shall be wise: but a companion of fools shall be destroyed” (Proverbs 13:20).

It's important to not only have good friends but friends who are good.

One of the saddest illustrations of this truth is found in II Samuel 13. King David's son, Amnon, was struggling with sinful thoughts and lusts in his heart. He powerfully desired a forbidden physical relationship with his half-sister, Tamar. Amnon knew his desires were wrong and he could not bring himself to commit such wickedness.

Then five little words changed everything: “But Amnon had a friend.”

Amnon’s friend, Jonadab, was also his cousin. Jonadab devised a plan for Amnon to fulfill his lusts. Amnon got what he thought he wanted. Shortly thereafter he lost everything he had. He ruined Tamar’s life. He created division and heartache in his family. And two years later, he was murdered by his brother, Absalom.

Friends can enrich our lives. They can also destroy them. ''The wrong kind of friendship is often very painful,'' wrote Dr. Harriet Lerner, a psychologist and the author of ''The Dance of Connection.''

Perhaps the most important way in which we can help direct the path of our children’s lives is by constantly reminding them how important it is for them to not only have good friends, but friends who are good. It's a lesson we all need to take to heart. Some people need to be quarantined before they get a chance to infect us with their diseased values.

When the World Goes Viral

A Tribute to Senator Moynihan

Reacting to the Tsunami

A Front Row Seat to History
It Takes A Lot Of Faith To Be An Atheist
How Instagram Brought Back This Nostalgic Soup
What Makes Eli Run?
Comments
MOST POPULAR IN Current Issues
Our privacy policy