Dave Chappelle and the Space Jews 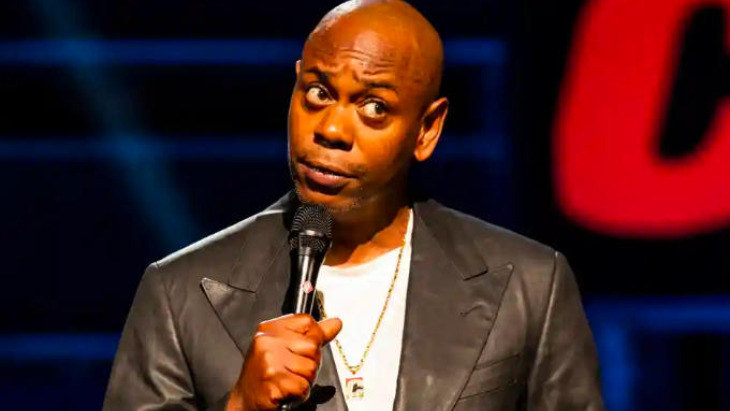 When a comedian offends minorities, they find themselves apologizing or facing career ending cancel-culture. Why do offensive Jewish jokes go under the radar?

You’ve probably heard about the controversy surrounding Dave Chappelle’s new Netflix special The Closer. The stand-up act has come under fire for being transphobic, sparking outrage and a much-publicized walkout by Netflix’s own employees.

You may have also heard that within the 72-minute special there are two jokes about Jews, peppered in, seeming completely out of place. The first one:

In my movie idea, we find out that these aliens are originally from earth – that they're from an ancient civilization that achieved interstellar travel and left the earth thousands of years ago. Some other planet they go to, and things go terrible for them on the other planet, so they come back to earth, [and] decide that they want to claim the earth for their very own. It's a pretty good plotline, huh? I call it 'Space Jews.'

There’s plenty to be offended about. It’s not like the Jews left Israel looking for a more tropical climate or cheaper housing. We were conquered, ravaged, massacred, and the survivors exiled as a permanent minority for the next two thousand years. But hey. It’s just stand-up comedy, not a history lesson.

But then, about 30 minutes later into the routine, Chappelle lobs this one:

There was a black man in South Carolina, during slavery who somehow got granted his freedom by his so-called master. And when his master granted him the freedom he also gave him a plot of land. Now it turns out this brother was brilliant. He had a good eye, good knack for farming. And he farmed this plot of land very successfully and made a lot of money, and this is where the story gets crazy. When he got all that money this [guy] bought some slaves… Not only was he a slave owner, he became a slave breeder. And employed tactics that were so cruel even White slave owners were like, “Yo, my man.” He was a wild dude, but he did it just because that’s what successful people did at the time. He just wanted to be down, what a f**** tragedy. How can a person that went through slavery perpetuate the same evil on a person that looks just like him. It’s mind blowing. And shockingly, they’re making a movie about him. Ironically… It is called Space Jews.

Chappelle makes the insinuation that after surviving the Holocaust, quite possibly the most horrific evil the world has seen in the modern era, the Jews have turned around and done that same evil to the Palestinian people to an even worse degree. It's not a new accusation. I just wish if Chappelle was going to perpetuate the modern blood libel, he would have found a funnier way to do it. Honestly, the joke is pretty forced.

I just wish if Chappelle was going to perpetuate the modern blood libel, he would have found a funnier way to do it.

Is this worth getting angry over? I don’t know. Most of the routine is dominated by Chappelle’s reaction to accusations of transphobia pertaining to his previous Netflix special. In that reaction, Chappelle weaves nuance, humanity, and a deeper level of understanding of cancel-culture within his comedy. I believe he genuinely wants to further the discussion, opposed to attacking or condemning the trans community.

But that nuance is completely absent from his Space Jews jokes.

The second, and perhaps far more troubling, point speaks to a bigger problem concerning antisemitism in our culture as a whole. Though there have been criticisms of the antisemitic jokes, they rarely come from non-Jewish sources. And this isn’t the only time comedians get a pass on antisemitic humor. During the roll out of the Coronavirus vaccine, Israel took unprecedented efforts, vaccinating over half the population in record time. Soon after, Michael Che made his infamous, “I’m going to guess it’s the Jewish half” joke on SNL’s weekend update. During the conflict between Israel and Hamas in May of 2021, both The Daily Show’s Trever Noah and Last Week Tonight’s John Oliver, unfairly slammed Israel while ignoring facts, context, and oversimplifying the conflict. None of the above-mentioned comedians have since apologized.

So why is it when a comedian offends minorities, they find themselves apologizing or facing career ending cancel-culture, while a Jewish joke here or there goes under the radar?

Punching Down, Punching Up

I believe the answer comes soon after the second Space Jews joke. It is there that Chappelle shares his experience about the first time he was accused of being transphobic.

...every time that I talked with anybody from the community since they always repeat the talking points from that article. My least favorite of which being, I hate this phrase, they say, “I was punching down on them.”

Punching down is a term that refers to someone in power criticizing someone less advantaged, while punching up means making fun of someone who is more powerful. The idea is that in comedy, if you’re making fun of the less fortunate or disadvantaged, you’re coming off as a bully. That’s what Chappelle was being accused of with these transphobic jokes. But when you make fun of Jews, it seems to be regarded as punching up.

Jews have consistently been minorities for the last two thousand years. In America, we are only 2.6% of the population, but according to a 2019 FBI crime statistic, Jews are the victims of over 60% of US hate crimes. Maybe it is because Jews are rich? But according to two major national studies,* between 16 and 20 percent of Jewish households earn less than $30,000 a year, and around seven percent of Jewish households earn less than $15,000. Compare that to the national poverty rate reported in the 2020 census, listing 11.4 % of the US population suffering from poverty.

Perhaps it is that Jews are considered disproportionately in positions of power. Presidential aides such as Henry Kissinger, Jared Kushner, Antony Blinken, Janet Yellen, and Merrick Garland comprise only a small list of past and present influential Jews in America. Clearly that must be proof that being a Jews means you can take some slings and arrows from late night and stand-up comedians. But does the success of a minority of a minority leave the rest of that minority vulnerable to unfounded criticism, ire hidden behind a punchline, and the perpetuation of lies? I don’t think so.

Should Jews band together to try to cancel these comedians the way they would for a transphobic or racist joke? Historically, I don’t think much good ever comes from silencing speech.

Should we launch a social media hashtag campaign to spread awareness that Jews really are on the punching-down side of the comedy aisle? No, Jews have always strived to overcome obstacles opposed to identifying as victims. Should Jews band together to try to cancel these comedians the way they would for a transphobic or racist joke? Historically, I don’t think much good ever comes from silencing speech.

Should we insist that comedy no longer punches up or punches down? That’s just unrealistic, besides, how many “why did the chicken cross the road, '' jokes can we come up with? So what’s the answer?

There are three levels of quality in discourse. The lowest level is talking about people. Jewish law prohibits speaking derogatorily about people and that's what fills the trashiest tabloids and gossip magazines, which focus exclusively on people.

The next level is talking about events or things. Sports, movies, cars. This isn’t particularly elevating, but you’re usually not tearing someone down (unless you’re focusing on the actors or the players, then you’re back to the lowest level.)

Finally, there are the loftiest topics, ideas. Religion, movements, education, politics (when you’re talking about policy and not politicians themselves). When we focus on ideas, we elevate our speech, our awareness, and our understanding of life.

When we use comedy to punch people, whether it is up or down, it can create stigmas, bolster prejudices, and concretize generalizations.

When comedy focuses on the absurdities of ideas, we get Abbott and Costello's “Who's On First”, a sketch celebrating misunderstandings. The iconic Dead Parrot routine from Monty Python, about a man desperate to convince a pet shop owner that his bird is indeed deceased rings true to anyone who has ever tried to cancel a phone plan or get their money back from any cable company customer service agent. Even racially motivated comedy from Chris Rock, Key & Peele, and much of the work of Dave Chappelle lampoons the deeper nature of race relations more so than just the stereotypes themselves.

When we use comedy to punch people, whether it is up or down, it can create stigmas, bolster prejudices, and concretize generalizations. Though comedians may not be hate-filled themselves, their words can give tacit permission to an audience member to stoke their hateful feelings.

But when comedy punches ideas, that can transcend barriers, engaging all minds without making anyone a target for ridicule. Dave Chappelle has reached this level many times in his career. I just wish he was willing to do it for the Jews rather than taking the cheap shot.

So Dave, please stop punching (whether it's up or down) on my people.

The Einsatzgruppen and the Beginning of the Systematic Murder
Don’t Believe in Other Gods Versus God is One
Seeing Without Eyes
Why Shouldn’t We Eat Whatever We Want?
Comments
MOST POPULAR IN Israel
Our privacy policy
Aish.com Is Looking for Great Writers