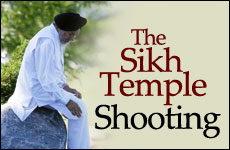 Empathy takes work, but it’s the basis of human decency.

The headline “Six Dead in Sikh Temple Shooting in Wisconsin” flashed up on my computer and I gasped. Wasn’t my oldest friend at a Sikh retreat in Wisconsin? Frantically, I searched for her cell phone number.

Harvind and I have been buddies since high school, when we were in the same English and European History classes. That alone might not have been enough to make us best friends, but taking an after-school job stuffing envelopes in a local office together did. For two hours each afternoon during our final year of high school, we sat together, folding letters, and talking about our classes. Together we thrashed out the weighty themes of literature and history, we discussed human nature and our dreams for the future; that year of enforced intimacy created a bond for life.

I thought of the last time I’d seen Harvind. My husband was ill, and she’d come to visit. I pictured her sitting in my kitchen, sipping tea – she’s the one who taught me how to make real chai, just like in India (none of those pre-flavored tea bags for her) – talking with us about current events, making us laugh. In the years since high school, we’d each taken different paths: I’d become a religiously observant Jew, while Harvind became an observant Sikh. Although there were many important things we couldn’t share, we remained close. We still loved calling each other and discussing those same big issues we used to talk about back in school. Had our friendship just come to an end in a bloodbath in Wisconsin?

After a few tries, I finally reached Harvind; thank God she was unharmed. And as I hung up my phone I was shocked at how disconnected I felt from everyone around me. I thought back to the terrorist tragedy of 9/11; the reaction of everyone I saw had been visceral, immediate. People felt that it was they, personally, who had been attacked, and I wondered why this latest terrorist act failed to elicit the same level of instinctive distress.

Later that day another high school friend called me. “Harvind’s okay,” she began, the relief in her voice was clear. In the midst of frantically trying to call our friend, she told me, she was amazed to see life going on as normal. Nobody around her took the attack seriously.

Perhaps it was the exoticness of the victims. At times, it can seem that people who stick out – who look different from the mainstream – are almost judged by different rules. Just after the attack, in fact, some Sikhs explained they were targeted because they look Muslim – as if that would somehow excuse a bloody massacre in a house of worship. Other commentators rushed to explain who Sikhs were, as if demystifying them would make them seem more human, would somehow get more people to care.

As I reflected on my panic when I thought Harvind might have been caught up in the tragedy, it occurred to me that such caring was a gift. The Torah gives an enormous task to live up to. It commands us to feel other people’s pain, and – more than that – to rejoice in their happiness too, which can sometimes be even more difficult. “You shall love your neighbor as yourself” (Leviticus 19:18). The great sage Rabbi Akiva commented that this commandment is the fundamental principal of the entire Torah. This was the principal behind Hillel’s famous injunction, when asked by a non-Jew to sum up the entire Torah quickly, in the time that one could balance on one foot: “Do not do to others what is hateful to you – all the rest is commentary.” Empathy is the basis of human decency, the bedrock from which flows all other good deeds.

We want to be empathetic people. We each try to care about others. But it’s so difficult. Cultural differences get in the way. Divergent beliefs make us feel less interested in others. Sometimes it’s fatigue; how many times have I heard about a tragedy in a far-off place, and felt instead of connection, weariness? Some places seem so far away, so wracked by war or poverty or violence, it’s almost impossible to feel for them. It’s one thing to worry about a close personal friend. In those moments when I tried to phone Harvind, I had a horrible image in my mind – of her or her kids crouching behind a door, hiding from the shooter. It felt so real to me.

This is the frame of mind that Judaism asks of us. Take the time to make things real. Feel the pain. Imagine it was your family – how would you react? It’s a tall order, but God has high hopes for us.

Masculinity is Not Toxic

Cancelling 'Anti-Semitism'
Don’t Believe in Other Gods Versus God is One
Seeing Without Eyes
Why Shouldn’t We Eat Whatever We Want?
Comments
MOST POPULAR IN Current Issues
Our privacy policy
Aish.com Is Looking for Great Writers