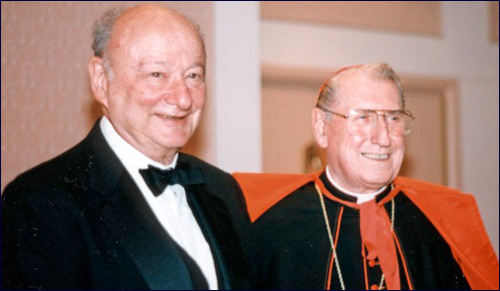 Does it really matter?

So it turns out the Cardinal John Joseph O’Connor, the Catholic Church’s top official in New York for 16 years until his death in 2000, was a Jew.

Mary O’Connor Ward, the cardinal’s 87-year-old sister, recently discovered that their mother was Jewish, a daughter of an Orthodox rabbi, while digging into her genealogical roots. Their Prussian-born maternal grandparents were Gustave Gumpel and Tina Ruben, who are buried in a Jewish cemetery in Fairfeld, Conn.

According to the New York Times, Gustave Gumpel was the rabbi of B’nai Israel and a butcher in the late 1800s. His first wife died in 1890, and his second wife, Tina, died 10 years after coming to the United States, leaving Rabbi Gumpel to raise a large blended family on his own. Cardinal O’Connor’s mother, (Deborah on her 1887 birth certificate, Dora in the 1900 census, and Dorothy when she converted to Catholicism in 1908) was a toddler when her mother died. She was raised by two half sisters in difficult circumstances and fled from home as soon as she came of age, never to come back. Apparently two other sisters also left the family and their Jewish heritage behind.

My gut reaction to reading about Cardinal O’Connor’s Jewish roots was one of sadness (different than the JTA who wrote, “Is this really a big deal? Let’s say the cardinal really was Jewish. It runs in the family, because so was his boss”). This is not a “cool” story. It's a human tragedy: a young girl, bereft of her mother, flees from her home. And it’s a Jewish tragedy: a Jewish girl abandons her religion and people.

Cardinal O’Connor was a powerful leader who was a staunch defender of the Jewish people. He spoke often about what he had seen at Dachau as a Navy chaplain, fought for Soviet Jewry, and played a role in the Vatican’s recognition of Israel. Upon his death the New York Times wrote that he was a “towering presence, a leader whose views and personality were forcefully injected into the great civic debates of his time, a man who considered himself a conciliator, but who never hesitated to be a combatant."

Imagine what he would have accomplished for the Jewish people if his mother would have remained committed to Judaism and given her son a strong Jewish education.

Just imagine what the Cardinal would have accomplished for the Jewish people if his mother would have remained committed to Judaism and given her son, Yochanan Yosef, a strong Jewish education. Of course we can’t judge his mother, but we can mourn the loss to the Jewish nation. The reality of assimilation isn’t fully expressed through statistics alone. Every Jew is an entire world. The toll of assimilation is more acutely felt when you think about the mindboggling loss of Jewish individuals, families and future descendants who could have made enormous contributions to the Jewish people.

Link in the Chain

The same day I read about Mary O’Connor’s discovery through genealogy of her family’s Jewish lineage I received a file from my wife’s cousin that conveys the thorough research into my wife’s grandmother’s family tree. It turns out that even though she herself wasn’t especially religious, she was a direct descendant of some of the greatest rabbinic figures in the last 1000 years. Rashi, the foremost commentator on the Chumash and Talmud, is her 25th great grandfather. The Shach, Rabbi Shabtai HaCohen, and the Rema, Rabbi Moshe Isserles, are her 11th great grandfathers. The list includes a wide range of European Jewish leaders, judges, and authors since the Middle Ages. We were amazed. Who knew?

Chances are very likely that if any Jew today would trace their direct lineage back 25 generations they would also discover that they are descendants of some of the greatest leading scholars and Jewish leaders in Jewish history.

What difference does it make? Two things strike me.

One, it makes the chain of Jewish history far more vivid when I see plotted out on paper the ancestral sequence linking my wife’s grandmother, who died this year, directly to Rashi. I am not just a Jew living in the present in a vacuum; I am part of dynamic chain of transmission that stretches a few thousand years, and I am the present link in the chain.

And knowing the illustriousness of my family’s personal lineage gives me a greater sense of the privilege and responsibility to carry that legacy forward.

I wonder if things would have been different if Cardinal O’Connor had discovered as a young child that he was a direct descendant of the Vilna Gaon, Rashi or King David.

France and its Jews

Battling Deceptive Missionary Tactics
The Power Of Prayer
Va’etchanan 5782: A for Effort
Can You Show Me This "God?"
Comments
MOST POPULAR IN Israel
Our privacy policy
Aish.com Is Looking for Great Writers