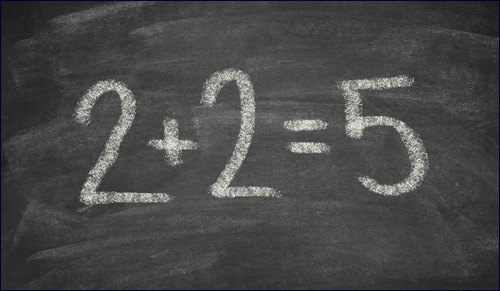 While God may do the impossible – even the paradoxical – He does not do the inconceivable, the irrational, or the just plain wrong.

A reader recently wrote me asking the following question:

“Is God so powerful that He can change what is truth? Like 2+2=5? If God created something from nothing, does that mean truth is arbitrary?”

I thought this was an excellent question, as well one that has been expressed in many ways. As far as 2+2=5, this may be familiar to many of us from George Orwell’s political-treatise-cum-dystopian-novel Nineteen Eighty-Four, but the concept has a large number of real-life precedents:

There are far more examples than these (including a Radiohead song).

So, for some reason, humanity is really enamored with the idea of 2+2=5, much more than 1+1=3 or “the cow says woof.” But can God make it so? Let’s hold that thought for a moment and address God doing the impossible.

God has a long track record of performing impossible feats. He split the Red Sea (Exodus chapter 14), He gave a donkey the power of speech (Numbers chapter 22), He made iron float (II Kings chapter 6), and much more. Now, you might be skeptical and say, “Those are miracles, from Bible times. How do I know they even happened?” Well, God does plenty of impossible things here and now:

There are many more examples of quantum weirdness, all observable and part of “nature” (whatever that means!). So, to paraphrase Lewis Carroll, God does six impossible things before breakfast. (Your breakfast, not His; God doesn’t eat.)

While God may do the impossible – even the paradoxical – He does not do the inconceivable, the irrational, or the just plain wrong. Some things are hard-wired into the fabric of reality and those things are non-negotiable.

2+2=5 is an example of this. The very definition of 2+2 is 4. To make it be 5 would be to deny its most basic essence. This is like asking “Can God make a six-sided triangle?” The answer is clearly no, because, by definition, a triangle has three sides. If it doesn’t have three sides, it’s not a triangle! Similarly, 2+2 has to equal 4. It’s a fundamental truth.

I said this kind of question manifests in different ways. Another popular manifestation is “Can God make a rock so heavy that He can’t lift it?” Again, the answer is no. First of all, God doesn’t have a body so He doesn’t lift things physically. That notwithstanding, the concept of “too heavy” doesn’t apply to God. Is there a circle too blue to smell? That question makes no sense because its various components have nothing to do with one another. Similarly “too heavy” has nothing to do with God. Conceptually, it’s a nonstarter.

God also can’t create another Infinite Being like Himself.

Maimonides addresses another question like this in his Guide for the Perplexed. His example is the question of whether or not God could create another being like Himself. He rejects the idea unequivocally. It is inherent in the concept of God that He is One. God’s “inability” to violate this rule is not a weakness on His part, God forbid. Rather, the question itself is irrational.

This next example is my own (at least I haven’t seen it elsewhere): G-d told Moses that no human could comprehend Him and live (Exodus 33:20). Couldn’t G-d enable a person to comprehend Him and live? No, because that would defy the definition of what it means to be human. There are limits to what a human can comprehend; if God were to grant a person that level of enlightenment, like a six-sided triangle, he would no longer fit the definition of human.

Russian novelist Ivan Turgenev wrote “Whatever a man prays for, he prays for a miracle. Every prayer reduces itself to this: Great God, grant that twice two be not four.” That is incorrect. Such a prayer would be uttered in vain. God does grant prayers. He even works miracles (though not on demand). What He doesn’t do is violate the basic definitions of Himself, the universe, or mankind. This is no shortcoming on His part. The shortcoming would be in a prayer whose basic premise is flawed.

This article originally appeared on OU.org