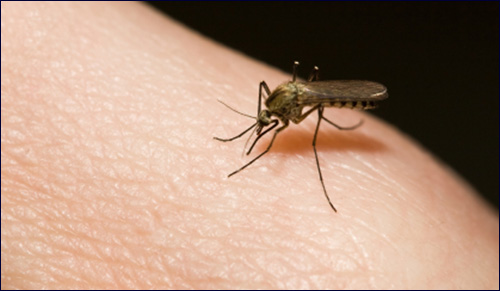 The mosquito landed on the forehead of my unsuspecting son. I went in for the kill.

I barely saw it. It was a mosquito cruising the area, looking for its next victim.

I followed it with my eyes. It had been a long, hot summer filled with too many mosquito bites and I wasn’t about to let this one prey on someone in my house. I lost sight of it for a second and then suddenly it was there – on my five-year-old son’s forehead. The nerve! My poor son was absorbed in the book he was looking at and had no idea that at that very moment a heinous villain was about to suck his blood.

I jumped up, readying my hand, and leapt toward my son and then -- smack! – I squashed the mosquito with one fell swoop.

He looked up at me in a mixture of confusion, shock, pain and utter bewilderment. (I’m no angel, but smacking my kids is thankfully not among my more challenging habits.) “Wh-wha-what? Wh-wh-why did you do that?” he asked.

“A mosquito! A mosquito had landed on your face, Cute Guy! It was trying to take a bite out of your head and I wasn’t about to let him get away with it. I’m so sorry; I didn’t want to smack you – I was just trying to get that mosquito.”

His baffled expression turned into one of understanding and love. “It’s okay, Mommy. Thanks for getting it!”

I quickly forgot the incident until I received my own “slap” on the face.

I had been struggling with a difficult relationship, and things were only getting worse. Because it wasn’t a family relationship, I had left it on the back burner for a long time – too long – and now things were starting to boil over. I finally approached someone older and wiser and asked if I could have her advice. I must have been expecting sympathy, concern and understanding – and not real advice – because her words deeply and painfully shocked and stung me.

“I’m going to be honest. Brutally honest,” she said. “Okay?”

I nodded. I could handle the truth, right?

“It’s your fault. You’re the problem – not her. You’re enabling her. You’re setting the pattern for this behavior. You’re forcing her into this place. It’s up to you to set the boundaries, not her. She’s acting fine, given the circumstances. If you really want to take care of things, stop playing the victim.”

I was too stunned to utter the thousand ifs, ands and buts that would normally pop into my mind at such a statement. I was embarrassed that this special, trusted mentor thought I was the problem. I was insulted – how could she accuse me of being a self-created victim? I was stung; she hadn’t uttered one word of sympathy. The whole encounter had been so harsh.

Tears pricking my eyes, I thanked her and left. I reminded myself that I had approached her. That I had sought her advice. That I trusted her – and continued to trust her. Then I tried to console myself that she must have thought I was big enough to handle such a direct, chilling rebuke.

And then I suddenly remembered my son and the mosquito. I had come out of nowhere and slapped him – leaving him completely surprised. Wasn’t the “slap in the face” I had just received almost the same thing?

I knew she had done it out of love.

That insult, that challenge – the slap – is meant for us.

Every insult we receive, every challenge we endure, every rebuke we face is being directed at us by our loving Father in Heaven. It’s a hurdle we have to overcome to bring us one step closer to perfection. Yes, He uses a messenger to carry out His work, but that insult, that challenge, that test – the slap – is meant for us. It’s meant to help us improve ourselves in some way, to serve as a message of some kind. It’s no random occurrence; it’s a message from God.

When you look at it this way, your whole perspective can change. The same hand that gives “the slap,” gives the good; in fact, the “slap” is good.

The more I thought about her words, the more I realized she was right. Every relationship has two sides. If my friendship had improper boundaries, it was up to me to set them. If my friend’s neediness was getting extreme, I could stop enabling her by giving her encouragement and empowering her. I didn’t have to give in to the attention and sympathy she craved. If there was a problem in the relationship, I could try to fix it; I didn’t have to point fingers. The more I thought about it, the more I saw the truth of my advisor’s words. And as painful as it was for me to admit, I really had been an enabler – and a self-created victim.

Sometimes we get a slap on your face and feel angry and stung. Then we look up, only to realize it was our own mother, who loves us, just squashing a mosquito.

May we all merit to see the squashed mosquitoes – and the loving Hand -- behind every slap.

Free Will and its Deniers
The Blue Beyond
Great Place to Live
Is Eating Supposed To Be Spiritual?
Comments
MOST POPULAR IN Spirituality
Our privacy policy