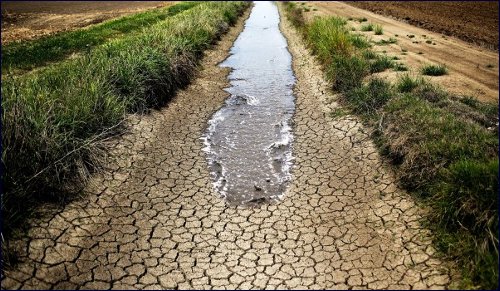 Perhaps the most amazing thing about anti-Semitism and the world’s hatred of Israel is illustrated by Cape Town’s frightening water crisis.

Cape Town is one of the most beautiful cities in the world. Until just recently it was also one of the most popular tourist destinations in South Africa, responsible for almost 10 percent of the country’s $33 billion economic output.

But the city is now facing a crisis of unimaginable proportion. The sources of water have dried up and the water taps will soon have to be shut off completely. Current estimates put that day – now called “Day Zero” – sometime in mid-April.

As of now, there is water rationing previously unheard-of in modern civilized cities. People are urged not to flush toilets, to shower and bathe infrequently with minimal water, and walking around with unwashed hair is considered a sign of national patriotism. The government admits they are facing a probable total collapse of their economy, their infrastructure, and their way of life.

As soon as Israel became aware of Cape Town’s water problem, it volunteered assistance, making clear their ability and willingness to help. They were rebuffed.

Cape Town has been aware of this threat for some time – and they also had an easily accessible solution. Israel is a country which achieved the scientific know-how to make its desert bloom, its minimal water supply to suffice for its needs, and the desalination of seawater for everyday purposes a reality. Israel has learned how to recycle about 85 percent of its water and has achieved what many considered impossible: making water readily accessible to all of its inhabitants. As soon as Israel became aware of Cape Town’s water problem, without any hesitancy it volunteered assistance, making clear their ability and willingness to help.

Former Israeli Ambassador to South Africa Arthur Lenk, current Ambassador Lior Keinan, and Israel’s economic attaches to South Africa all made repeated overtures to the relevant bodies to assist with the Cape Town water crisis. Scientists were prepared to share their knowledge. Volunteers were ready to come to implement them. Organizations were ready to help in the planning and even in the financing for what was required to prevent Day Zero from becoming a reality.

But the governing body of Cape Town sides with the Palestinians. That makes Israelis the enemy. And that allowed hatred to trump sanity and enmity to prefer calamity over offered salvation.

“Hating people is like burning down your own house to get rid of a rat.”

Harry Emerson Fosdick put it well when he famously said, “Hating people is like burning down your own house to get rid of a rat.”

In the early part of 2016, when it already became clear that parts of South Africa would be facing one of the most severe droughts in its history, an important conference was called to make plans for the initiation and implementation of specific programs to prevent catastrophe. Listed on the program as one of the delegates was Israel’s ambassador to South Africa, Arthur Lenk, who had already spent considerable effort in educating and assisting the region wherever possible. No sooner did this become public than Prof Lorenzo Fioramonti of the University of Pretoria, withdrew his participation. That was immediately followed by the BDS movement successfully lobbying the South African government to entirely cancel the water conference due to Israel’s participation.

Thanks to the growing influence of the increasing Muslim population and the leadership of the pro-jihad President Jacob Zuma aligned with the BDS, South Africans rejoiced at their ability to “tell off the Israelis” and to deny Israel the ability to claim credit for any humanitarian aid.

It is hard to imagine how much joy there must be today for a people to know that soon they are destined to helplessly watch their citizens die of thirst rather than accept aid from “those accursed Jews.”

It is a story of tragedy in South Africa – but it is more than that as well. It is a paradigm of the conflict between the world and the Jews, between the Arabs and the Israelis, between those consumed by a hatred and those anxious to extend a hand of help and of friendship to even the bitterest of enemies.

I find it significant that the Cape Town crisis revolves around water. Water has special meaning in Jewish tradition. It is so essential to life that it is the most frequently used metaphor in Judaism for Torah itself. Water and Torah are both indispensable for survival. When the Jews who left Egypt were in the desert of Sinai they could not, the Torah tells us, go three days without water. For that reason the sages instituted the public reading of the Torah on the Sabbath, Mondays and Thursdays – so no Jew would ever go three days bereft of the life-giving words of God’s gift to human kind.

We are the people of the book. Our role, as those designated to become – in the words of Isaiah – “a light unto the nations”, is to bring to the world the blessings of the Almighty’s spiritual waters. And yet, people thirsting for meaning in their lives and for purpose to their existence, prefer to reject us, even at the cost of their own survival.

Here is a profound example for the irrationality of hatred.

As my heart goes out to the victims, I have one great hope: If only the crisis of Cape Town could open the eyes of Israel haters to how much they have to gain if they would but choose peace over war, life over death and mutual blessings over eternal strife and conflict.