Israel: Where We Belong 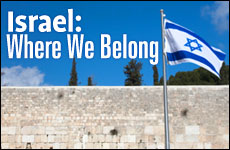 Creating our connection to the land of Israel.

When we talk about Yom Ha'Atzmaut, Israel’s Independence Day, the question we need to ask ourselves is where we are in our relationship to the land of Israel. It’s a day we can celebrate in various ways, but it behooves us to make it a day of introspection.

We all know and believe that the mashiach can come at any time and is just around the corner, but how do we react to that? The Talmud (Shabbat 31a) writes that on the Day of Judgment, we will all be asked if we longed for the salvation. The Aderet v’Haemunah explains that this question means to ask if we put longing for the salvation as the single focus of our lives, and how we applied our individual lives to achieving this national goal. Are we only caught up in our individual lives and our development, albeit our spiritual development, or are we able to focus on a cosmic vision of our nation as a whole? We must ask ourselves if we are trying to move history forward and bring the conclusion of the exile. If we are honest with ourselves, we know that this question is something in which most of us fall very short. We all believe in the coming of the mashiach, but do we really believe?

While this reflects a general human tendency towards Israel, the Jewish people’s connection goes further. The first command given to the first Jew was the commandment to Abraham “lech lecha,” go to the land of Israel. Furthermore, all the commandments and promises that were given to our Forefathers are related to the land of Israel because that is the place where Torah can be upheld in its fullest sense. Do we really feel this sense of connection?

And of Zion it shall be said “Man and man was born in her and [God] will establish her. R' Maiysha, the grandson of R' Yehoshua ben Levi, says, both those born there and those who long to see her. (Babylonian Talmud, Ketuvot, 75a)

During the British rule of Palestine, there was a quota of how many Jews could come from each nation into Israel. There was a group of Jews from Romania who wanted to emigrate to Israel but the quota from Romania had already been filled. They asked Rav Chaim Sonnenfeld if they could lie and create papers that said they were from Czechoslovakia, whose quota had not yet been filled, and he said they could not, because it would be dishonest. They then asked if they could create papers to say that they were from Palestine, and he responded that it was permitted, and it wasn’t dishonest, based on this Talmud that anyone who desires to see Israel is considered to have been born there. Every Jew is intrinsically connected to the land of Israel, even without having ever set foot there.

Every Jew is intrinsically connected to the land of Israel, even without having ever set foot there.

Rav Aaron Soloveitchik, in his book “Logic of the Heart, Logic of the Mind” in an essay called “The State of Israel, a Torah Perspective,” points out that at the end of the chapter in Psalms, quoted in the Talmud, King David writes that both the singers and the dancers have their thoughts there [in Israel]. Rav Soloveitchik interprets this to mean that the singers refer to religious Jews who know the words to sing, and the dancers refer to those that can only dance and don’t know the words to sing, namely non-religious Jews, and King David writes that both have their close connection to the land of Israel. Every Jew feels that Israel is our homeland, and that is where we belong.

And the daughters of Reu'el (Yitro) came to their father and he asked them, "Why are you back so quickly today?" And the said, "An Egyptian man (Moses) saved us from the shepherds." Exodus, 2:18-19

(Joseph said to the wine steward) Please do this kindess for me and remember me to Pharaoh to take me out of this house. For I was stolen from the land of the Hebrews. Genesis, 40:14-15

The Midrash comments that one who refers to himself as being from Israel will merit being buried in Israel, and one who does not refer to himself in that way will not. Joseph connected himself to the land and therefore his bones were carried for 40 years in the desert and buried in the land. Moses identified himself as an Egyptian, and therefore did not merit to be buried in Israel. Rabbi Zalman Sorotzkin, in his Oznayim Latorah, questions this Midrash, Joseph was born in the land of Israel, so of course he said he was from there, whereas Moses was born in Egypt, so why would he say he was from Israel?

He answers that from the moment God promised us that we were going to inherit the land of Israel, it belonged to us, no matter where we were. When you ask any Jewish person what land he or she is from, the answer must be from the land of Israel, irrelevant of whether the person ever even stepped foot in Israel or not. It’s not just a question of whether you are an American Jew or a Jewish American, but rather we need to recognize that our core is intrinsically connected to the land of Israel. We may temporarily be physically from somewhere else, but our roots are in that place where we desire to come to and be.

The Torah in Parshas Re’eh (11:12) describes the land of Israel as a place that is constantly under God’s scrutiny. It’s the difference between a parent who only desires to speak to a child once a year to one who desires to speak to his or her child every day, a few times a day. The Siftei Chaim writes that the Divine providence is much stronger in Israel, because of this deep closeness He has with us there. It’s a connection of the love and closeness between the Jewish people and the land of Israel.

The Nesivos Shalom writes that just as in time, the Shabbos gives light and meaning to the whole week, the land of Israel animates the rest of the world. Israel is the land where we can have prophesy and where we can feel and tap into the feeling of closeness and specialness to Hashem.

It can’t just be a hope, but rather it demands action.

Rav Yaakov Emden, in his siddur Beit Elokim, writes that it’s not enough just to face Jerusalem in prayer and go through lip service of the centrality of Jerusalem, but rather we have to have the intention to bring it to the world of actuality. It behooves every Jew to declare in their heart to make aliyah to Israel. When we think about a retirement home, it shouldn’t be a condo in Florida but rather an apartment in Israel. It can’t just be a hope, but rather it demands action.

Rav Yosef Dov Soloveitchik, in his Kol Dodi Dofek, writes that when the Torah (Lev. 26:33) says that God will bring the land into desolation, our Sages interpret this as a good thing, because our enemies will not find any gratification in the land since it will be desolate of all its inhabitants. We know that throughout history, none of the nations that conquered the land of Israel were able to settle the land, as the agriculture refused to cooperate with them. Had there been an actual sustained presence there, strangers would have consumed its goodness and food and the rights and claims of the Jewish people would have been nullified. Therefore, the land of Israel did not betray its people. She remained faithful to them and awaited her redeemer. When the possibility came to return to the land that withheld its treasure from strangers and guarded them for us, how could the Jews not fulfill the commandment and run with joy and enthusiasm to build and settle there?

This Yom Ha'Atzmaut, we must come in contact with the land, hear its song, and remember that the land of Israel has been waiting for us. We need to see and understand what a blessing Israel is for us. The challenge from a distance is to open ourselves up beyond falafel, blue and white, and a dollar commitment. We must connect to Israel emotionally and spiritually, so that while we may be living elsewhere, we feel the reality that our true home is only in Israel and that we are truly its citizens. By doing so, we will truly have a handle on longing for the redemption which should come speedily in our days.

This essay was transcribed by Deena Klein and appears on Yeshiva University's website.

Mrs. Shira Smiles is on the faculty of Darchei Binah Women's School for Advanced Torah Studies. A sought-after lecturer, seminary teacher, and curriculum developer, Shira has touched the lives of thousands of women over the past two decades through her teaching and writing.

What Rosh Hashanah Says to Us

Should Passover be Celebrated in Auschwitz?

Chanukah: The Fight for Freedom
BBQ Bourbon Cheese Kugel Recipe
Korach 5782: Visit to Lift the Spirit
That Time The Ivy League Found A Way To Limit Jewish Enrollment
Comments
MOST POPULAR IN Spirituality
Our privacy policy