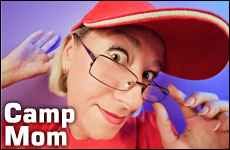 What if there was a summer camp for moms?

At shul last week, I asked my friend Jana how she felt about the countdown till summer vacation. “I can’t wait,” she said, smiling broadly. “No more power plays to get the kids up for school, and I can relax about bed times, too. It’s my favorite season.”

“Not mine,” disagreed Sharon, suddenly losing interest in her spicy sushi roll. “I dread summer. How am I supposed to orchestrate four kids’ different camp and activity schedules while I’m working full time? It’s a logistical nightmare. I vote for year-round school!”

“I vote for year-round school!”

Over the years when my kids were still young, I held more of a middle ground position about summer. As a freelance writer, I could dial down my work load, allowing me the luxury of doing “fun” things with the kids. Once, I drove a van full of kids to a newly opened science center they had no interest in seeing. I was the only one to lie down on the bed of nails exhibit, the kids refusing on the basis that the nail bed didn’t look “comfortable.” (This was years before they went to Israel for yeshiva or seminary and discovered Israeli dorm mattresses.) I can state with confidence that indeed, lying down on many hundreds of nails is far more comfortable than lying on a single nail, since body weight is distributed more evenly.

My curiosity on this issue was sated, but, disappointing for me, my kids’ curiosity was never awakened. Instead, they were excited by the digital jam session, where they lavished more than one hour pretending to be rock stars, claiming they were learning about “communications systems.” I was reduced to extortion, offering them a stop for ice cream on the way home if only they would get up close and personal with some exciting bacteria and fungi in the biology lab. Look, all I could do is try.

Despite these occasional activity flops, during summer I never missed the midday calls from school from my kids alerting me that a) he has forgotten his lunch (again) but cannot ask his best friend to share because his friend eats peanut butter and my son hates the stuff; b) she has forgotten her science report and will get marked down if I don’t bring it over immediately; or c) she has a violent stomach ache and must come home instantly – an occurrence that sometimes eerily coincided with the forgotten science report.

I worked to maintain a laid back attitude during summer, even when I came home to discover the kids’ new motto had become “If you can’t stand the heat, leave the refrigerator door open.” (This would not have happened had they only gone to that museum exhibit on the history of refrigeration and had learned how much electricity is wasted by such reckless behavior.) I reminded myself to have a “gam zu la tova” attitude (i.e. “this too is for the best”) when I encouraged them to open a lemonade and cookie stand. I supervised their creative baking efforts as they left a tornado of flour, sugar and eggshells in their wake. They were thrilled by their entrepreneurial success, pulling in nearly forty bucks, but the enterprise cost me nearly seventy-five: ten bucks for ingredients and sixty-five for a chiropractor visit, since I threw my back out schlepping a heavy outdoor table to the street corner for business to open. Still, I dared not complain: no one from the city shut down our operations for lack of a permit.

Besides, entertaining the kids at home was far more economical than sending them to sleepaway camp. This process was only slightly less daunting than applying for acceptance to Harvard, requiring numerous character references and a whopping deposit by the end of January to hold the coveted positions. Naturally, the more expensive the camp, the more likely it was we’d get calls from the kid claiming severe homesickness, an aversion to their bunkmates, and demands to be brought home. Now.

The slick promotional videos for camp made me pine for a kosher Camp Mom. I didn’t want the same manic activity schedule beginning at daybreak and lasting till midnight, but I loved the idea of a place for moms to commune during late night swims, go paddle boating, and tie-dye three-quarter length tee-shirts. I fantasized about banging on the dining room table with my friends as we burst into song spontaneously – an understandable reflexive reaction to the novel sensation of having wait-staff serve us mouth-watering cinnamon buns still steaming hot from the oven. I would laugh off any concern about calories, since I’d surely burn them off playing sand volleyball, doing Kundalini yoga (Mom’s Camp division only) and building set scenery. There would be no broom hockey, because no camp tailored for moms would dare offer any activity containing the word “broom.”

Alas, I never discovered this Gan Eden of camps for moms, but it’s probably just as well. After shelling out so many shekels for our kids to go to camp, I probably couldn’t have afforded it anyway.