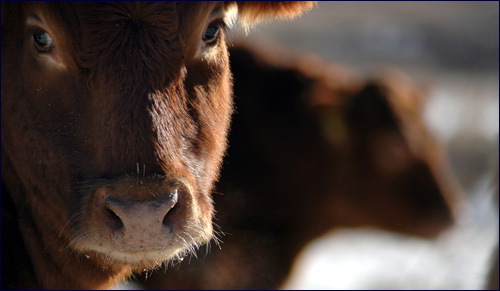 It’s a veiled way of saying that Jews and other minorities are no longer welcome.

The paper warned, “Beef and lamb from animals killed in ‘cruel’ ritual ceremonies are being sold in mainstream butchers, restaurants and supermarkets across Britain”, as if kosher meat was somehow repugnant and the Jews who eat it menacing and dangerous.

Across Europe, such attitudes are increasingly common. The British Veterinary Association, the Royal Society for the Protection of Animals, the group Compassion in World Farming and other organizations have all cast kosher meat production as uniquely cruel, and made banning kosher slaughter (as well as Islamic slaughter, called dhabihah) top priorities: they’ve organized petitions, slandered kosher food in letters to newspapers and journals, and run inflammatory advertisements.

Spurious attacks on kosher and Islamically slaughtered meat are whipping up prejudice across Europe, explains Shimon Cohen, campaign director of Shechita UK, an organization in Britain that educates the public about kosher slaughter, in an exclusive Aish.com interview. The relentless drumbeat of negative press is turning people against kosher food: one 2013 poll found that fully 45% of Britons were in favor of banning kosher meat outright.

Ironically, given all the smears being made about the kosher method of killing animals for food, shechita is among the most humane. In shechita, only animals that are healthy and uninjured are used for food. A specially trained butcher called a shochet, who has trained extensively, makes a rapid incision with an instrument that is surgically sharp across an animal’s neck, severing all the major blood vessels and structures in one instantaneous moment. This causes the animal to become unconscious immediately and results in a quick, near-painless death. Only one animal at a time is killed, and no animals are ever allowed to witness the death of another living being.

Slaughtering animals is never a pleasant topic, but the kosher method ensures that the Jewish injunction tza’ar ba’alei chayim, the prohibition to cause pain to animals, is preserved.

In many western countries today, non-kosher slaughter is preceded by “stunning”, a brutal method that was originally developed to facilitate the killing of large numbers of animals at once, in factory-like conditions.

According to Britain’s Royal Society for the Protection of Animals (RSPCA), most stunning – particularly of cattle – involves “A gun fir(ing) a metal bolt into the brain of the animal”. For poultry, the RSPCA, explains, stunning is done differently: “Birds are hung upside down by their legs on metal shackles along a moving conveyor belt. They move along the production line to a stunning water bath; when the bird’s head makes contact with the water, an electrical circuit between the water bath and shackle is completed, which stuns the bird. The conveyor belt then moves the birds to a mechanical neck cutter, which cuts the major blood vessels in the neck.”

In 2014 the head of Britain’s RSPCA called for the immediate ban of kosher (and Islamic) slaughter on animal rights grounds, calling the ban of kosher meat “one of the most important issues on our radar”, insisting the only humane way to kill animals is to first brutally “stun” them. (Some Muslim authorities allow animals to be stunned before being killed; as kosher laws mandate that animals cannot be injured before they are slaughtered for food, stunning is not allowed in kosher food.) Jewish authorities maintain that kosher shechita – in which a cut to the animal’s neck renders instantaneous unconsciousness – effectively stuns animals.

Nevertheless, the slanderous and dangerous claim that kosher slaughter is somehow barbaric has been widely adopted Europe; many are working to ban kosher shechita outright.

Switzerland was the first European nation to ban kosher slaughter, in 1894, in a campaign that was seen at the time as a clear message that the country’s Jews were not welcome. In 1929, Norway banned kosher slaughter amida highly-charged, anti-Semitic debate. When the Nazis came to power in Germany in 1933, one of their first acts was banning kosher slaughter.

Today, many European countries are attacking kosher slaughter once again.

“There is growing attention towards Muslim communities in Europe” explains Shimon Cohen from Shechita UK. “One way to curtail Muslim communities without sounding like a racist is to attack ritual slaughter.” Just as Switzerland sent a clear message that its Jewish minority was not welcome when they banned kosher slaughter over a century ago, activists and lawmakers across Europe today are sending a similar message of unwelcome to Muslims today by seeking to ban religious slaughter methods. Jews in Europe are “collateral damage,” Mr. Cohen explains.

In 2013, Poland introduced a ban on kosher and halal slaughter. After the Union of Jewish Religious Communities challenged the ban in court, it was struck down in 2015 on the grounds of ensuring religious freedom.

In 2014, Denmark’s government banned kosher and halal slaughter, as well as the production of kosher and halal meat, after years of campaigning from activists. Then Minister for Agriculture and Food Dan Jorgensen told Danish TV that “animal rights come before religion”. Russia’s Chief Rabbi Berel Lazar at the time accused those who attack kosher slaughter of being anti-Semitic and “trying to fight Judaism” by demonizing kosher food and Jews.

Sweden has banned the kosher slaughter of cows ever since the Nazi era, in 1937, but the ban did not extend to chickens until 1988. That year, it was mandated that birds be electrically “stunned” before slaughter, rendering Jewish shechita illegal.

Two of Belgium’s regions have recently voted to ban both kosher and halal slaughter, starting in 2019. “This decision, in the heart of Western Europe and the center of the European Union, sends a terrible message to Jewish communities throughout our continent that Jews are unwanted,” explained Moshe Kantor, President of the European Jewish Congress. “It attacks the very core of our culture and religious practice and our status as equal citizens….”

In Britain, the far-right UK Independence Party has called for a complete ban on kosher (and Islamic) slaughter of meat in Britain. The party isn’t generally seen as concerned with animal welfare – it wants to reintroduce fox hunting in Britain – but they’ve run a campaign painting Jews as cruel and willing to disregard the “ethical treatment of animals”.

In the Netherlands, the Animal Rights Party, which has five seats in parliament and has long called for bans on kosher slaughter, has vowed to introduce legislation banning kosher and Islamic slaughter again this year. The issue seems to be largely symbolic: only one shochet works in the entire country, but his slaughtering methods are being described as unethical and “cruel” in public debates.

As more politicians and activists claim that kosher slaughter is “barbaric”, millions of people across Europe are learning to equate Jewish religious practice with spurious charges of animal cruelty. “It’s not about animal welfare; it’s a population control issue,” says Shimon Cohen of Shechita UK, as he prepares to help challenge yet more proposed bans on shechita in Europe. Increasingly, calls to ban shechita seem to be a coded way of saying that Jews and other minorities are not welcome in Europe.

Here are three actions we can all take to help safeguard kosher slaughter in Europe and beyond.

On January 1, 2019, a ban on kosher slaughter went into effect in parts of Belgium, primarily in northern Flemish-speaking areas, after local government bodies passed legislation mandating animals must be stunned before being killed. A similar law is due to take effect in the remainder of Belgium in September 2019. Belgium is home to a flourishing Jewish community, but local residents fear this could whip up anti-Jewish feeling and harm Jewish life in the area.

“To have the government interfere in this way is damaging to the reputation of the Jewish people as a community,” explains Rabbi Menachem Margolin, a Belgian Jew who heads the European Jewish Association. “It implies that we as a group are irresponsible with the welfare of animals and need government supervision which is, of course, a very negative view of us.”

Attempts to ban kosher slaughter in other countries continue to gain momentum. In the Netherlands, both Jewish and Muslim groups signed an agreement with the Government regulating religious slaughter. One provision is that Jews in the Netherlands only slaughter enough kosher animals for local consumption. (The entire country employs only one shochet, who works for one afternoon a week.) Still, the Dutch animal welfare party submitted draft legislation in March 2018 to ban all slaughter done without stunning.

Local Jews are fighting back. In Belgium, a group is challenging the current ban on shechita in court. But as kosher slaughter is demonized ever more, changing the public’s perception of kosher slaughter might prove difficult.

Dancing with the Torah
The Joy of Fasting
The 21st President of the United States: Failure or Inspiration?
Hiding Their Jewishness
Comments