When Books Are Dangerous: Book Banning, Cancel Culture and the Maharal of Prague 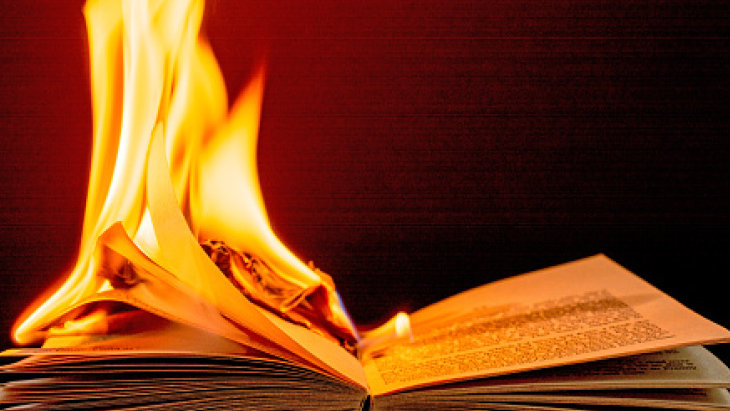 Cancel culture and the silencing of unpopular views often feels like a distinctly modern phenomenon. As 16th century Europe shows, there’s nothing new under the sun.

No, the book that prompted this reaction was not Adolph Hitler’s Mein Kampf, but British writer Kate Clanchy’s memoir of her 30-year teaching career, Some Kids I Taught and What They Taught Me. After initial rave reviews, Clanchy came under fire for describing minority children as having “chocolate-colored skin” and “almond-shaped eyes.” Though Clanchy’s students spoke up in her defense, writing of her “unequivocal care and support for us,” her publisher’s parent company quickly announced that it would stop distributing all of Clanchy’s books.

Cancel culture and the silencing of unpopular views often feels like a distinctly modern phenomenon. But as King Solomon so presciently wrote, “There is nothing new under the sun.” In fact, our own highly polarized society is placid and peaceful in comparison to the cultural climate of 16th century Europe, when the Protestant Reformation tore apart the religious and political order of Catholic Europe. Religious debates fueled massacres, beheadings and dismemberments of both Protestants and Catholics, with the Jews too often caught in between.

Amidst all the gore, ecclesiastical authorities in Rome and throughout the Catholic world concluded: books are dangerous.

Amidst all the gore, ecclesiastical authorities in Rome and throughout the Catholic world concluded: books are dangerous. The advent of printing and moveable type in the 15th century unleashed a new and dangerous threat to the Catholic Church. Once rare, books containing inflammatory and heretical ideas could now be mass-produced and disseminated widely. And so, at the Council of Trent (1545-1563), the Church developed a systematic approach to banning books that culminated in the Index Librorum Prohibitorum, the “List of Prohibited Books." In 1571, The Sacred Congregation of the Index was founded, holding meetings several times each year to determine which books would be branded heretical or immoral and subsequently banned – in other words, cancelled.

In the maelstrom of 16th century Europe, the Kingdom of Bohemia – the westernmost region of today’s Czech Republic – was a particularly complex tinderbox, apt to erupt in sectarian war at any given moment. Governed by Catholic Habsburg kings, their subjects were largely Protestant, a dynamic that ultimately led to the Defenestration of Prague, in which Bohemian Protestant rebels shoved Catholic regents out of an upstairs window of Prague Castle in 1618.

Unsurprisingly, this created a highly volatile situation for the Jews of Bohemia, and particularly those living in Prague. Expelled from the city in both 1542 and 1561, the Jewish community returned each time to prosper even more. Jewish religious and cultural life flowered in late 16th century Prague, a period that is often referred to as the “golden era of Prague.”

Rabbi Shlomo Ephraim of Luntschitz, Chief Rabbi of Prague from 1604 – 1619, described the Prague of that era as “A great city before God, full of sages, writers and wealthy men who are famous for their learning, religious observance and fear of God. For a long time there has not been seen such a saintly gathering.”

Among the many great Rabbinic personalities of Prague, the illustrious Rabbi Judah Loew ben Bezalel, known as the Maharal of Prague, stands apart. In both historical legend and popular culture, the Maharal is known as the creator of the Golem of Prague, a clay creature brought to life to defend the Jews of Prague from blood libels and other antisemitic attacks. But the Maharal’s greatest contribution was through the power of his pen, with which he brilliantly explored the foundational principles of Judaism and articulated a powerful response to the events of his time.

The Maharal developed a powerful – and incredibly modern – defense of free speech.

Chief among his challenges was the censorship of Jewish books by the Jesuit Order, granted this power by the Bohemian kings because of their knowledge of Hebrew. Possessing nothing more than the power of his arguments, the Maharal developed a powerful – and incredibly modern – defense of free speech:

It is wrong to disqualify any matter that is opposed to one’s view when expressed for the sake of enquiry and knowledge… even if such words run counter to the belief and religion of the one who is in power… For if this were to be done, there could be no investigation of religion. The following ought, on the contrary, to be declared: ‘Say whatever you wish and all that you desire to express, and do not assert: If only it were possible for me to speak, I could say more.’ For if he seals the other’s mouth and prevents him from speaking, this only betrays the weakness of the religion in question. (Be’er HaGolah, the 7th Well, 151-2)

Rabbi Loew convincingly argues that suppression of speech is a sign of weakness, not of strength. A true man of valor who desires to show his fighting prowess will only be interested in fighting an opponent who can exert his full strength. This way, if he succeeds in vanquishing him, it will be evident to everyone that he is the true champion. “But what prowess does he show when his opponent is not allowed… to put up a fight against him?”

Suppressing the publication of books to prevent the expression of ideas is the tactic of weaklings who lack confidence in their own beliefs.

Suppressing the publication of books to prevent the expression of ideas is the tactic of weaklings who lack confidence in their own beliefs. “It is wrong to reject the opinion of a dissenter, but it is appropriate to bring him closer, and to take note of his opinion… for in this way a man approaches the true content of things and reaches the absolute truth.”

The Maharal argues that even works by pagan philosophers “insidiously and falsely arguing that the universe was not created” should not be censored, for by grappling with their arguments, religious believers will strengthen and clarify their own faith.

Though he almost certainly never read the writings of the Maharal, John Stuart Mill would later make the same argument, more than 250 years later, in his classic essay On Liberty:

The peculiar evil of silencing the expression of an opinion is, that it is robbing… those who dissent from the opinion, still more than those who hold it. If the opinion is right, they are deprived of the opportunity of exchanging error for truth: if wrong, they lose, what is almost as great a benefit, the clearer perception and livelier impression of truth, produced by its collision with error.

These arguments on behalf of free speech are so advanced, so out of character with the bloody religious warfare of the time, it begs the question: how did the Maharal reach these conclusions? The answer, I believe, lies in the historical experience of the Jewish people.

Vasily Grossman, the great Russian Jewish novelist who lived through the terror of Stalin, wrote in Life and Fate that “Antisemitism is also an expression of a lack of talent, an inability to win a contest on equal terms – in science, in commerce, in craftmanship or in painting. States look to the imaginary intrigues of World Jewry for explanations of their own failure.”

The tactics of censors are drawn from the playbook of antisemites, whose insecurity and mediocrity compels them to silence their opponents.

For two thousand years, the Jewish people has dealt with more than its fair share of insecure bullies who were ill equipped to compete on an even playing field. Instead of improving their own lot, they papered over their own mediocrity by oppressing the Jews.

It’s no surprise that the Maharal saw through the censors of his time. Though book censors invariably express righteous indignation to justify their actions, their tactics are drawn directly from the playbook of antisemites, whose insecurity and mediocrity compels them to silence their opponents.

The Twitter mob that came for Kate Clanchy should take notice; the road from cancelling authors to antisemitism is a short one.

The Stockdale Paradox
Korach 5782: Visit to Lift the Spirit
That Time The Ivy League Found A Way To Limit Jewish Enrollment
Would You Rather Be Right or Happy?
Comments
MOST POPULAR IN History
Our privacy policy