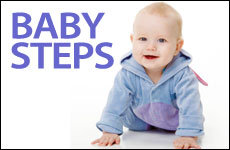 My youngest child, Gedalyah, is about to start crawling. But he doesn’t know it yet.

My youngest child, Gedalyah, is about to start crawling. But he doesn’t know it yet. He’s at this stage where we put him down on the floor near his toys, and he lies down and sits up and lies down and sits up, and all of a sudden he’s nowhere near them. Sometimes, we find him in a different room entirely, and he’s very upset, because he has no idea how he got there. He doesn’t realize that he’s traveling, and we’re not about to tell him, because, as parents, we’re torn between wanting to see our kids develop normally and not wanting to have to baby proof the house again.

Most babies’ main goal is to fit the entire world into their mouths.

This is the difference between first-time parents and experienced parents. First-time parents think that the entire house, including the attic and the garage, needs to be baby proofed months before their child is born, as if it’s going to come from the hospital, stand up, and run into the coffee table.

True story: A few years ago, a car stopped in front of our house, and a young couple got out and asked if they could use our garden hose. So we gave them the hose, and the husband opened the back door of the car, picked up a pacifier off the floor of the car, and held it out so his wife could wash it. Then they popped the pacifier into their child’s mouth, thanked us, and drove off.

That’s the real fear – choking. You know how, when you lose a contact lens, you get down on your hands and knees and crawl around until you find it? Well, babies are on their hands and knees all the time. Imagine what they’re seeing down there.

And whatever they do see, they put in their mouths. Most babies’ main goal is to fit the entire world into their mouths. That’s why they have such big cheeks.

So pretty soon, Gedalyah is going to figure out that he can crawl, and we’re going to have to spend a large part of our days fishing around in his mouth and pulling out soggy things and trying to figure out what they are.

It’s part of being a parent. You’re sitting there, doing whatever it is you need to get done, when it suddenly occurs to you that you haven’t seen or heard from the baby in about five minutes. So rather than enjoying the peace and quiet, you get up and look around. You even start calling the baby’s name, like he’s going to respond. Finally, you see his legs sticking out from under the couch. He doesn’t even notice you’re there, because he’s happily doing something that maybe involves a faint crinkling noise. So you grab his leg and gently pull him out, and he looks up at you, with a long piece of hair stuck to his face, and he smiles, because the truth is that he’d really had no idea how he was going to back out of under there, and he hadn’t considered an escape plan before he went in. And in that smile, you notice that he’s definitely chewing on something.

The first time this happens, it doesn’t register. You start to turn back to what you were doing, but then it occurs to you: “I haven’t actually given him any food, yet he’s chewing on something.” So you dive down and hook your finger into his mouth, and the baby turns his head away to fight you, and he starts whimpering, but finally you get it, and you triumphantly pull your finger out of his mouth to find: part of an old cookie.

I always feel so bad when that happens. Sometimes I find myself apologizing to the baby: “Oh, I’m sorry. Here, you can have it back.” And then I put it back in his mouth. And he looks at me, like, “I don’t want it now! Who knows where your fingers have been!”

So we’re going to have to get on top of the other kids about cleaning up as well. They’re still very excited about the baby; they think that we got them a new toy. They’re always making him laugh, and lugging him around, and once in a while I come downstairs and yell, “Hey! Who drew on the baby?” But now, having a baby brother is going to mean picking things up, like art projects and lone crayons and Polly Pocket shoes (which are smaller than contact lenses) and those tiny little balls that bounce really high and then immediately get lost. And wait until he discovers the pile of knapsacks near the front door. There’s always food in those.

And let’s not forget band-aids. My kids believe that any booboo, no matter how small, needs a band-aid. It doesn’t matter if it’s not bleeding, or if there’s not even a visible scrape – as soon as they fall, go right upstairs to get a band-aid, and of course they leave their wrappers lying around. And then, a couple of days later, I find a band-aid stuck to the floor. In my kids’ view, a band-aid isn’t a patch to stop blood from getting on your clothes; it’s a sticker you get for falling down.

It’s very important that we clean all this up, because Gedalyah is definitely the curious type. He sits on my lap when I’m working and tries to type. He picks up the phone on a regular basis, starts pushing buttons, and then, when he hears someone say, “Hello?” he puts the phone in his mouth. And when I wash him off in the kitchen sink between meals (I actually sometimes consider running him through the dishwasher) he takes the opportunity to play with the things that are drying on the drain board. With his dirty hands.

But curiosity is fine; it’s a sign of a healthy baby. Basically, God created tiny babies with no immune systems, and they have only about three years to get their immune systems in top shape before we drop them off to spend a day in a room where, at any given moment, approximately 90 percent of the kids have runny noses. So He made it that babies crawl around and pick up random things with their filthy hands and put them in their mouths. Band-aids, for example, have got to be great for the immune system. Except in my house, where they’re probably the cleanest thing on the floor.