At the Frontlines in Surfside 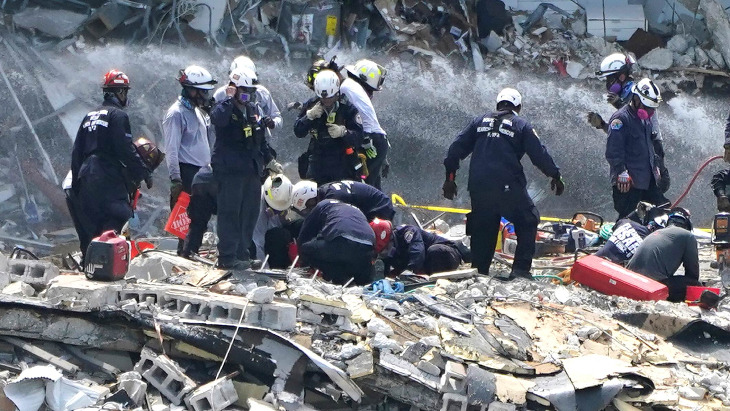 Interviews with volunteers from the Jewish community who are helping victims of the disaster in Florida.

On Thursday, June 24, 2021, tragedy struck Champlain Towers, a 12-story residential building in the Miami suburb of Surfside. Half of the complex suddenly collapsed in the early hours of the morning, burying entire families in the rubble. Days after the disaster, the remains of several people killed in the crush have been recovered and 150 people remain unaccounted for.

Champlain Towers is home to a diverse community that includes many Jews. In the days that followed this catastrophe, Jews and others around the world have come together to help search for victims and to comfort the families desperately waiting for word of their loved ones.

Searching Through the Rubble

Leon Roy Hausmann, a volunteer with the Mexican Jewish rescue organization Cadena, is on the scene in Surfside and spoke with Aish.com about the sense of solidarity he feels with the community and the many victims of the calamity. 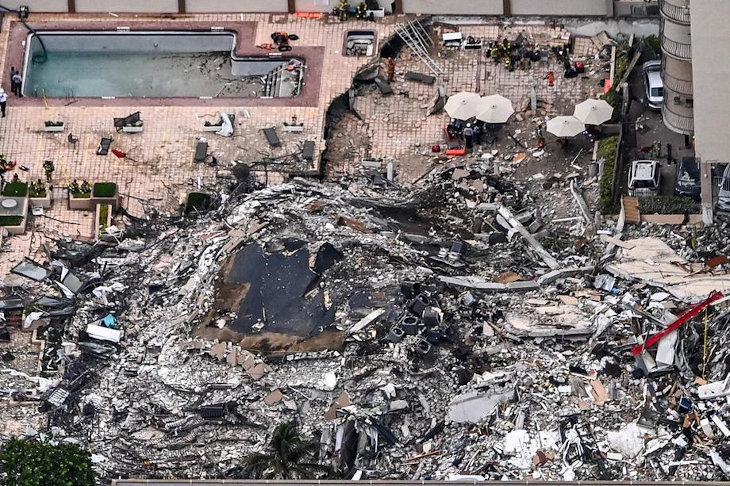 Cadena volunteers help people “regardless of nationality, regardless of religion; we don’t discriminate,” he explains. After working around the world to help search for and rescue victims of over 1,000 natural disasters, helping search for residents of Champlain Towers feels close to home. “It just feels more immediate when it’s our people who are victimized by this event.”

When Cadena volunteers heard about the Chaplain Towers collapse, they sprang into action, dispatching seven Jewish search and rescue experts to Miami, and mobilizing local Cadena volunteers in the Miami area. “This is the highest technology in the market,” Hausmann notes of his team’s equipment, which includes sonar devices that can detect sounds underneath dozens of feet of rubble, search dogs trained to detect human scent, and x-ray machinery.

“We’re working with the Fire Department of Miami-Dade County," Hausmann notes, describing their work as round the clock and nonstop. Cadena volunteers have also dispatched psychologists and therapists who are working with family members who are still awaiting news.

Thousands of local residents have been volunteering to bring food and clothes and other items to the family members who are waiting and also to those families who made it out of Chaplain Towers alive and are currently homeless. “Thousands of volunteers have been bringing food and clothes and anything the families need. It has been very touching to see.”

One of Hausmann’s most moving moments during the past few days came on Shabbat, the day after the collapse. About 17 Cadena volunteers were at the site late on Friday night, providing support to the local fire department rescuers. “We made Kiddush for the whole team,” Hausmann recalls, “and also for all the Jewish people who are still trapped underneath the rubble.” 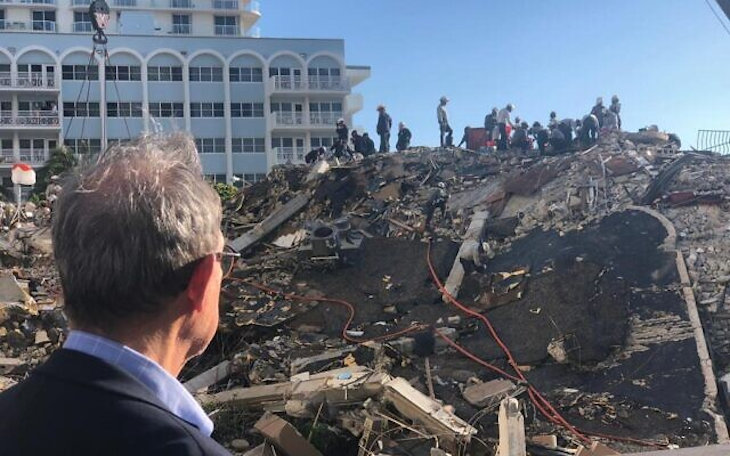 Diaspora Affairs Minister Nachman Shai at the site of a building collapse in Surfside, Florida, just outside Miami, on June 27, 2021

On Sunday, June 27, a group of ten Israeli Home Front Command soldiers arrived in Surfside. They went straight to the site of the building collapse and got to work alongside Cadena volunteers and local Miami-area first responders, searching in the rubble for survivors and also for the remains of victims of the collapse, bringing their search and rescue experience and expertise.

Rabbi Counselling the Bereaved and the Waiting

“The need right now is endless. You think of all these different families that have been erased in the blink of an eye,” explained Rabbi Dr. Fred Klein, one of the key responders in the area.

Rabbi Klein is the Executive Vice President of the Rabbinical Association of Greater Miami, Director of Mishkan Miami, and is board certified in clinical pastoral care. When Champlain Towers collapsed, the Jewish Federation of Greater Miami sent Rabbi Klein to help. He spoke with Aish.com during a busy day, filled with meetings and work coordinating the many elements of response to the disaster. 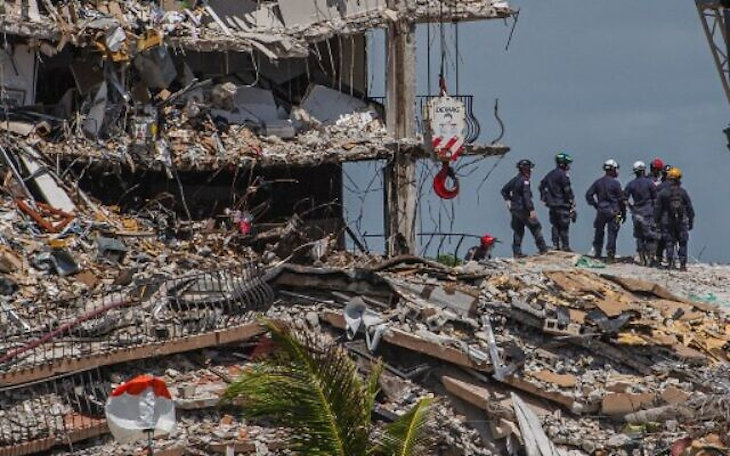 Right now, there are two main areas where Rabbi Klein and other volunteers are focusing their efforts. “One is actually the area where they’re doing search and rescue,” he explains. Throughout Sunday, June 27 – the Jewish fast day of the 17th of Tammuz, when Jews were fasting despite the extreme heat in Surfside – Rabbi Klein worked to take groups of family members to visit the site. “It’s extremely traumatic for them.”

A second area where Rabbi Klein is working is a local hotel where hundreds of family members of people who are still missing are gathered. “They came from around the country. They’re waiting for news and I think it’s a very difficult place to be psychologically.” He notes that many family members are praying “for a miracle” that their loved ones are found alive. “It’s hard to know what to do, or how to feel, or how to plan,” without knowing whether their loved ones are still alive. The hotel is offering kosher meals, all prepared by local volunteers. “So much good will has been flowing in from the Jewish community since the tragedy," Rabbi Klein explains, helping both Jewish and non-Jewish victims alike.

He notes that donations have poured in from throughout the area and that some local synagogues have transformed themselves into distribution centers for donated goods. “It’s not just the families who are waiting for news of a loved one,” he notes: “There are also families who lived in Champlain Towers who escaped. They are in need too. They’re homeless right now and are going to have to rebuild their lives.”

“I’m an Orthodox rabbi,” he notes, “but you see rabbis from all different walks of life – men and women – they’re on the ground right now. They’re trying to help diverse groups of Jews.”

Many of the volunteers supporting the first responders in Surfside and aiding families of missing people are members of Hatzalah of South Florida, a Jewish group that improves health and medical outcomes by “augmenting existing emergency medical services in South Florida with community-based state-certified EMT (Emergency Medical Technician) volunteer responders.”

Joseph Dahan is one of the Hatzalah volunteers working in Surfside. “We’re broken down into several different teams,” he explained to Aish.com – with each team focusing on a different area of need.

At the site of the building collapse itself, “we’re providing the triage and medical support for the search and rescue teams,” he notes. When rescuers become injured or dehydrated on the job, Hatzalah volunteers help tend to the first responders.

Hatzalah also operates units of volunteers at the hotel where hundreds of family members are waiting for news. They employ psychotherapists and also work with other organizations to help counsel people. Hatzalah provides support medically and emotionally during these trying times.

Running a Storehouse of Donated Goods

Rabbi Gidon Moskovitz currently lives in Houston, but he and his family are soon planning to move to Bal Harbor – a neighboring suburb near Surfside – when he becomes the rabbi of Young Israel of Bal Harbor later this summer. As soon as Rabbi Moskovitz heard about Champlain Towers disaster, he knew he had to be with his Florida congregants, and flew to the area to help.

What he found was a huge outpouring of chesed (acts of kindness and help). Local Jews were collecting food, toiletries and other items to donate to families who lost their homes and possessions in the collapse. Soon, the garage of Young Israel of Bal Harbor was filled with donated items to distribute. Many of his congregants have friends and relatives who are still missing, and they are doing all they can to help.

“We knew they had nothing.”

“As soon as we heard about things Thursday morning at the crack of dawn, we checked on our (congregational) families,” recalls Mike Baranek, the Director of Congregational Engagement of Temple Beth Shalom in Miami Beach, in an Aish.com interview. He soon found that two of his synagogue’s members lived in Champlain Towers. “Thank God, both families were alive,” he notes. “One family walked out (of the building) in their pajamas” – unable to return to the destroyed building, they cannot access any of their family possessions.

Baranek notes that local Jewish families immediately opened their homes, giving displaced residents places to stay. “It’s been an amazing response from the city and from the Jewish community.” His congregants have been working to gather donations and to help in any way they can. “We got to the point where announcements were made that no more physical supplies are needed.”

The day after the collapse, Temple Beth Shalom delivered Shabbat dinner to their congregants who’d lost their homes. In addition to food, the synagogue also delivered kippahs, tallitot (Jewish prayer shawls), siddurs (Jewish prayer books), wine and candles for Shabbat. “We knew they had nothing,” Baranek explains.

What we can do

With the search and rescue operation still underway, there are many ways that we around the world can also step up to help. “At this moment the most important thing is to pray for the lives of the people who perished and who may still be alive,” notes Cadena volunteer Leon Roy Hausmann. Rabbi Moskovitz has been emphasizing the “power of what prayer can do.” He wants people to understand that prayer is just as important as other types of actions.

During times of tragedy, it’s a Jewish custom to recite Psalms. Consider spending some time reciting one or more Psalms each day. Here is a link to English translations of these powerful, timeless Jewish prayers. https://tehillim-online.com/tehillim-translated-into-english

We can also donate funds to help sustain the volunteers working in Surfside and the families who are in dire need.

The Greater Miami Jewish Federation has set up a fund to help victims of the Champlain Towers collapse. https://jewishmiami.org/gift/surfsidebuildingcollapse/?fbclid=IwAR318kF3kFQzOJaVXD3mVG0Zedgd0-f1SGr-wWGCZGi5B0zUhMOKafbr4Rk

The Shul of Bal Harbour, which is near to Champlain Towers and has served as a center for receiving and sorting donations, has set up the 8777 Collins Avenue Relief Fund. This fund will “be dispersed as needed directly to the victims and families.” https://www.theshul.org/8777

Donations to Hatzalah of South Florida can be made at this site: https://www.hatzalahsouthflorida.org/donate

The Most Important Thing You Need to Know about Rosh Hashanah