As the Flame Flickers 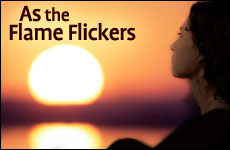 The challenge of observing the anniversary of the death of someone never born.

When the anniversary of my parents' deaths comes around, I light a memorial candle according to Jewish tradition. Within its glass container, the golden light glows and swirls, a reminder of someone precious who was once a part of my life, and still is, though no longer in this world. As the flame flickers, the soul is comforted by its light and warmth.

But how to observe the anniversary of the death of someone never born, who never fully entered this world? There is no ritual to mark his passing, yet if he had lived, my baby would have been a part of our family no less than his older siblings.

My husband and I had always dreamed of a big family. We were blessed with four children for whom we were deeply grateful. Each one so special, so unique. Despite having the same parents and environment, their individuality continually amazed us. And so, we longed for more.

Once, like many women, I had taken my fertility for granted. Our first two sons were conceived and born without any difficulty. Our third child took a bit longer and then he was almost three by the time our only daughter finally arrived. By then I was older, an "elderly multipara" in medical terminology. The years went by uneventfully. Each month I tried not to hope, because I feared I’d only face disappointment.

Still, I did all the necessary things – visiting one doctor after another, spending endless hours in their waiting rooms, being poked and checked and pricked for monthly hormone-level tests. Obediently, I swallowed the pills I was given, underwent the ultrasounds, endured uncomfortable treatments. The doctors could not understand why I was willing to suffer all this.

I discovered a woman doctor who understood my yearning for one more baby.

“You’re over 40, and you already have four children,” they said. “Why do you want another baby so badly?” The doctors, who see desperate childless women all day, could not relate to someone like me, someone with secondary infertility. Then, I discovered a woman doctor who understood my yearning for one more baby. In fact, she had known the pain of childlessness herself and had finally adopted a little girl. She admitted that my age made the situation problematic and that my chances of completing a successful pregnancy were slim.

Her words were sweet and encouraging. She prescribed a new type of medicine. Dutifully I swallowed my pills, hoped, prayed and cautiously waited.

When I realized I was expecting, it was early spring, an auspicious time for starting a brand-new life. Like sap rising in the trees, tremulous hope began to stir.

It was far too early for maternity clothes, too soon to be choosing a name, but we both had a feeling that this would be a boy. Although I had once longed for another girl, a little sister for my only daughter, at this point I didn’t care about the gender. “As long as it's healthy.” We repeated the words of all expectant parents and meant them.

Walking along the street that shiny April morning, I had a sudden vision of this tiny new being who had just started to grow within me. I saw a smiling baby who resembled a photograph of my husband as an infant. However, there was also something deeply disturbing about the image. The baby was in a garden but instead of sitting on the grass, he hovered a few inches above it. Though very close to being in this world, he did not actually touch it.

And, sadly, he never did. Soon afterwards, I began spotting. I crawled into bed at this ominous sign, gripped with fear. Maybe if I just kept very, very still… I tried to reassure myself that all might still be well, but it was not to be. Our precious little soul slipped away, returning to his Source.

The doctor in the emergency room confirmed that I had "lost" the baby. I remember thinking it a strange expression – as if I had simply misplaced him somewhere.

I had never even held him in my arms, yet our potential child, who would have been welcomed with such joy and love, was gone. We could not publically announce our loss and be comforted, but a loss it was nonetheless. No one had even known of his existence except my husband and me. We had to mourn alone, in silence.

My other children needed me and I was grateful for that. It was spring time and they clamored to go on a family outing. Thinking a change of surroundings might help diminish some of our grief, we consented. Sitting in the park, we breathed the warm spice fragrance of the tall pine trees. Bright blossoms dotted the lush green grass. But it seemed to me that almost every woman there was either pregnant or holding a tiny baby over her shoulder. My loss was inescapable. Even now, after all this time, when I look at the photographs we took that day, I recall my sorrow.

One year later we found ourselves at a beautiful lake for another springtime outing. The passage of time had helped me heal. Tired from the journey and dazzled by the lovely scenery, I had forgotten this was the anniversary of the day our unborn child died. But suddenly he came to my mind, unbidden, as though to remind me of the fact. Reaching into the clear cold water of the blue lake, I touched a small, smooth stone. My baby had been even tinier than that when he died. I closed my fingers around it, glad for something tangible to hold.

In the secret stronghold of my heart his tiny flame forever flickers.

A stone. I thought of my parents and of the tradition of placing a stone on their graves whenever I visit. I pictured them in heaven, playing with their baby grandson, loving him as they had loved their other grandchildren in this world. I took comfort in that image and in the hope that one day, when Moshiach comes, we will find each other. My son will call me ‘Mommy’ and I will hold him at last.

I wanted to light a memorial candle for our "little soul" feeling he would be comforted by its special light. But my husband asked our rabbi and was told, regretfully, that this is not done. A stillborn baby could have a memorial candle but it is not appropriate for a miscarriage.

What did I learn from my little soul's wisp of a life which brushed my own like a butterfly’s wing? Perhaps to better appreciate the children with whom we have been blessed. To have more patience and compassion. To better share the sorrow of others. A reminder that all of life is precious, no matter how fleeting or intangible it may be. Although I cannot light a memorial candle for my baby, in the secret stronghold of my heart his tiny flame forever flickers.

A version of this article was published in Mishpacha Magazine.

Staying Young: The Story of a Life

Living Here
It Takes A Lot Of Faith To Be An Atheist
How Instagram Brought Back This Nostalgic Soup
What Makes Eli Run?
Comments
MOST POPULAR IN Family
Our privacy policy