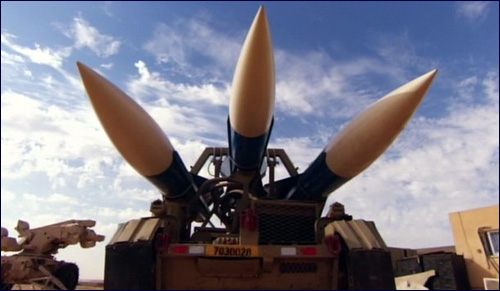 Like the destruction of the Temple, many people don’t believe the warnings and don’t expect Iran will ever attack Israel.

Despite suffering the catastrophic calamities and tragedies of the last 2,000 years, we nevertheless remain an eternally optimistic people always wanting to believe that somehow regardless of the most recent enemy declaring his intent of wiping our people and our homeland off the map, everything is going to be alright. Optimism has served our people well, giving us the strength, courage and faith to endure in the face of relentless attempts to annihilate and exterminate us. And yet, unbridled optimism is extremely dangerous when it breeds apathy, complacency and indifference.

Despite the countless warnings and portents of the impending disaster, the generation that experienced the destruction of the Temple refused to see it coming. The first word of the first kinnah (elegy) we recite on Tisha B’Av morning is shavas, which means to cease. Our Rabbis emphasized that shavas doesn’t just mean everything stopped, it means it ceased suddenly or unexpectedly.

Although the people were told that the Churban (destruction of the Temple) would occur, they did not really believe the warnings and did not expect that it would ever happen. But when the people arose in the morning, lo and behold, contrary to everyone’s expectations, the Temple, the Beis Ha’Mikdash, was gone, Jerusalem was in ruin and the people were in captivity. The realization that the Churban had occurred struck suddenly. It had the emotional and psychological impact of a sudden disaster.

For those who trust neither Iran nor the effectiveness of this deal to curb their nuclear ambition, the warnings and portents of potential devastation for our people are once again here. It is not surprising that Prime Minister Netanyahu has declared the deal a historic mistake. Less expected has been the reaction of political leaders on the left who are consistently dovish. Opposition leader Isaac Herzog denounced the Iran deal as a “bad agreement that endangers our security interests” and pledged to lobby Congress to vote against it. Fellow opposition leader, Yair Lapid, condemned the Iran deal, declaring it a “bad day for the Jews.”

Normally bi-partisan pro-Israel groups and consistently apolitical Jewish organizations have uncharacteristically come forward, publicly condemning the deal and pledging to mobilize their constituents to fight it.

Too many people do not believe the warnings and do not expect that a nuclear Iran attacking Israel will ever happen.

And yet, like at the time of the destruction of the Temple, too many people do not believe the warnings and do not expect that a nuclear Iran attacking Israel will ever happen. I was heartened by the ten thousand people in attendance at the rally in Times Square this week and was uplifted to be part of a community of people raising our voices in an effort to encourage elected officials to oppose this deal. This is not a Jewish or Israel issue alone, however it should hit close to home for the Jewish community, given the countless calls from Iran for genocide against our people. It is therefore incredibly disheartening to think that though New York is home to over two million Jews, only ten thousand took time and made the effort to participate. Assuming the accuracy of a recent poll that states that the 49% of American Jews are in favor of the deal, the questions remains, are the other million opposed enough to make a phone call, send an email or attend a rally?

A recent article by William Kristol, “Fait Non-Accompli” asks, “Is it really possible that over a dozen Senate Democrats and almost 50 House Democrats will defect from the president and vote both to disapprove and then to override his veto? Yes. It’s possible, if not yet likely. And the possibility will grow if opponents energetically press their case.”

Influencing the outcome of a deal with a sworn enemy of Israel is possible, but it rests on us energetically pressing our case. Are we up to the challenge? Are we prepared to mix a healthy dose of realism into our eternal optimism and to heed the warnings and predictions of our day? Will we be troubled enough to mobilize, lobby, advocate and do all we can to effectively persuade our representatives? If you choose to be indifferent, apathetic or hopelessly fatalistic, look back at 2,000 years of Jewish suffering and know that for those who refuse to accept the warnings, in an instant – suddenly, shavas – the unimaginable becomes imaginable and the unthinkable becomes thinkable.

Don’t place your faith in princes and diplomats, said King David. As believing Jews, we recognize that ultimately it is the Master of the Universe who is the arbiter of our destiny and who alone will determine if Iran is successful in their stated goals. Prayer, in Judaism, takes two forms, with words and with deeds.

Trust in God is displayed by coupling our heartfelt prayers with energized action.

When we stood opposite the sea with the Egyptians in pursuit and no place to go, we instinctively turned to prayer, a laudable reaction, one would think. And yet God is critical and declares, “Why do you cry out to Me? Speak to the Children of Israel and let them journey forth!” (Ex. 14:15) God sought to teach a developing nation that to truly be a faith community, you must in addition to prayer take initiative and action. A nation must never be passive, complacent and or act as spectators to their own destiny. Trust in God is not displayed by praying and doing nothing more. It is exhibited by coupling our heartfelt prayers with enthusiastic and energized action. It is recognizing that He measures the sincerity of that which we ask for by our willingness and eagerness to take initiative and do our part to achieve it.

As we lobby our elected officials, we must know that God Almighty is in the audience collecting our efforts as prayers to Him.

Towards that end, we are working on an initiative called StopIran535, coordinated rallies outside the home offices of all 535 members of Congress, Senators and Representatives, at 5:35pm on August 29, shortly before they vote on the deal. Some rallies will thank those that have pledged to oppose the deal and others will seek to encourage and persuade those that have pledged to support the deal to change their minds. Our goal is for every elected official and even more importantly for God Almighty, who as always is listening closely, to know that this monumental issue matters to us and that we are doing everything we can to impact it. To learn more about it or to get involved, please see the website http://www.stopiran535.com

Stepping up and answering the call to protect our people at this time may just have Messianic implications. Though far be it from me to fully understand or apply this statement in the Midrash Yalkut Shimoni (Yeshayahu 499), compiled in the 13th century, it is hard to ignore it:

R’ Yitzchak states, in the year that the Messiah will be revealed, the leaders of the nations of the world will provoke one another. The king of Persia (Iran) will provoke an Arabian king and the Arabian king will go to Aram to seek counsel from them. The leader of Persia (Iran) will seek to destroy the entire world and all the nations of the world will frighten and scatter and fall on their faces. The Jewish people too will frighten and says where can we turn, where can we go. God will say, My children, don’t fear. All that I have done, I have done for you. Why are you afraid? Now is the time of your redemption.

May we indeed rise to be the catalysts of redemption and merit to usher in the Messiah, speedily in our days.

Command of the Sea
Why My Iranian Mother Didn’t Want Me to Become a Religious Fanatic
The Jewish History of Prague
Why the Sexual Revolution was Bad for Women
Comments
MOST POPULAR IN Israel
Our privacy policy
Aish.com Is Looking for Great Writers