The Jewish Ethicist: The Madoff Affair 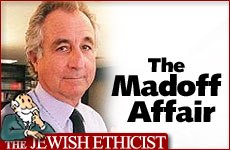 Trustworthiness is a function of accountability.

Q. Can individuals and institutions be faulted for investing with a seemingly upright and reliable person?

A. The whole world, and especially the Jewish world, is reeling over the revelations that New York financier Bernard Madoff, a prominent member of the US Jewish community has admitted perpetrating what is shaping up as the grandest fraud in human history -- a Ponzi scheme that drew in tens of billions of dollars.

There are always careless and vulnerable individuals who fall prey to smooth-talking confidence men, but in this case the victims include many prominent individuals and institutions that are considered astute and sophisticated. One passage from the Talmud provides interesting insight as to how this occurred, and how it should have been avoided:

Rav Yehuda said in the name of Rav: Anyone who has money and lends it without witnesses, transgresses "Don't put a stumbling block before the blind". And Reish Lakish said, he brings a curse on himself, as it is written (Psalms 31) "Silence the lips of falsehood who slander the righteous".

Putting a stumbling block before the blind is the Jewish sages' way of describing tempting someone into wrongdoing. Even a basically honest person may be tempted to misrepresent the terms of a loan when there is no documentation, and while you think you are doing him a favor by not insisting on proof, in fact you are doing him a disservice by creating this temptation.

Reish Lakish points out an additional problem: If the borrower does deny, the lender suffers a blow not only to his purse but also to his reputation. As it becomes his word against that of the borrower, some observers are certain to question his integrity.

Perhaps we would think that this applies only to an average person, but a person of impeccable reputation could be trusted even without accountability. To refute this possibility, the Talmud continues with the following story:

The students told Rav Ashi: [The great sage] Ravina fulfills all the directives of the rabbis. [Rav Ashi] sent [Ravina] a message late Sabbath eve: "Send me ten zuz, for I have just encountered an opportunity on a small field". He sent back, "Bring witnesses and let us write a deed." [Rav Ashi] sent back, "Even for me?" He sent back, "Especially you, for you are preoccupied with Torah learning and likely to forget, and I would bring a curse on myself."

We see from this clever test that even Rav Ashi, one of the greatest sages in our history, should not be considered above suspicion when it comes to appropriate accountability. Furthermore, Ravina does not say, "Of course I don't suspect you, but I have to adopt an equitable policy". He insists that in fact no one is immune from requiring the discipline of documentation.

The fraudulent investment service that was just uncovered was audited by a tiny accounting firm with a single active accountant, making adequate overseeing a total impossibility. Most financial firms of only a fraction its size engage large, reputable and independent firms with huge reserves of staff and experience. According to today's standards, this would be equivalent to lacking witnesses and a deed – there is a lack of adequate accountability.

The Talmud continues with a seemingly unrelated idea. It says that someone who lends money without witnesses has only himself to blame, and then includes in the same category "One who buys a master for himself." One explanation given in the Talmud is someone who has a confederate in fraud. Such a person believes that he can trust his confederate to steal with him without stealing from him. Our tradition teaches us that this is unrealistic. A crook is a crook.

This is also relevant to the recent situation. While many people relied on the investment manager's reputation and considered him above suspicion, others were convinced that he was engaged in misconduct but didn't mind because they imagined that he was doing so on their behalf. As they learned, this is not only unethical but also naive.

Our sages teach that controls and accountability are needed to protect both sides in a transaction, from loss, from sin, and from disgrace. Even the greatest individuals can benefit from this discipline to keep them on the straight and narrow path.

The Jewish Ethicist: No Such Thing as a Free Lunch

The Jewish Ethicist - Your Loss, My Gain

The Jewish Ethicist - Anti-Aristocracy
Vayelech 5783: Regret and Repent
Rabbi Sacks: Focus On the Important, Not the Urgent
Put Your Foot Down: Are Human Feet Poorly Designed?
Comments
MOST POPULAR IN Current Issues
Our privacy policy
Aish.com Is Looking for Great Writers