Touching the World of Angels 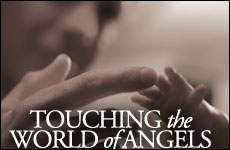 How my daughter's short life changed mine.

What can anyone say when a baby dies in her crib without warning just 76 days after she was born? Jerusalemite Seth Clyman, who with his wife Ellen has eight other children, spent six years writing a book that recalls the tragedy and the chilling week (in 1991) of mourning for their daughter Rena Nechama. The 126-page, self-published volume called Touching the World of Angels: How My Daughter's Short Life Changed Mine, will touch the hearts of readers.

The text is full of flashbacks, memories and recollections and has been endorsed by Rabbi Zev Leff of Moshav Matityahu, who called it "very inspiring," especially since he himself lost a nine-month-old granddaughter. "Through this account, we can glean many lessons and be sensitized to the feelings of others who, God forbid, suffer a similar loss."

Rebbetzin Feige Twerski added that the author "opens his heart and soul in sharing his journey from the pain and darkness of loss to meaning and consolation."
But one needn't be religious or even Jewish to appreciate the message on how to cope with the passing of a beloved baby.

The official rate of sudden infant death syndrome (SIDS) is relatively low in Israel, at 0.4% per 1,000 live births each year. As some 150,000 babies are born here annually, the average number of SIDS deaths is 60. However, since autopsies of newborns who die an unexplained death are almost never performed, the figure is only an estimate. Whatever the real numbers, every SIDS death is a shocking calamity that affects a family forever.

Health Ministry guidelines for reducing the risk of SIDS include putting a baby to sleep on its back rather than its stomach; not smoking near a baby; breast-feeding; not having a baby sleep in its parents' bed; keeping the night temperature in the nursery at 21 to 23C; and dressing a baby in layers of light clothing rather than one heavy layer under heavy bedclothes, which can cause overheating.

"Your baby isn't well.... Please don't ask any questions, just come home as soon as you can."

The 49-year-old author does not recall if he, his wife or the babysitter at whose home Rena Nechama -- then their sixth child -- died had not been attentive enough, but says there is no point in blaming anyone or anything. The Clymans certainly don't smoke. "We wouldn't allow any of our grown children to marry a smoker," he says in an interview. There has also been no other crib death in his immediate family, says Clyman, who was brought to Israel from a small town in New York State when he was 14, and today works as a coordinator of yeshiva and other building projects.

On that horrendous afternoon, Clyman received a call from the babysitter, who said: "Your baby isn't well.... Please don't ask any questions, just come home as soon as you can."

He heard an ambulance in the background that had been called by a doctor in the neighborhood who rushed over when the babysitter alerted him. Inside were Rena Nechama and his wife Ellen, being rushed to Hadassah University Medical Center on Mount Scopus - the same hospital where the baby had been born a little over two months before.

Having reached the emergency room, Seth saw the doctors frantically trying to get a pulse. But finally the doctor in charge said: "Enough. There's nothing left to do."

Married for seven years, the Clymans then had five other children at home.

"Babies don't die," he writes. "They're supposed to grow. It shouldn't happen like this. Children should bury their parents."

The funeral was arranged, and Seth broke down when they had to go through the ritual of asking forgiveness for anything they might have done during her life. There were no eulogies, but when the burial society van was about to leave for the Har Hamenuhot cemetery, an old family friend advised the couple not to witness the burial or visit the grave, according to custom. So they took a last look at the van and went home for the seven-day mourning period.

The burial was on Tu Bishvat, the time when one traditionally plants saplings.

Clyman says that when they returned home, none of the 400 children who lived on the small cul-de-sac was playing outside.

"They had seen the ambulance and knew about our baby's death. They were shaken, and all remained indoors," he recalled later.

When they opened their front door, they found that their neighbors, after consulting a rabbi, had removed the baby's crib and all her clothes and toys. They also came in daily to bring food so the family wouldn't have to worry about meals during shiva. The Clymans "farmed out" all their others kids, except for a son who had chicken pox.

"When you lose your most precious possession, it brings out the real you... " 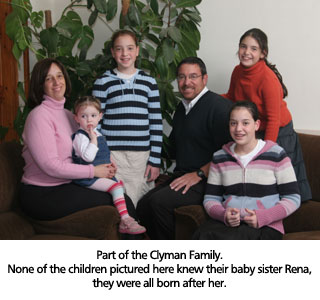 "When you lose your most precious possession, it brings out the real you... All souls come down to this world with a mission. Some missions take a long lifetime to complete, some take a few years, and some take not much time at all. Whatever our mission, once it's completed, there's no longer any need to be here."

Asking a friend what to tell Rena Nechama's siblings, he was told: "Just tell them the truth. 'Your baby sister has left this world and has gone back to the Creator of all souls. She no longer has to be here with us, and you now have a sister in Heaven.'"

"The visits were good, the phone calls were supportive, but in the end we would be facing our tremendous loss alone and together," writes Clyman. "We would be left with the children we still had, and a big, empty space in our lives. It was going to be a rough week, and so would the time after."

Clyman sat down right after the shiva to record his thoughts, and listened to the tapes every few years. When he heard that another couple had lost their baby to crib death, he would speak to them. "People asked if there was anything on the subject to read," he says in a recent interview. "I said there were books with segments about crib death. But I knew of nothing for the Jewish reader just about that. And they were rarely written by fathers. So I decided I would write a book. I wanted it to be short, and I wanted it to be me."

Neither of them consulted a psychologist about their loss, but Seth went to a course on bereavement that made it possible for him to counsel others. Asked why they had never marked a yahrtzeit (anniversary of death) or visited the grave, he explains: "I understand it is a collective grave over to the side, where newborns are buried and there is no marker. I've never had the urge to find out exactly where. She knows where we are, and we know where she is."

Still, Ellen continues to light nine candles before Shabbat for all their children -- including one for the baby they lost.

Unlike other cases, Clyman said the tragedy didn't cause a crisis in his marriage. "We had a houseful of kids. We had another girl two-and-a-half years later. We didn't suffer a crisis of faith; our belief became much stronger. It was a setback, but we've all grown from it."

On the fourth day of the shiva, a man who came over to console him said: "My friend, if you can get up off the floor after seven days and say God loves you, has given you so much, cares for you and always has, then you've sat shiva. God gave you a precious gift. He entrusted you with her, and you watched over her. He chose you to enable her soul to achieve its purpose... You must be special in God's eyes. I want you to know how many people you can strengthen at this time. You're falling into what appears to be a big, black hole, but when you land, you won't be the person you were a week ago. You'll never be the same. If you really sit shiva, you can start to deal with the reality of life in the face of death."

The family had a framed calligraphy drawn with verses in the Psalms that it donated to Hadassah's emergency room, where the baby had been taken. A little sign says it is in memory of the baby. "I go from time to time to make sure it's still there," says Clyman. "I hope it helps someone."

Would he want someone to name their own baby after Rena Nechama?

"I don't think so. Nobody offered. But it's too heavy and powerful a burden to name an infant after one who died. I prefer that good deeds are done in her memory."

What can anyone say when a baby dies in her crib without warning just 76 days after she was born? Perhaps the best answer, if any, is what one shiva visitor to the Clyman house told them: When you visit a family this has happened to, you will go home and appreciate your own children more.

Click here to purchase a copy of Touching the World of Angels.

Walking with My Father

The Music of Opportunity

Why I Send My Kids to Day School
Don’t Believe in Other Gods Versus God is One
Seeing Without Eyes
Why Shouldn’t We Eat Whatever We Want?
Comments
MOST POPULAR IN Family
Our privacy policy
Aish.com Is Looking for Great Writers