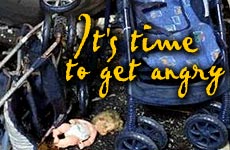 I am angry with myself and with other Jews in the Diaspora for not being angry enough.

I usually love the train ride home from work. It's my chance to come down from the rigors of the job and to anticipate the joy of seeing my family. However, today is different. This evening I cannot relax. I am sitting in my normal seat, listening to the radio and with every word coming out of my headphones I am getting angrier.

Usually at a time like this I can think of some clever, satirical way to make my point about the violence perpetrated on my Israeli cousins. I can write something cutesy that tries to slap people to attention. But today I cannot. Today I am just boiling mad at so many different people.

One of the people my anger is directed at is the guy on the radio. He just described the bombing that targeted so many innocent children as part of the cycle of violence. I am upset because he equated Israel's killing of a terrorist to the blowing up of a busload of civilians who were going home from their evening prayers, as if there was no moral difference.

My face is tuning red as I read the newspaper in my lap. In it, an article talks about the security fence that Israel is building and the lack of what they call significant prisoner releases. The article describes these issues as items in the road map for peace that Prime Minister Sharon is dragging his feet on.

Excuse me but the last time I looked neither the fence nor prisoner releases were part of the road map. I also seethe at the fact that the article doesn't say anything about the Palestinian Prime Minister refusing to disarm the terrorists…. something that IS in the road map. Something that would have enabled 120 innocent souls to be home with their families tonight.

I would love to be in Washington, to get 15 minutes to vent my anger at the U.S. Congress. They are considering the cutting of loan guarantees to Israel because of the security fence being built around the West Bank. I would love to be able to remind them that there is a security fence between the United States and Mexico. That fence is not there to save lives; it's there to keep unemployed Mexicans from sneaking in and finding a job in the U.S. That is a good fence. Israel is building a fence to keep terrorists from coming in and blowing up children. That is a bad fence…go figure.

President George Bush, who is supposedly so resolute against terrorism -- why doesn't he force Mr. Abbas to disarm the terrorists? I have seen him publicly criticize the fence also. Why isn't he on TV complaining that Hamas is using the temporary cease-fire to rearm and strengthen their terror cells? Why can't he see that the reason the Palestinians do not want the fence is because it will limit their ability to blow up children? If the security fence was already built, 20 families might not be sitting shiva today. The President is a much smarter man than I am; it makes me so angry that I can see it and he cannot.

When we go to sleep at night, each one of us must each ask ourselves, "What did I do for Israel today?"

More than anyone else, I am angry with myself and with other Jews in the Diaspora for not being angry enough. We should be listening at what the radical Islamics are saying, how they are calling for a jihad against Jews everywhere. Listen to the fact that they are considering ALL of Israel occupied territory. If that does not get you angry enough, think about the fact that governments around the world as well as many of our academics think that Jewish blood is cheap. Just look at the EU's refusal to cut off aid to Hamas. If your blood is not boiling enough, look at the pictures of the twisted wreckage of the bus, the covered bodies, the dead children, the stains of innocent blood.

Folks, it is time to get really angry and it is time to use that anger. Every time you read a biased report in a paper, call that paper's editors to explain to them how their editorial is slanted.

It is time to call your congressmen or your president, and tell them that they are being inconsistent. Explain to them that Jewish blood is not cheap.

It is time to let your anger stew, to use it to help pro-Israel organizations or charities; channel that anger toward campaigning for pro-Israel candidates, to buying Israeli products and to going to Israel.

It is time for each of us to get more angry than ever before, to dedicate ourselves to find peaceful ways to support our cousins who are on the front lines of this war against all Jews everywhere.

It is the responsibility of every Jew to care for their fellow Jews. Now is the time to get mad and to channel that anger into positive action. We can make a difference.

Torn from the Heart
What Makes Eli Run?
The Tyranny of Materialism
Science Enters the Mysterious Inner World of Consciousness
Comments
MOST POPULAR IN Israel
Our privacy policy