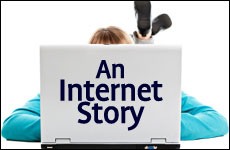 I trusted my children. Then this happened.

No, this is not a rag-to-riches, college-dorm Mark Zuckerberg kind of story. And it isn’t a scary predator or bullying story either. There’s no pornography, no online gambling addiction. It’s not the kind of story that would make the news. It’s not a juicy scoop. But it is a story that affected my family and my children and my parenting. And I think it’s a cautionary tale for others.

I was one of those parents who trusted my children. Even though I had heard the horror stories about unsupervised internet use, I certainly wasn’t concerned about my kids. They were really good. They were really obedient. I made a half-hearted attempt at some parental controls but they blocked so many sites and so much information that I just gave up. Besides, smart kids can get around them, right?

The computer was in an open family area but I wasn’t always in the room. Like I said, I trusted my children. They were open and honest and followed the rules.

What happened was, thank God, not so bad – but it was a sobering wake-up call. I was sitting at the computer one evening when an instant message popped up for my daughter. I certainly didn’t read her “mail” but just glanced at the message. The user name was NYKicks** (expletive deleted). I was a little shocked. My daughter was attending a Jewish religious school. This was not the kind of language I expected. “Oh” she said, laughing. “That’s Marla’s screen name.”

I was a little appalled but I told myself that every family has different standards and comforted myself that my daughter would never use such a vulgar moniker.

But something just didn’t sit right.

A few days later my daughter confessed that she had been misleading us. NYKicks* was actually the user name of a boy she had met online and with whom she was corresponding regularly. They were even making plans to meet! I was horrified. I never would have suspected her of sneaking around behind our backs or of engaging in inappropriate relationships. She was (and is) a bright and responsible student. Even her friends were opposed to her actions (I am grateful to the Jewish day schools for this reverse peer pressure!) but that didn’t stop her. It was too exciting. She was too caught up in it.

It wasn’t really my daughter’s failure; it was mine.

And the internet had made it too easy for her. I was certainly chastened. I was no longer smug. We ended our daughter’s internet access with only a day or two of screams and crying, sturm and drang. I think perhaps she wanted to get caught. But I don’t really know. I did learn that I couldn’t be so trusting or naïve again.

We now pay the price of parental controls and the limitations they impose – although we can still visit Aish.com. We monitor all correspondence much more closely and log off every time we leave the room. It’s certainly not the worth the potential risk to save a few extra seconds of logon time.

I feel a little like a prison warden. But it’s a choice that parents have to make. We are entrusted with the souls of our children. They come to us precious and pure and it is our job to try to keep them that way. It wasn’t really my daughter’s failure; it was mine.

The author, a mother who lives in a strong Jewish community in the United States, is using a pseudonym.

Mandy Patinkin, I Hear Your Cry
Don’t Believe in Other Gods Versus God is One
Seeing Without Eyes
Why Shouldn’t We Eat Whatever We Want?
Comments
MOST POPULAR IN Israel
Our privacy policy
Aish.com Is Looking for Great Writers