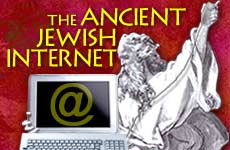 The Jewish people always had a communication network stretching across the globe with a compatible language.

Before satellites, computers, cable, trains, steam ships, the Jewish people had an Internet ― an ancient communication network of exiled people stretching from Yemen and India to Germany and Russia with one compatible computing language ― the Hebrew Torah.

Installed at Sinai and scanned by each generation for viruses, the Torah has remained the immutable software internalized into the hardware of the Jewish leadership in every community ever since. Rabbinic decrees and Y2K-style calendar checks were updated for the changing eras and conditions. Spiritual reboots maintained parts of the Jewish web that were "down" or even destroyed.

The Jews also invented portable technology and the search engine. The entire Torah program was in the head of every capable man. The average 16-year-old could do a mental quick search on anything from military strategy to pre-nuptial agreements, categorize it, individualize it, and apply it to different situations. And in case of a system crash, each man owned a back-up ― he was required to write his own Torah scroll, (the Jewish King had to write two, one of them which he carried with him at all times).

This helps to explain the remarkable survival of the Jewish people against impossible odds.

The Jews invented portable technology ― the entire Torah program was in the head of every capable man.

Richard Worzel, the futurist and author, notes in an interview with Fast Company magazine that "organizations and people succeed based on the quality of their information."

The success of the Jewish people is directly connected to the quality of our information ― a Torah that we received at Sinai, and passed through over one hundred generations of meticulous human transmission. As a tool, the Torah allowed the Jews to make value judgments and categorize the vastness of life's information.

"The phenomenon of information overload is in its infancy," observes Worzel, "If, according to some estimates, the amount of information doubles every 18 months, then by 2015 there will be 1000 bits of data for every fact in existence ... Meaningful facts ― those that have reliable and relevant information ― will become our most valuable resource."

Human beings try imitating God by expanding this world ad infinitum. The Internet, as an MTV executive described it, "is an ocean of spit one inch thick." Navigating through all the information becomes increasingly repulsive. As technology is meant to provide individualized answers to our needs, we place greater faith in Internet portals like AOL and Yahoo "to distinguish between meaningful and irrelevant facts." Arming technology with all our personal information, we hope it will become omniscient enough to cut through the clutter and serve our needs without buckling from the overload.

Moses, in his generation, also suffered from information overload. Tradition teaches that Moses stuttered until he received Torah. He required his brother Aaron to talk for him. Rabbi Akiva Tatz calls this assertion a slander and explains that Moses was on an intellectual and spiritual level that we cannot fathom. His eloquence was supreme ― he was conversing with the Creator of All Existence.

Moses' speech impediment was the result of his inability to find human terms to explain what he'd tapped into. He was tapping into Infinity. Imagine his headspace. He saw the whole picture at once ― exile, shellfish, tax laws, nose rings, Temple architecture, torts, angels, empires, date trees, etc. Until God gave Moses the Torah, he was stuck for words.

Like the Internet, Torah is also compared to a "sea" but its depth is endless.

Torah cuts up the overwhelming reality into clear coherent principals (the Oral Law), into stories readable to a five-year-old and awesome to an eighty-year-old (the Five Books of Moses), and into number and letter codes (Gematria and Kabbalah), both revealing and mystifying.

Like the Internet, Torah is also compared to a "sea" but its depth is endless. Torah gave Moses fluent speech ― the language with which to navigate the Jewish people through the maze of God's mind by giving over to them the parts he could access in digestible bite-size symbols, i.e. the Hebrew letters. He found speech and gave the Jewish people guidelines through which to cut through the clutter of the world in order to arrive at truth.

Unlike math, which moves incrementally from addition to algebra and to calculus, the Oral Torah or Talmud has no starting point and no natural progression. The Torah has to be understood in its totality. The growth process of the learning Torah can be compared to a movie camera focused on a stunning detail that pulls back slowly revealing the intricately-designed detail to be a speck in the backdrop of a colossal light-flooded panorama.

The Talmud writes that "when God made the world he looked into the Torah," or, in other words, He created a world that with a Torah would make sense.

Today's technology is meant to help us cope with reality. As content increases, people seek a system that clarifies and points towards truth. The Jew need not wait for Intel's newest microchip or Microsoft 2001 Messiah version. We have Torah ― the lens that allows us to clarify life's objectives, and move through it without losing focus ― no matter how history may stack up against us.

Azriel Hirsch Friedman was the founder of Conceptual Entertainment Ltd, a trend strategist advising multinational corporations and ad agencies in Russia and its republics. He went on to study at Aish HaTorah in Jerusalem, where he now lives with his wife and children.

Becoming a Jew: All the Perks of Membership

Saving the Ship
Don’t Believe in Other Gods Versus God is One
Seeing Without Eyes
Why Shouldn’t We Eat Whatever We Want?
Comments
MOST POPULAR IN Israel
Our privacy policy
Aish.com Is Looking for Great Writers