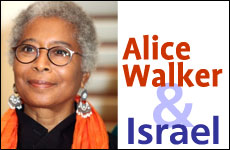 The Pulitzer Prize winner’s fanatical worldview has morphed into Jew-hatred.

I'll never forget the first time I watched the film version of Alice Walker's masterful 1982 novel The Color Purple. Both book and movie brilliantly depict the savagery and violence against blacks in the American South and in South Africa in the 1930s.

The story is about Celie, beaten and impregnated by her step-father; Celie's friend Sophia, unjustly jailed and horribly abused in prison; and Celie's sister Nettie, a missionary in South Africa, ministering to brutalized people denied civil and political rights. It's a depressing novel, but also an important one, stirring readers to fight injustice. For this, Alice Walker was awarded the Pulitzer Prize.

You'd think after writing about these abuses, author Alice Walker would enjoy visiting a country like Israel: a robust democracy in which conflicting views are forced to coexist. After all, Israel has an open and vibrant press. In Israel, the vote is extended to all, regardless of ethnicity or religion. Members of Israel's Arab minority serve at all levels of government, from Parliament to Supreme Court justices. The U.S. State Department describes Israel as a liberal democracy where minority rights are respected, and disputes are settled fairly without prejudice in the nation's courts.

But instead of finding in Israel a common liberal sensibility, Walker recently announced that she won't let The Color Purple be translated furthermore into Hebrew. (A previous Hebrew version came out in 1984.)

Why? Because, according to Walker, life in Israel today is "worse” than the segregation she suffered as a youth in the Jim Crow South, and also "worse" than South African Apartheid.

Perhaps Walker's criticisms say more about her than they do about Israel.

Walker's parents were impoverished sharecroppers. Calling Israel "worse" than the Jim Crow South in which they lived cheapens their history and the histories of millions of African Americans who for years couldn't vote (a right extended to all in Israel) and who couldn't even to sit on buses and in restaurants with white people.

No such barriers exist in Israel, where people of all religions and ethnicities mingle in public and private places.

And to call Israel - with its universal suffrage, internationally-recognized judicial system, and rainbow society of immigrants (including thousands of political refugees from African and Arab countries) - "worse" than a regime like apartheid South Africa is just plain wrong. Again, it cheapens the history of those who suffered and died under apartheid.

What lies behind this irrational hatred for the Jews?

Alice Walker's daughter, Rebecca Walker, offers some insight with a searing description of her unusual childhood.

For starters, Rebecca was fathered by Mel Leventhal, a Jewish lawyer and the son of Holocaust survivors. A mixture of guilt and disdain may have played some role here.

Yet more – ideology was always more important to Alice than people, and she espoused the radical view that childhood enslaved women. Walker ignored and neglected Rebecca for years. Resentful of the chain of motherhood, she essentially left Rebecca to fend for herself from age 13.

Ultimately, Alice took the radical step of severing their relationship: “saying that our relationship had been inconsequential for years and that she was no longer interested in being my mother.” (London Daily Mail: “How My Mother's Fanatical Views Tore Us Apart”)

With Walker's latest salvo against Israel, her family's personal tragedy has lately become a tragedy for the entire Jewish community, as well. Alice Walker has turned her naïve, one-dimensional view of the world away from the crucible of her family and onto the world stage, bringing the same warped view to bear.

Anti-Semitism has been called the world’s oldest hatred. Through the years, it has provided people with an easy scapegoat for the world's suffering: if only there weren't Jews, everything would be great.

In modern times, this hatred is often redirected to Israel, painting the country and its citizens as uniquely evil and sinister on the world stage.

Sadly, Walker isn't the only famous person to tarnish her reputation and legacy by spurious attacks on the Jewish state.

In recent years, Nobel Prize-winning Archbishop Desmond Tutu has become known less for his struggle against South African Apartheid, and more and more for his obsession with Israel and Jews: saying it's time to forgive Hitler; talking about sinister Jewish lobbies; and repeating other bizarre anti-Semitic and anti-Israel tropes.

A spate of Nobel Prize winners has turned to comparing Israel to the Nazis.

Plenty others allow their legacy to rot into anti-Israel rhetoric. Mairead Corrigan Maguire won the Nobel Peace Prize in 1977 for her work to end violence between Protestants and Catholics in Northern Ireland, but lately she's been squandering her moral capital bashing Israel obsessively, comparing Israel to Nazi Germany and embracing radical anti-Israel campaigns. José Saramago, the Portuguese writer who won the 1998 Nobel Prize for Literature, was better known in the last years for lurid statements comparing Israel to Nazi Germany. Tom Paulin was once known as one of Britain's greatest living poets: an Oxford professor and frequent fixture on British television and radio programs. Until lately, that is, when he's compromised his considerable legacy by questioning Israel’s very right to exist and calling on some Israelis to be "shot dead."

In all these cases hostility toward Israel begins to spill over into hostility toward Jews. Alice Walker's opposition to people reading her books in Hebrew is a move against the language of the entire Jewish people. To target the language in this way is to move vilification out of the political realm and make it personal.

What can we do in the face of such anti-Israel mania, especially on the part of well-respected cultural figures?

On one hand, we can and must educate ourselves to counter factual inaccuracies. There is no shortage of pro-Israel websites; the Jewish Virtual Library contains a treasure trove of information.

On a deeper level, perhaps the most effective way to counter anti-Israeli hatred is to recognize it for what it often is, a poisonous world view that hurts its host as much as its object. It appeals to those looking for a simplistic answer to complex questions; to those to whom the world is either black or white, good or evil; to people who lack the will to explore more complex understandings.

Sadly, Alice Walker's extreme views on Israel indicate a pervasive problem with fanaticism that, according to her daughter, has distorted her entire life. The danger for the rest of us is that her statements create an atmosphere in which ever more virulent rhetoric about Israel becomes the norm.

The Scary Jew Next Door

My True Hero
The Promise Of The Land
Which Chat Are You On?: Parshas Behar/Lag Ba’Omer
Do You Like Slow-Cooked Food? Thank the Jews
Comments
MOST POPULAR IN Jewish Society
Our privacy policy