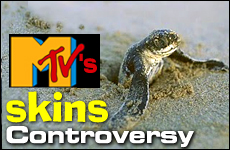 Children today are like leatherback turtles lured away from the life-giving ocean by the glare of artificial lights.

A beach in Costa Rica. Pitch black darkness. Not even a flashlight shines on the sand. The only light comes from the glowing ocean, where living organisms emit bioluminescence and the rolling waves refract and reflect the warm glow of the moon and stars.

Pacing up and down are dedicated volunteers who have divvied up the beach into three sections, each section patrolled by a cadre of save-the-planet idealists. They walk back and forth in search of hatching leatherback sea turtles. It is not easy to find these tiny creatures, but these environmentalists are on a mission to save the endangered leatherback turtle.

Leatherback turtles, in their time of propagation, climb well past the highest tidemark onto solid beach, dig down to create their nest, lay their eggs, cover it all up and then crawl their way back into the ocean, no longer concerned about the next generation. Under the sand, the eggs stay warm and cozy, until hatching time. About three months later, the eggs begin popping. As that happens, the sand above the eggs begins shifting and you can see a slight depression, a sand bowl that hints of the nest underneath, the first give-away sign volunteers look for. But in the dark of night, it is not so easy to find.

Following a street lamp, a sea turtle will end up on pavement, to be crushed by the next vehicle coming around the bend.

It can take about two hours for the newly hatched turtles to emerge triumphant onto the beach surface. Volunteers don't help the turtles at this point. It is all up to the creatures themselves to make their way onto surface ground. The work strengthens their muscles and it is the natural progression of their first step in newly-hatched life.

The volunteers come in on the next step of the turtles’ journey. When the sea turtles finally emerge onto terra firma, the volunteers escort and protect them as they make their dash from sandy nest to life-sustaining ocean. A beach at night can be perilous to a newly hatched turtle. There are predators at every turn. Even a crusty old crab might be tempted by the tender new flesh of a hatchling and might latch out his bony arm and grab it into his lair to be served up at dinner.

But their biggest problem is the beckoning artificial lights. Sea turtles know they must head to light. That is their survival instinct; they hatch at night and the light is on the ocean, giving them a clear beacon of where life-sustenance can be found. However, when civilization encroaches upon the beach, artificial lights go up – car headlights, road spotlights, hotel rooms, neon bar signs. Artificial light pouring in from every direction, glaring brighter than the soothing warm glow of the ocean light. Light that sea turtles head to now. So the sea turtle can lose its way, heading to death and destruction instead of its healthy habitat. Following a street lamp, a sea turtle will end up on pavement, to be crushed by the next vehicle coming around the bend.

Recently making waves is MTV's graphic new show called Skins, aimed at teenagers and depicting a racy, anything-goes lifestyle and a “just do it” attitude. Many, most notably the Parents Television Council, are questioning whether the pushing-the-envelope show even borders on child pornography. MTV released a stiff statement that included the inane claim that they had a sense of “responsibility” to viewers, even as they claimed Skins is not a harmful show for teens.

People used to heckle me on the “ghetto” mentality I harbor – I believe youth should be shielded from graphic, gratuitous violence and sex. Give them free choice, folks will argue, let children be exposed to anything and everything, but ask them to make the right choices nonetheless. When counseling teens on the streets, I always ask them if they want random relationships, the sort of use-me-I’ll-use-you attitude that Skins sports. Or do they want to aim for a nurturing relationship, the kind that leads to marriage and a lifelong commitment.

Shows like Skins put out glaring, blaring lights that take teens' focus away from building up healthy self-esteem and healthy relationships.

A study by researchers in Ohio State University and Brookhaven National Laboratory found that teens would actually rather have a boost to their self-esteem than a physical hookup. Yet shows like Skins put out glaring, blaring lights that take teens' focus away from building up healthy self-esteem and healthy relationships. Kind of like the turtle lured away from life-giving oceans by artificial lights, children these days are lured to indulge in behavior that will crush them. They never stand a chance to see the gentle beckoning life-giving light of Jewish values and healthy self-esteem.

Many thanks to the Goldring Marine Laboratory in Costa Rica for the inspiration on this piece.

Going for Gold
Evolution 2.0: The Coming Darwinian Revolution
Chukat 5782: Let’s Play the Blame Game!
The Sin of Moses: The Two Ways to Communicate
Comments
MOST POPULAR IN Current Issues
Our privacy policy