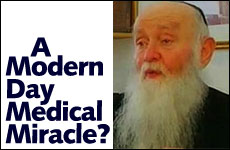 What took place this past month at Hadassah Hospital’s Department of Neurology was not expected even by the most senior neurologists.

An ALS patient, a chronic disease with no known cure that causes a slow and painful process of muscular dystrophy- who was wheelchair-bound and had difficulty speaking and breathing, underwent an complete turnaround. From being handicapped and dependent on others for his most basic daily needs, suddenly Rabbi Rafoel Shmuelevitz stood on his feet, and returned to teaching at the flagship Mir Yeshiva, which he heads.

The treatment that is responsible, it appears, for the dramatic improvement in his condition was developed by the Israeli biotechnology company Brainstorm, and is based on stem cells. This is the first time that someone who has been treated with stem cells has regained abilities which were previously lost. Despite the great caution that is guiding the doctors as they discuss the rabbi’s condition, it is difficult to ignore the excitement which surrounds even the most stern of staff members when they talk about the turnaround that the rabbi has experienced…

Rabbi Rafoel Shmuelevitz recalls, “I couldn’t talk. It was difficult for me to breathe, and my lack of balance made it impossible to get up from my wheelchair. Even when they supported me I was able to walk only with difficulty. My students couldn’t understand me when I spoke.”…

In 2010, after a series of tests at Minnesota’s Mayo Clinic, his doctors told him the difficult news, Rabbi Shmuelevitz had ALS [also known as Lou Gehrig's Disease], which is considered the most severe known neuromuscular disease. ALS patients gradually lose all of their motor abilities, until they eventually lose their ability to breathe and die from suffocation. The vast majority of patients die within three to five years following diagnosis. A small number of patients, for example physicist Stephen Hawking, manage to survive for years, but are almost unable to function.

“The American doctors and the Israeli doctor who treats me, Professor Menachem Sade of Wolfson Hospital, agreed that the only possible way to improve my condition would be to receive stem cell treatment at Hadassah,” explains the rabbi. “That was my final hope.”

“A few days after the treatment, my whole life began to change.”

Last May, the Ministry of Health granted approval to the Israeli biotechnology company Brainstorm, specializing in the development of technologies and medications based on stem cells, and the Hadassit company associated with Hadassah Medical Center, to begin a clinical trial of a new treatment based on cell therapy, which is meant to delay or stop the degeneration of nerve cells in ALS patients…This is the first treatment of its kind in history.

Because of the severity of his condition, and the fact that he was suffering from two different muscular diseases, the rabbi was not allowed to participate in the clinical trial…However he was given the treatment as a “compassionate treatment,” intended for patients who have no other hope.

A month ago, the rabbi was given the treatment for the first time, and the effect on him was incredible. “A few days after the treatment, my whole life began to change,” he says with a smiling face. “My speech began to improve, it became easier to breathe and I began to walk unassisted. I am even able to climb stairs. My students understand every word I say. It’s truly a miracle from Heaven. I am a new person as a result of the treatment I received.”

“It’s hard to describe the excitement that took hold of us as a result of the amazing results of this treatment,” says Brainstorm president Chaim Leibovitch…

Also the doctors could not remain apathetic to the amazing effect of the treatment on the rabbi’s condition. “The change that occurred in him was huge, and also the objective improvement in his functioning was extremely impressive,” explains one of the hospital’s doctors with excitement. “From being handicapped, a person who couldn’t walk and couldn’t talk, a significant amount of his abilities have returned…There is no doubt that a great drama is taking place here. We need to remember that we are talking about a single isolated case. On the other hand, even isolated reports like this can also signal a medical breakthrough.”

Encouraging results, even if they are on a smaller scale, have also been witnessed among some of the 12 patients participating in the clinical trial…

As is the way of the world, the rabbi and his students see things a little differently [from the doctors]. His students talk about “Mass prayer rallies” and “A miracle.” At the same time that top medical minds were laboring to rehabilitate the rabbi’s systems at the hospital, at the Mir Yeshiva the top minds were constantly reading Psalms for his recovery, and learning pages of gemara in order to “tip the scale” in the upper worlds in favor of the 74-year-old rabbi, who has stood for close to 30 years at the head of one of the largest yeshivot in the world (with over 7000 students).

Such a dramatic improvement in such a nearly hopeless situation has very rarely ever been witnessed.

“The rabbi’s family decided when they started treatment to turn to all of the yeshivot in the world to request assistance,” says the rabbi’s assistant. An emotional plea went out in the name of important rabbis to pray for the rabbi’s recovery, and his full name was released for special “Mee Sheberach” prayers worldwide. When the rabbi was lying on the treatment table at the hospital, thousands of students gathered to read Psalms at the Lakewood Yeshiva in New Jersey, at the Ponevitch Yeshiva in Bnei Brak, and at Jerusalem’s Mir Yeshiva.

“The rabbi saw the announcement that went out with his name and broke out into tears,” his assistant says. “During the two or three days that he was at the hospital, the prayers didn’t stop. After that we returned home, and an extreme improvement began in his condition. He got up and started walking, even without support…Everyone who saw him said that this was a revealed miracle, that this is simply a new human being.”

At this stage, of course, it is still difficult to state whether we are talking about a miracle or just a historic medical breakthrough, which will grant hope to patients suffering from one of the most difficult and cruel diseases that exists. But about one thing nobody is arguing: such a dramatic improvement in such a nearly hopeless situation has very rarely ever been witnessed in the natural world.

This article originally appeared in Yediot Achranot. With thanks to Jewishmom.com

April 1st and the Jews

In Kishinev, Shabbat Among the Exiles
What Makes Eli Run?
The Tyranny of Materialism
Science Enters the Mysterious Inner World of Consciousness
Comments
MOST POPULAR IN Israel
Our privacy policy