A Sukkah Grows in Brooklyn 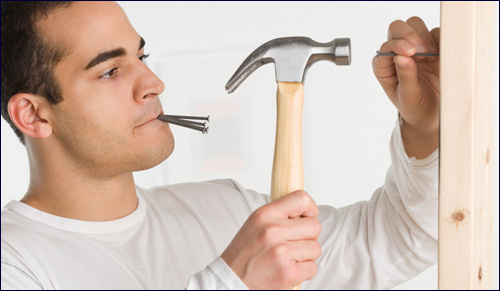 When neighbors band together, a small miracle happens in Canarsie, NY.

When I was 15 years old, I really wanted a sukkah. There was one at our synagogue, but I dreamed of having my own sukkah.

I asked my parents if we could have a sukkah of our own, but my parents said, “No, maybe next year, but not this year.” I was disappointed.

I could hardly sleep that night after hearing this great news.

Early in the morning, I headed to my parents’ friends’ garage and carried back all the pieces of wood I needed to build the frame of the sukkah.

When I got all the wood home, I realized that even if I somehow managed to put it together, all I would have was the frame for a wall-less sukkah. And there were only 10 hours left to go before Sukkot.

But the dream was too wonderful for me to give up, so I got to work. I banged a nail here and cut a piece of wood there, as I prayed for my sukkah to grow.

At about 11 AM while I was banging away, my Israeli neighbor, Yossi, walked by. “What are you doing?” he asked.

“I’m building a sukkah,” I replied.

For the first time in the history of East 82 Street in Canarsie, Brooklyn, the sounds of sukkah building were heard in the air.

Yossi quickly ran home and returned in a flash with a proper hammer and a working saw. “At the rate you’re going, you’ll finish by Passover. Move over and let me give you a hand.” For the first time in the history of East 82 Street in Canarsie, Brooklyn, the sounds of sukkah building were heard in the air.

After awhile, another neighbor, Lenny Waldman, walked by and asked, “What you guys doing?”

“We’re building a sukkah,” I said.

Lenny looked at us and asked, “What’s going to be the roof for your little sukkah?” Suddenly I realized that in the rush to build the sukkah I had forgotten about the most important part – its special kind of roof!

“I don’t know, but we will think of something. We need something which grows which won’t wither during the eight day holiday.” Lenny, who was a quiet man, said nothing as he disappeared into his house.

A few moments later, he reappeared with a ladder and a large pair of shears. He began to cut large branches from the huge evergreen tree in my front yard. “I always wondered why you let it grow so large,” Lenny said aloud, as he continued to buzz the tree.

Henry Gordon, who lived with his 92-year-old mother and drove a cab in the city, was parking his cab as he heard Lenny cutting my large evergreen tree. “Lenny, what you doing?” he asked.

“The young fellow next door is building a sukkah and I am helping him out with covering,” he replied.

“Well, the frame looks okay, but what are they using for walls?” Henry asked.

“What about the walls? Where are they?” Henry asked me.

“I don’t know, I guess I’ll grab some old sheets and tack them to the frame.”

Henry looked at Yossi, the Israeli builder. He glanced at Lenny, the tree-trimmer and then he said, “I have an idea, I’ll be back soon.”

Ten minutes later, he reappeared pushing a wheelbarrow full of doors. “When I drive around the city, anytime I see an old door, I stop the cab and throw it in the trunk. I don’t know why, but I’ve been doing it for years. Let me donate them as walls for your sukkah”.

Yossi, Henry and I began to attach the doors to the frame and as the sun began to move downward in the sky, my sukkah began to stand up.

Murray Cohen was the last neighbor to come across the street. “Hey, what are you all doing?” he asked. Then he answered his own question. “Hey it looks like you’re building a sukkah. Wow, I’ve never seen one of those around Canarsie.”

Murray looked at the motley crew and said, “Wait one minute. I have something for you,”and he ran across the street to his house.

He returned with a large sheet of green felt. “I fix pool tables for a living, and when they redo the old tables they give me the old green felt. I have no use for it but I think if we staple the felt to the doors it will give the sukkah a real homey feeling.”

Soon Murray was stapling felt across the doors as Lenny put the finishing touches on the evergreen roof and Yossi, the sukkah builder, hammered in the final nail.

It was 6 PM. Candle lighting was just minutes away, but as I looked at Lenny, Yossi, Henry and Murray and then at my sukkah, I saw that sometimes dreams do come true.

That night, as I was about to make Kiddush in my sukkah with my family, there was a knock on the sukkah door. In walked Lenny who said, “Hey, looks pretty cozy in here.”

Soon Henry appeared, explaining that he was simply admiring his handiwork, followed by Yossi and Murray who both said, “Let’s see how this sukkah really works.”

As I recited Kiddush, I glanced at the faces of Yossi, Lenny, Murray and Henry, proudly standing in my dream sukkah.

Many years have passed since then and even though I now have a large, roomy sukkah, I fondly remember the most beautiful, precious sukkah I ever had – my first sukkah, the one we all built together.

The Antidote to Our Entitled Generation