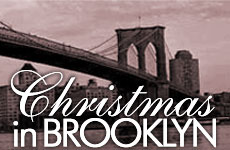 My parents had no clue why they lit the electric menorah on Chanukah.

When I was a child, I had no idea that I lived in a Jewish ghetto. The fact that almost everyone that was part of my life was a fellow “Member of the Tribe” was emotionally censored by the humdrum vigor of America of the late 50’s. We all pretended that our ancestors had come on the Mayflower.

In fourth grade, one of our least creative arts and crafts projects of the year was making “holiday trees” out of construction paper. Incontrovertibly, the results were meant to enhance “The Season To Be Jolly.” Never mind that the teacher, Mrs. Tobin (real name) and at least 90 percent of the class were Jewish.

I was enchanted by the store window displays, the music, the TV shows. I felt that my being Jewish was a definite social faux pas. I had dark curly hair and olive skin. I envied the blonde WASP models that beamed down from every billboard.

I could not discuss my feelings with my parents. They were even more Jewish than I was. They had friends named Irving, Goldie and Shirley. While none of my friends were named Dick, Jane or Sally -- which would have been ideal -- Diane, Steven and Robin were a definite move forward in my subconscious search for genuine integration into the dominant culture.

Diane was one of my closest friends. Her door faced mine in our apartment complex. Her unspoken dream of being part of the world portrayed in “Leave it to Beaver” was far more passionate than mine was. She wanted a tree.

YEARNING FOR A TREE

Diane knew that she couldn’t have a TV father who came home from the insurance office every day smiling in a three-piece suit, or a Mom who had a 23-inch waist and cleaned her spotless kitchen in three-inch heels. Her father worked in a restaurant, and her mother’s roots showed. A tree was a tangible link to a world that was not hers.

Her parents bought Diane what was advertised as a “Chanukah Bush.” It was about three-feet tall, made of some sort of silvery synthetic material and could be trimmed with tinsel and lights. I hated it. It was a cop-out. It was a concession to the world of Shirley and Mel. It wasn’t green or pine. Worst of all it wasn’t normal. I had what I considered to be a better alternative -- I had nothing.

Neither of my parents had a clue as to why they lit the electric menorah on Chanukah in accompaniment to my grandmother’s unforgettable potato latkes other than that is what Jews do. We had all heard of Judah the Maccabee and his war against the Greeks -- which had no apparent connection to either the menorah or the latkes, or any aspect of our lives.

In truth, the mystique of Christmas had no real competition.

My grandmother was the most Jewish one of us all. Her rich Yiddish and her attachment to at least the outward manifestations of Jewish traditions put her so far beyond the pale that it was safe to talk with her.

"Jill has a tree," I told her, watching carefully for her response. The response was not long in coming. She whispered a choice and unprintable Yiddish curse and gave a theatrical expression of nausea.

That's when her stories began to flow. Some came out that day, and some much later. Some no doubt will never be told.

Christmas was the most likely time for pogroms. It was a time for hiding in the cellar with one’s sisters, and hoping that the combined strength of four strapping brothers would hold the door closed long enough for the mob to move on to easier prey. I knew better than to ask who the “easier prey” would be. It would be a friend, or a neighbor, or the butcher, or his wife.

What she told me got me to read more on the subject. As a rather precocious and lonely only child, I found a second home in the library. Slowly the story unfolded. Jews had committed Deicide. We were cursed for eternity. I found out about the Crusades and the Inquisition. I found out that the burning core of hatred had not disappeared in the 20th century. The ambiguity of the Church during the Holocaust was not ambiguity at all when placed under scrutiny.

My children live in a different world than I did as a child. They see bright Ramadan lights illuminating the walkway to the Jaffa Gate as they walk to the Kotel just as I saw bright Christmas lights on Flatbush Avenue. But they will not feel that special opening of the heart when they know that Ramadan is here once more. They have seen and heard too much violence in their young lives.

There is another reason that they feel differently than I did. They do not have “nothing” as the only other option. They know what the menorah stands for. They know that the hidden light of Torah will ultimately prevail over the forces of darkness.

They know that the Maccabean wars were fought for the survival of the spirit, not for the survival of the body. The miracle of the oil that the Maccabees used to light the Menorah in the Temple is the ultimate statement of our identity. There was enough oil in the one container that they found still in its pristine state, sealed by the High Priest to last one day. It lasted eight days, long enough for more oil to be brought from the Galilee.

No compromise was made. The possibility of using impure oil was dismissed out of hand. And God answered us. He responded to our rejection of darkness with revelation of light.

In the same spirit, He will respond to us again.

We can use the days of Chanukah to bring this special light into our lives. And year after year, it will glow with greater and greater illumination until we see the final light, the light of redemption.

The Night the Rebbe Danced the Kazatsky

Chanukah in the Soviet Gulag
Should I Break Up, Get Engaged or Keep Dating?
Time Is Your Precious Commodity
A Constant World in Flux
Comments
MOST POPULAR IN Chanukah
Our privacy policy