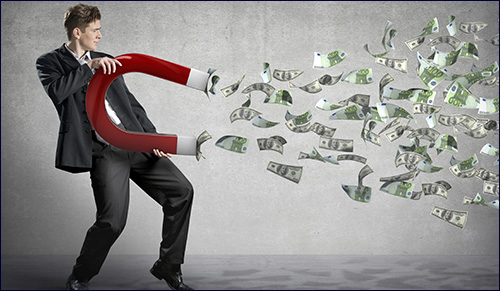 Sukkot and the sabbatical year teach us the Jewish perspective on wealth and happiness.

The festival of Sukkot this year has an added feature. It’s part of the once-every-seven-years cycle of biblically designated sabbatical years known as shmitta. And both of them share a fascinating Torah insight about money that has tremendous contemporary relevance.

Unlike Christianity which taught that “the love of money is the root of all evil,” Judaism considers wealth a divine blessing. As reward for Abraham’s faith, the Bible records that he was granted financial success. The priestly benediction that begins with the words, “And may the Lord bless you” is taken by the Talmud to refer to economic gain. Gold and silver are what made it possible for us to build a temple to God as well as to achieve countless noble goals.

But Judaism was also painfully aware of a problem that all too often accompanies the accumulation of great riches. The supposed wise saying of our day is “You can’t be too thin or too rich.” I’ve seen all too many examples that prove both these statements are false. “Anorexia” is the medical term for the sickness of people who refuse to acknowledge that too little, in terms of weight, may prove fatal. “Affluenza” is a newly coined description for the ailment that allows too much wealth to destroy the lives of its owners.

Now part of the title of a best-selling book, Affluenza: The All-Consuming Epidemic, by John DeGraaf, David Wann, and Thomas H. Naylor, affluenza is described by the authors as “a painful, contagious, socially-transmitted condition of overload, debt, anxiety and waste resulting from the dogged pursuit of more. It’s a powerful virus running rampant in our society, infecting our souls, affecting our wallets and financial well-being, and threatening to destroy not only the environment but also our families and communities.”

Affluenza means knowing how to make money, but not how to live. Affluenza can turn you into an egomaniac. Money can make fools of important persons just as much as it can make important persons out of fools. Affluenza proves that wealth costs some people everything they are. In the words of twentieth-century philosopher Bertrand Russell, “It is preoccupation with possessions, more than anything else that prevents men from living freely and nobly.”

Too bad that one of the wealthiest men in the world didn’t learn this lesson until it was too late. Sam Walton was the multibillionaire CEO of Wal-Mart, the fourth largest U.S. corporation. As he was lying on his deathbed, he struggled to get out his last three words on earth. He had given his life for his business. In that area, he succeeded beyond anyone’s wildest dreams. Yet, it was at a price. He hardly spent any time with his wife, his children, and his grandchildren. He didn’t allow himself the moments of loving interaction, of cuddling a grandchild on his lap, of playing and laughing and rejoicing with his loved ones. His final three words? “I blew it!” He had the billions, but by his own admission he had failed.

Even the wealthiest man can’t eat more than one dinner.

Dennis Pearne is a clinical psychologist and a pioneer in the emerging field of wealth counseling. His specialty is treating clients with “sudden wealth syndrome.” Those are people who inherited large sums of money, won the lottery, or sold their Internet businesses for billions of dollars.

Now they were faced with the dilemma of, “What do I do next?” How many cars can you buy? How many homes can you own? As the Yiddish saying goes, even the wealthiest man can’t eat more than one dinner.

Sudden wealth creates issues that go way beyond money. The money can cause traumatic responses and lead to shame, anger, confusion, isolation and guilt, among other things. With inherited money, you hear stories of what goes on in families – the control game, blackmail, gender discrimination, resentment children have at being raised by nannies, and a whole host of psychological issues.

The way Pearne has helped people the most is by working with them on a value-based exploration in order to focus on proper priorities. Together, the “wealth counselor” and the “sudden wealth victim” explore basic questions of life: What is the relative importance of living a wealthy lifestyle versus accumulating more wealth versus helping friends and family versus philanthropy? What do you do with the money you will never need for yourself? How would you want the world to improve – and what can you do now personally to turn your ideal into reality?

One of the most striking things Pearne has found is that when his clients seriously reconsider their options in life, they invariably choose to devote themselves to social change, to philanthropic endeavors, to helping to create a better world - all those very things that Judaism has been stressing in order to make our lives meaningful and filled with true happiness.

“Money is a neutral object, a tool that can be used positively or negatively,” he said. “The power of receiving a lot of money is so great it can destroy someone’s life or empower someone to have a much better life. It all depends on how you deal with it.”

And that is precisely why we celebrate both Sukkot and the sabbatical year.

True happiness comes not from our possessions but from who we are.

Sukkot was the time when, in the agricultural society of old, farmers found themselves the wealthiest they would be all year. It was the time of the harvest. The granaries were full. They were blessed with far more than their immediate needs. It was their moment of affluenza. So the Torah commanded them to leave their homes and to sit in simple frail huts through whose coverings they could look up at the heavens and remind themselves of the source of their blessings. They needed to recall, in a festival appropriately named “the season of our joy,” that true happiness comes not from our possessions but from our priorities, not from what we own but from who we are, not from our mansions that offer physical comforts but from our families with whom we create everlasting bonds of love and affection.

The sabbatical year, just as the Sabbath of days every week, served as a powerful reminder that we are not meant to be slaves to our work but that our work is to be a means to allow us to fulfill our higher spiritual calling. Six years farmers worked the fields. On the seventh the Jews were the first and the only people in the world, under divine mandate, to proclaim a national sabbatical – a year when tilling the land was replaced by toiling in the vineyards of Torah. Study was an entire people’s occupation. They could not yet have known the concept of fallowing, the now recognized truth that letting the land rest would enable it to replenish its minerals and allow it to become even more productive, but they trusted God’s promise that they would survive in even more bountiful measure.

The message of Sukkot and the sabbatical year speaks to our technological society with perhaps even more urgency than it did in biblical times. It restores the proper balance that our lives require between wealth and self-worth. It teaches us the difference between success measured by the marketplace and the lasting achievements that create a spiritual legacy. In a time of great wealth, we need to embrace the biblical wisdom that came to liberate us from the most insidious and seductive kind of slavery – the slavery of addiction to wealth without linking it to its spiritual value.

Sukkot and the War against Terror

Kabbalistic Secrets of Sukkot
Why My Iranian Mother Didn’t Want Me to Become a Religious Fanatic
The Jewish History of Prague
Why the Sexual Revolution was Bad for Women
Comments
MOST POPULAR IN Sukkot
Our privacy policy
Aish.com Is Looking for Great Writers