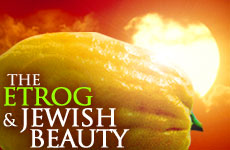 Every civilization and every philosophical system searches for the meaning of beauty. In classical Western thought, "pursuit of the Beautiful" is deemed to be as basic as the quest for the Good and the True. Contemporary culture has been profoundly influenced by this perspective. To this day, the striving for beauty is a dominant and desirable component of an accomplished individual -- an ideal to be devoutly pursued.

At first glance, it would seem that the enshrinement of beauty as a value in and of itself is not a major Jewish priority. The oft-quoted phrase, taken in isolation, "beauty is vanity" (Proverbs 31:30), seems, on a cursory level, to cast beauty in a negative light.

It seems to me, however, that a compelling argument ought to be made for the vital and central role that beauty occupies in the Jewish worldview. In order to do so, we must show that, for Judaism, beauty is something , and means something entirely different than in all other thought systems.

What, then, is distinct and singular about the Jewish concept of beauty? To answer this, one looks to the Torah to find the sources of the Jewish idea of beauty. Like all abstract theories in Judaism which ultimately find their expression in concrete mitzvot, the idea of beauty, as well, finds a tangible realization in the central mitzvot of the holiday of Sukkot. The Torah requires: "And you shall take unto yourselves on the first day [of Sukkot] a fruit of a beautiful tree (pri etz hadar)."

The Talmud (Sukkot 35a) wishes to define what constitutes a "beautiful tree" by analyzing the Hebrew word for beautiful, "hadar." The sages conclude that it is the etrog tree, because the word "hadar" is interpreted to be a fruit which "dwells continuously all year on the tree" (ha-dar, literally, "that which dwells"). Thus, they understand the word "dar" to mean the opposite of temporary or intermittent residence; rather, it implies permanence, a continuous process through time (similar to the French "duree" or the English "endure").

Beauty is the indomitable power of life, the determination to live on despite all difficulties, the drive for eternity.

The etrog tree fulfils this requirement of constant dwelling, for most other fruits are seasonal, but the etrog grows, blossoms and produces fruit throughout all the seasons: in the heat and the cold, in the wind and in storm -- it stubbornly persists! It endures! And in the Jewish view, that is why it is beautiful.

Beauty, then, in classical Jewish sources, means the indomitable power of life, the determination to live on despite all difficulties, the affirmation of the victory of life over death, the drive for eternity.

In this light, we can understand another striking mitzvah in the Torah. Concerning the obligation to honor the elderly, the Torah states: "ve'HADAR'ta p'nei zakein," which is usually translated "and honor the face of the old person." The word hadar, however, literally means "beauty", so what the verse is actually telling us is to ascribe beauty to the old face.

What is beautiful about an old face? This very idea contradicts the basic attitude of Western civilization which, since the time of the ancient Greeks, has always associated beauty with youth. In the contemporary Western world, the entire cosmetic industry is predicated on making people appear young, if they wish to look beautiful. The attempt is precisely to make the old face seem younger. Yet the Torah ascribes beauty to the old face, precisely because it expresses the ongoing triumph of a life which endured and persisted throughout the arduous passage of time.

How much determination, courage and will to live do we see in an old face! In this regard, the Talmud (Kiddushin 33a) tells us: Rabbi Yochanan used to stand up even before aged Aramean heathens saying, "How many troubles have passed over these." The Torah, thus, requires us to see in aging persons, not that they are fading away into oblivion, but to recognize in them the unremitting surge to live, and of the yearning of the immortal soul deep within each individual for eternity.

Therefore, Beauty in the Jewish worldview is not a value to be understood in isolation. It is not an attempt, as in other aesthetic systems, to merely "capture the moment," with its concomitant glorification of youth and the attempt to preserve it for all time. In Judaism, beauty inheres in the basic Jewish historical sensibility: the palpable experience of apprehending the eternal in the flow of passing time.

In a similar vein, the Menorah, which is central in the service of the Holy Temple, and which has become a symbol of the Jewish people itself, is described in the Torah as "ner tamid," an eternal light. The source in the Torah reads: "And you (Moses) shall command the children of Israel that they bring unto you pure olive oil beaten for lighting to make a light shine out continuously." (Exodus 27:20)

The Sages of the Midrash point out that the olive -- the beaten olive -- whose oil burns continuously, is the true symbol of Israel. The Midrash quotes the verse in Jeremiah (11:16): "The Lord called thy name (Israel) a leafy olive tree, beautiful with goodly fruit," and the Midrash asks, why is it the olive tree with which Israel is identified?

The answer given is that Israel is ly similar in many of its essential characteristics to the fruit of the olive tree. The olive is beaten, pressed, ground down, and then it produces its oil which gives rise to glowing light. So, too, the people of Israel: Despite all the oppression, cruelty and exile visited upon them, they are not destroyed. Rather, they continue to shine on magnificently, ever brighter.

It is significant that in the passage quoted, Jeremiah declares not only the dauntless character of Israel's persistence in the face of every hardship, but defines this quality as being the very source of Israel's beauty -- "leafy olive tree, beautiful with goodly fruit..."

When we complete the study of a tractate of the Talmud, we recite "HADRAN alach -- we shall return to you." We proclaim that our studies and the knowledge gained will not simply slip into the past, but that we shall continuously go back, revive, rejuvenate and find new meanings in our past learning. The very word hadran, from the root hadar, thus has basically the same meaning as the word hadar, as we now understand it. To continually persist and to be beautiful are identical!

The holiday of Sukkot dramatizes the paradoxical idea that while on the one hand, we are to recognize the temporary and transient nature of human existence on earth by residing in temporary sukkah booths, at the same time, we are to affirm the immortality of life and the eternity of Israel by taking hold of the ever-enduring etrog. The dialectic tension in these contradictory elements establishes the framework of our comprehension and experience of the beautiful. Discovering, affirming and struggling in the face of implacable difficulties, in the face of mutability and death itself, for the realization of the eternal, creates the Jewish sense of beauty...

The ultimate beauty of Israel itself lies in the triumph of its eternity.

Reprinted with permission from Jewish Action, the magazine of the Orthodox Union.

Sukkot and the War against Terror

How to Tap into The Meaning of Sukkot: 5 Inspiring Life Lessons
The 21st President of the United States: Failure or Inspiration?
Hiding Their Jewishness
The Jewish Pope: Following the Questions Home
Comments