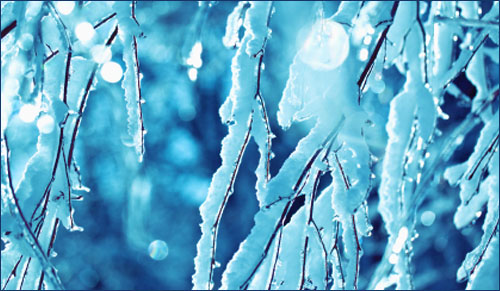 Stranded on a mountain, under the stars, I felt fear and God’s protective love.

The mountain didn’t have enough challenging trails. That’s what a group of us decided after a few boring runs down black diamond slopes that would have been considered beginners’ material at places we were used to skiing. On that foggy, freezing afternoon, we stood beneath icicle clad pine trees and considered making our own way down. I can’t remember who finally convinced the rest of the group, but soon we were all ducking underneath a yellow caution tape that was strung between two huge trees, ignoring the sign beside it: Danger! Do Not Ski Off the Marked Trails.

The run was perfect. The snow was powdery, the slope was steep and the thrill of carving our own path was off-setting the fear of the unknown terrain below us. But then Brian, who was at the front of the group, skidded to a stop and called out to us.

“Slow down guys. I think we might be stuck.”

We reached him and gazed out at the steep cliff just inches from our skis. A powerful wind whipped around us as Brian’s voice echoed off of the mountain. “Maybe we should try to jump it?” he shouted.

“Are you crazy? We’ll die if we jump,” Seth said. “We don’t know if there’s snow below or rocks below. No one’s jumping.”

“Let’s walk through the forest that way and see if we can find a way,” I suggested. The air filled with the clicking of everyone’s skis being released mingled with the unspoken fear among us. This was in the era before kids carried cell phones; we were completely on our own. What if we couldn’t find our way? What if it gets darker and colder? What if we had all just made the last and dumbest choice of our young lives? What if we didn’t get second chances?

Trudging through the forest with our skis on our shoulders, we tried to make light conversation to dilute the panic that grew stronger as the day got colder. The sky began to darken and we were out of ideas and energy. I sat down beneath a tree, and Karen slumped down beside me.

“You guys better get up. You can’t sit down in this kind of temperature. Just keep walking. Guys, get up!” Seth’s voice sounded like it was thousands of miles away even though he was standing right above us.

Brian’s face fell as he urged Seth to follow him. “We’ll go ahead and get help. We have to go faster.”

Karen and I sat in silence as the wind piled the snow around us like walls of soft cotton. I was terrified. What if this is it? Right here on this freezing mountain, just because I didn’t want to stay on the trails?

“Aren’t you religious?” Karen asked me, the words coming out in frozen, stuttered exhales.

I nodded and looked up at the bare branches above us, yearning to touch the sunset drenched sky.

“So what do we say at a time like this?” Karen asked.

“The Shema. My grandma taught me to say the Shema whenever I’m afraid.”

“How does it go?” Karen asked. I began to teach her the beloved prayer of my childhood, word for word. The lullaby that had chased away all my pain; the sentence that had anchored a place for me in an anchorless world. Around us, the walls of snow grew higher. And the branches stretched out above us like a roof made of prayer.

“This reminds me of our sukkah,” I said to Karen. I described to her the walls of our sukkah, and the way we could see pieces of the stars through the branches above us, like jewels that could set the soul on fire. I spoke about the gleaming china and the steam of the chicken soup hitting the cold air. About the decorations and the songs and the guests who would sit bundled on the folding chairs. I spoke about how the moonlight made the silver sparkle and how on some nights the wind would rustle the white tablecloth like a rippling, majestic cloud.

“You’re lucky. I wish I had seen a sukkah,” Karen said, her voice fading. But her words echoed inside of me. I was so lucky. I had a life that had been graced with a shelter for my soul. Year after year, I felt God’s embrace as He held me there, showing me that He was happy to have me back in His Palace made of stars and moonlight and rippling tablecloths. I had known the comfort of faith surrounding me on all the sides. I had felt the joy of being cradled in God’s unconditional love. No matter how far off the trail I had gone, He had always invited me back inside. Inward bound, every year, I had left behind all the places that were fleeting and disappointing; I had basked in the beauty of the truth, embraced by the purity of the sukkah’s all- encompassing protection.

As I gazed at the ice sparkling off the tree branches above me and at the walls of snow around me, I saw that He was sheltering me now as well. With all the sukkahs that I had ever known and would ever know. With the words of the Shema rising in the air above me. And with the sound of help arriving as footsteps grew closer. Seth and Brian had found the ski patrol. We could hear the voices growing closer as the first stars appeared through the trees above us.

I can still hear the echo of that Shema that rose above and beyond us on that freezing day. Year after year as I sit in the sukkah, I remember how blessed I am. I was welcomed back into His Palace made of stars and moonlight and unfathomable love. I was held in a sukkah made of snow.

The Etrog and Jewish Beauty
What Makes Eli Run?
The Tyranny of Materialism
Science Enters the Mysterious Inner World of Consciousness
Comments
MOST POPULAR IN Sukkot
Our privacy policy

What Makes Eli Run?
The Tyranny of Materialism
Science Enters the Mysterious Inner World of Consciousness
BBQ Bourbon Cheese Kugel Recipe
Korach 5782: Visit to Lift the Spirit
That Time The Ivy League Found A Way To Limit Jewish Enrollment
Would You Rather Be Right or Happy?
Korach’s Unique Punishment
Who Was Josephus? The Controversial Backstory of the Famed Historian
Should I Break Up, Get Engaged or Keep Dating?
1 2 3 … 2,893 Next »