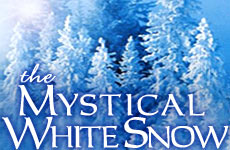 The snowy streets are slippery and it's cold and wet. It's also a special time to get close to God.

Few experiences in life compare with waking up in the morning after a snowfall and looking outside. The sight is stunning, the landscape glorious and beautiful, and the feeling one has is nothing less than sublime. Only after modernity with its high-powered engines, tampers with winter's wonder, does the snow become filthy and unpleasant.

Where does this feeling of awe come from? What is this creation -- snow -- that only appears in the winter?

First, another question. Why are all the biblical holidays crowded into the spring and summer? Wouldn't it have made more sense to space the holidays more evenly throughout the calendar year?

The Maharal, the great 16th century philosopher, comments that the Jewish calendar can be divided into two sections. Half of the year, from Passover until Sukkot (spring through summer), has the force of spiritual Ohr (light) as its primary power, while Choshech (darkness) rules the fall and winter months.

The implications are clear. The season for Spiritual Light is the spring/summer, and it is only then that one can actualize the greatest amount of spiritual energy. Fall/winter is a time for Spiritual Darkness and is not ideal for tremendous spiritual growth. In fact, the Maharal actually describes the winter as being "outside of the realm of time." This is because winter does not offer growth, neither agriculturally nor spiritually, thus in a certain sense the winter cannot be acknowledged as being part of any "real existence" due to its lack of spiritual developmental value.

We can now understand the uneven arrangement of the biblical calendar. The holidays mentioned in the Torah all take place during the spring/summer months, because it is then that the potential for a real, profound, spiritual growth exists due to the power of Ohr (light). God wanted us to actualize growth during the summer and then to maintain that growth during the winter.

Why did God create the world to live under Darkness -- lack of growth -- for half the year?

Because it is extremely difficult to “get high” and stay there constantly. You can't expect a baseball team to play every single game as if it's the World Series. It's just too hard to remain on that high level of intensity all the time. So too, in the spiritual realm God does not expect us to be growing constantly at a high, fast pace. Every day can't be Yom Kippur. Therefore, God set aside half the year for strong spiritual growth, and the other half for maintenance of that spiritual growth.

How were we to hold on to that growth? Did God leave us without any assistance? The answer leads us full circle to our most fascinating subject – snow, as described in the Midrash:

From where was the dry land of the earth made? From the snow that is under God's Throne of Glory. God took it and threw it upon the water, the water then froze, and the dust of the earth was formed. As the verse states (Job 37:6) "To snow, God said: Become land!"

The Midrash implies that snow at its very essence is closely related to God's Throne of Glory and thereby, to God Himself.

A possible explanation is based on some basic facts we know about the colors black and white. Black absorbs all other colors within light rays, while white reflects all other colors. We must wear Tefillin that are completely black because we must absorb all of God's wisdom and direction. God "wears" Tefillin that are white because He reflects all wisdom and guidance.

We sense from the Zohar the meaning and symbolism of the color white. Snow, in being the purest form of white, also represents the idea that God, who is sending the snow from the heavens, is the "Reflector of all Wisdom." White snow is the object which descends from God's "wearing white Tefillin" to remind us that God created and maintains the world and we must serve him wholeheartedly.

The Maharal describes snow as being an illuminating force that is tantamount to Spiritual Light. This is why God made the earth from snow (as mentioned in the Midrash earlier) because people on earth need to be reminded of God's involvement in man's affairs. By creating the earth from snow, God has placed a spiritual force that is present at all times in the earth, enabling us to actualize spirituality. And by causing snow to fall at certain times, God sends us a reminder to actualize this spirituality.

This is why God makes snow in the winter. In the winter we do not experience biblical holidays, it is our lowest point of spiritual inspiration. God, therefore, sends us snow; contemplating snow's profound meaning helps us feel connected to Him once again. Snow descends and covers the ground as if to shout, "Remember that it is God that is constantly “covering” the ground and providing everything in our life. Draw closer to Him!"

So the next time it snows, instead of being upset that you're going to be late for work, be reminded of the deeper truths of this world. It is wintertime, time to bask in the glory of God, as reflected in the pure, white snow.

Snow: The Dark Side
Korach 5782: Visit to Lift the Spirit
That Time The Ivy League Found A Way To Limit Jewish Enrollment
Would You Rather Be Right or Happy?
Comments
MOST POPULAR IN Spirituality
Our privacy policy