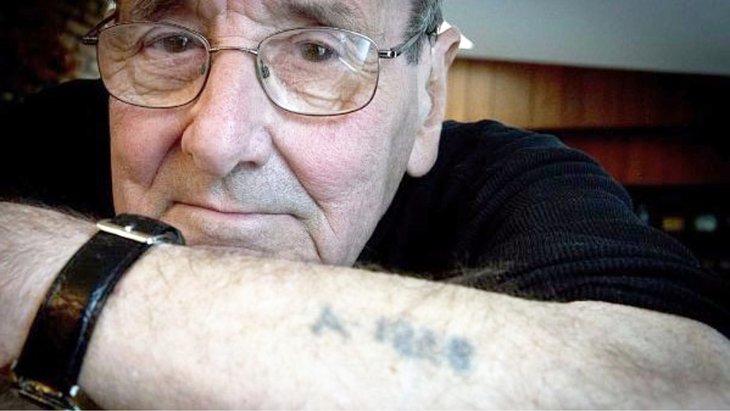 For Werner Reich. magic sparked a crumb of hope during the Holocaust.

In the hell of Auschwitz it was a magic trick that gave Werner Reich hope. The 91-year-old Holocaust survivor remembers seeing the trick to this day.

As a 16-year-old, he had come back from a work assignment, climbed onto the top of a bare wooden bunk in the concentration camp barracks and found another inmate doing a card trick. Reich recalls, “It was like finding a gorilla in your bathroom. You can’t comprehend where it came from, what it was doing there. It knocked my socks off, although I didn’t have any.”

The older man, Herbert Lewin – whose stage name as a magician in Berlin had been The Great Nivelli – kindly explained how the trick worked without being asked. “I remembered every detail. It was the first trick I’d ever seen in my life. From that point on I practiced that card trick every single day in my head,” says Reich.

Balm for the Soul

“The trick provided for me a mental diversion from the daily gnawing of hunger and the constant fear for my life. It gave me something to think about, something that was a goal.”

He knew the rhythm, the movement, the flow of the trick well enough to recreate it in England after his liberation from Auschwitz, Poland. 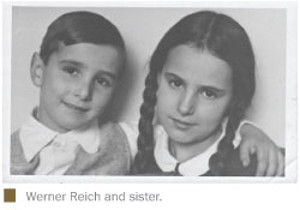 The gift of a card trick during the unimaginable, harrowing time spawned a lifelong interest in magic. Although Reich doesn’t perform magic for pay, he enjoys using it to uplift the spirits of hospital patients and friends. He also donates his talent for fundraisers.

A member of the International Brotherhood of Magicians and the Psychic Entertainers Association, Reich says magic has taught him how to think outside the box and approach problems from a different angle. He has learned to think on his feet, maintain presence of mind and take command of an audience.

“For this reason, I have never had a ‘bad’ audience and am a successful speaker even in the worst school.”

Teaching Youths Not to Hate

Imprisoned in jail and concentration camps from ages 15 through 17, the nonagenarian uses his energy to speak 100 times a year and promote Holocaust awareness at schools, colleges, synagogues, churches and conventions worldwide.

Sometimes he is called on to do an intervention. “Anti-Semitism has been here all the time. It’s just coming to the surface,” says Reich. For instance, a school where teens had been caught painting swastikas invited him to teach them the meaning and consequences of their actions.

The response is always positive, he says. Even though he has every right to play the victim card, Reich tells audiences not to feel sorry for him. 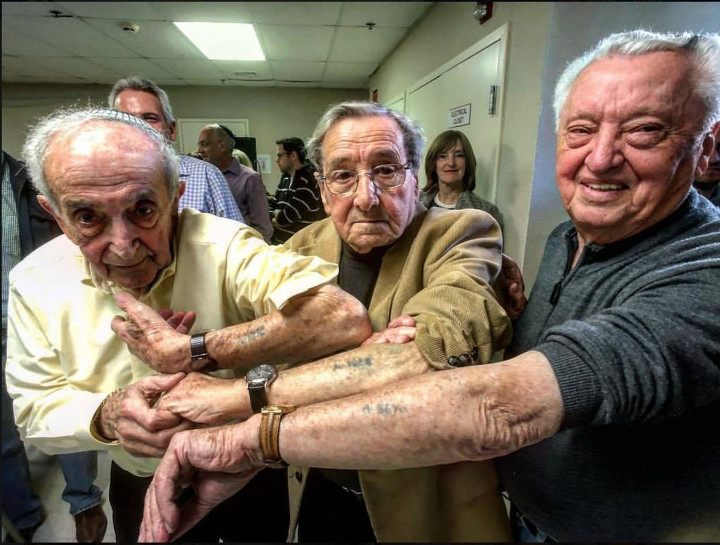 “I have had a very good life!” he reports. “What is important is not to be a bystander. We are all responsible for each other. I always quote Dr. Martin Luther King Jr.: ‘In the end, we will remember not the words of our enemies but the silence of our friends.’ I beg them not to be a silent friend.”

Born in Berlin in 1927, he describes his early years as a typical middle-class Jewish life. His father worked as a mechanical and electrical engineer. His mother was a proud German who had served in the army in World War I, saved the lives of soldiers and received an Iron Cross military medal.

When Hitler came to power in 1933, Germany stopped allowing Jews to work at major companies, colleges and hospitals. Reich’s father lost his job. The children had to leave school.

At age 6, Reich and his family moved to Yugoslavia, where his father had served during WW I as an officer in the Austro-Hungarian Army.

“In 1933 people thought in two years Hitler would be out and we’d go back home. We had to sell our house for next to nothing. When we left, 25 percent of all our financial means was confiscated by the government as an emigration tax. We came to Yugoslavia and my father couldn’t find job because the country was strictly agricultural,” Reich recently told an audience at the William Breman Jewish Heritage Museum in Atlanta.

“I was a kid, I was very happy. I went to school. I learned Croat and Serbian. I didn’t know the problems my parents had. In 1940 my father died, then a few months later Germany invaded Yugoslavia. Everything got turned upside down.”

His mother felt safe because of her military service, but she feared for her children and placed the elder, a daughter, with one couple and Werner with another who worked in the resistance movement. He quips, “It’s like hiding the cheese in the mousetrap.”

Werner lived a lonely life, cooking, cleaning and developing film for the resistance movement. One morning there was a knock at the door. Several Gestapo agents burst in and threw everything out of the closets. One stood guard over Reich with a gun, ordering him to leave the door open when he went to the bathroom.

The secret police then arrested the 13-year-old and took him to prison, questioning and hitting him for hours, no matter what answers he gave.

The secret police then arrested the 13-year-old and took him to prison, questioning and hitting him for hours, no matter what answers he gave. They locked him in a basement cell with a concrete floor and bucket for a toilet and fed him only liverwurst sandwiches for three days. “They obviously lacked imagination as far as food was concerned,” he says dryly.

He spent two months in different prisons. In one cell in Gratz, Austria, he looked out a third-floor window to the prison yard below and saw his mother walking in a circle. It would be the last time he would ever see her. He then spent 10 months in Terezin, a concentration camp north of Prague in the Czech Republic.

Little could Reich imagine the horrors to come. “I was sort of convinced all of this was going to stop very soon. I didn’t know anything about death camps.” 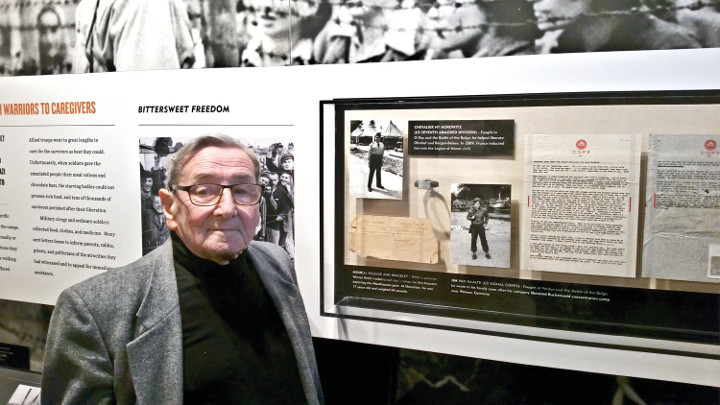 He soon found out as one of 2,500 prisoners shipped via railroad cattle cars. “They gave us a piece of bread and a couple of cans of sardines the Red Cross must have sent. Buckets overflowed after an hour. We were lying in our feces and urine.”

Stealing the Horses’ Food to Survive

After three days the train doors opened. “It was a scene out of hell. We asked where we were. They told us we were in Auschwitz.” Stripped, shaved and tattooed with the number A-1828 on his arm, Reich lived on 400 calories a day. After a couple of months there, he passed through three selections by Dr. Mengele. The vast majority were killed after that.

“We were trying our best to survive. It was a question of life or death.” He worked in the stables and stole the horses’ food. After nine months there, in January 1945 he and 60,000 other prisoners went on a three-day death march during which 15,000 died. He then suffered a four-day railroad transport in coal cars to the Mauthausen concentration camp in Austria. In open railroad cars, they endured snow, ice and death from frostbite. 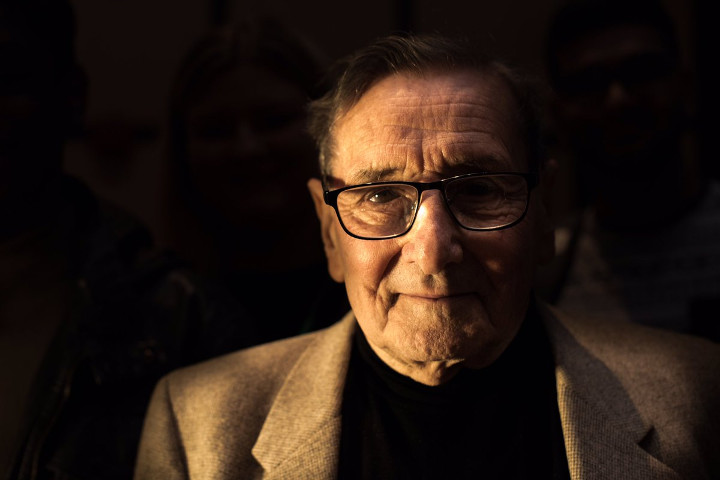 At Mauthausen, he relates, “We got a tablespoon of moldy bread a day. I slept next to a dead man for three days just to get his rations.”

When liberated on May 5, 1945, at the age of 17, Reich weighed just 64 pounds. He then went to Communist Yugoslavia. After regaining his strength, he managed to escape to England, find work and get married. He and his wife, Eva, moved to New York, where his sister settled after the war.

A Lucky Life, A Lucky Man

Reich spent 10 years studying in college at night and worked as an industrial engineer. He and Eva were married for 61 years until her death in 2016. “She was the love of my life. I have two sons, David and Michael, two delightful daughters-in-law and four grandchildren. Life has been very, very good to me. I really have no complaints. I was lucky. I was really lucky.”

Herbert Lewin – The Great Nivelli, the magician whose stage name derived from reversing the spelling of his last name – also survived the war. He wound up settling in New York less than 30 minutes away from Reich. After Lewin died in 1977, his former bunkmate spotted the obituary in a magician’s magazine. They never met again after Auschwitz.

Who Will Save the Baby?

Facing Goliath
Bechukotai 5782: Divine Retribution
Behar 5782: Working to Live or Living to Work?
The Wholeness of Being Broken
Comments
MOST POPULAR IN Spiritual Odysseys
Our privacy policy