A Jewish Psychic’s Predictions for 2018 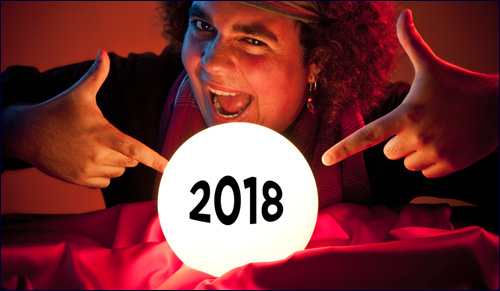 There are so many ways of finding out what the future may hold. You could speak with experts in various fields. Study patterns of occurrences from the past. Explore statistical research and projections. But who has the time and energy for all that? I want answers and I want them now. So, for the ninth year in a row, I visited Madame Zahava, a Jewish psychic with a 93% rating on Yelp, who operates out of a tiny storefront on Fairfax Avenue in Los Angeles. Aptly named, too, because “Zahava” means “gold”, which is pretty much what you need to hand over before she’ll agree to meet with you. But I digress.

Here are Madame Zahava’s top predictions for 2018, based on her psychic abilities factored in with what I could afford.

Jewish surgeons will eventually be replaced by Jewish robot surgeons

“There will be exciting innovations in robotic technology and medical technology that will revolutionize medicine and health treatments.”

Jewish surgeons will eventually be replaced by Jewish robot surgeons, thereby eliminating the need for Jewish mothers and fathers to nag their children about becoming doctors. The new Jewish robot surgeons will perform perfectly, bill their patients accurately, and be programmed with jokes such as: “They’ve just found a gene for shyness. They would have found it earlier, but it was hiding behind a couple of other genes.”

“The advancements of medicine will raise humans’ life expectancy up to at least 200 years of age.”

“Scientists are going to discover a new planet behind the sun, which they were unable to see before, due to the equipment they had available to them.”

Astoundingly, the new planet will be inhabited and look exactly like earth with one exception: rather than fresh fruits and vegetables being the healthiest foods, this planet’s healthiest foods include pastrami on rye, matzoh ball soup, and cherry cheesecake. A year from discovering this, every Jew on earth will have moved there.

“2018 is going to be a good year for having children. Due to the planetary alignments, people will have an easier time than ever getting pregnant.”

I realized Madame Zahava knew what she was talking about here, because she herself has twelve children, all of whom are stationed in the front lobby of her shop to collect the fees and “upsell” customers for more pricey services such as contacting a deceased relative during a séance—and convincing him or her to go bowling with you.

“More and more well-known people are going to come forward with their stories about their own personal UFO sightings.”

Barbra Streisand will finally share her own traumatic alien abduction story. In it, she is kidnapped and beamed aboard the Venusian mothership, where she is forced to undergo extensive scientific tests and then sing “People”. During the song, there is not a dry five eyes on any of the aliens’ faces.

“There will be serious talks about creating an outpost on Mars for future habitation of humans.” A Jewish study proposal is suggesting ways that this outpost be built close to the water but not too close, adjacent to good schools and delis, located in a low-crime area, be convenient to transportation, and zoned for synagogues and gyms with saunas so that a nice schvitz won’t have to be sacrificed as part of this move to another planet.

“I see dark hair in style for the fall and winter in 2018 fashion, especially black hair or dark brown hair with copper streaks. Natural hair accented by scarves, berets, and easy-to-maintain, tightly braided or brushed-out styles, will represent a period of spending less time on outer appearances and investing more time on developing one’s inner life.”

A comment from Madame Zahava’s Jewish mother: “For this we scrimped and saved to send you to college? So you could make fashion predictions that may or may not come true? Your brother Larry is a respected dermatologist and your cousin Sheila just made partner at her law firm. Get it together, Zahava. Your father and I are sleepless over this.”

Mother Earth is damaged and angry. She is a powerful force of nature and will release very destructive energies!

Madame Zahava made it clear that Mother Earth could, if she wished, choose to deal with these feelings by signing up for her Jewish Meditation for Angry Planets weekend seminar. It’s ordinarily $2500, but if she acts within the next week, Mother Earth could have it for the special price of $1,999. As an added free bonus, Madame Zahava will throw in a planetary massage and séance package, which normally goes for $849.95.

Israel’s high speed rail between Tel Aviv and Jerusalem will be completed.

Okay, as nice as it is to have some positive predictions about Israel, how much psychic skill does one actually need to predict something like this, which has already appeared in countless news articles already with a planned April 2018 completion date? Oh, sure, a psychic wants to have a high rate of accuracy for his or her predictions, but if all the predictions are of things already scheduled and publicly announced to happen, it casts some doubt on the psychic’s abilities, no? You might as well predict that McDonalds will sell over 100 hamburgers in 2018.

Place your bets, sports fans! There’s a lot of money to be won. On the other hand, if the Patriots don’t win, this could kick off the plot to an excellent movie thriller. The plot? Moishe Feinblatt bets his entire life savings on the Patriots’ victory. When they lose, he concocts an elaborate plan to make his psychic’s life a living hell. I’m seeing Larry David as Moishe, and Scarlett Johansson as Madame Zahava. I predict Academy Awards.

Election Top Tens
Don’t Believe in Other Gods Versus God is One
Seeing Without Eyes
Why Shouldn’t We Eat Whatever We Want?
Comments
MOST POPULAR IN Jewlarious
Our privacy policy
Aish.com Is Looking for Great Writers