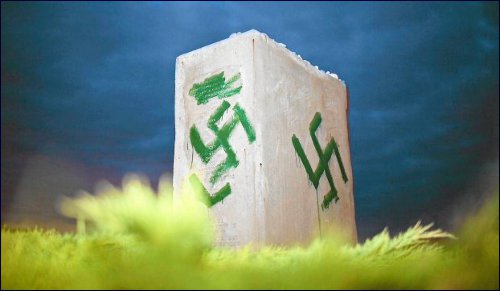 Should the ADL global study on anti-Semitism be cause for alarm?

On July 10, 1941 in Nazi-occupied Poland, half the town of Jedwabne brutally murdered the other half -- 1,600 Jewish men, women and children. Individual Jews were clubbed and stoned to death. Polish men cut the head of the youngest daughter of the cheder teacher off and then kicked it around. The majority were forced into a barn which was then set ablaze. Only seven Jews survived, hidden by a Polish woman. According to Jan Gross's chilling book, Neighbors: The Destruction of the Jewish Community in Jedwabne, Poland, the Nazis tried to persuade the Poles to keep at least one Jewish family from each profession, but the Poles responded, "We have enough of our own craftsmen, we have to destroy all the Jews, none should stay alive."

The Jews of Jedwabne weren’t killed by faceless Nazis; they were murdered in cold blood by their neighbors who knew them, led by the town’s mayor, Marian Karolak, and sanctioned by the town council.

The Jews of Jedwabne weren’t killed by faceless Nazis; they were murdered in cold blood by their neighbors who knew them.

For decades Poland tried to cover up the pogrom, blaming Nazi and Gestapo soldiers for the massacre. Gross’s book definitively showed that it was the locals who committed the atrocities, sparking national debate.

Sixty years after the massacre, on July 10, 2001, Poland commemorated the deceased by unveiling a monument at the site of the slaughter, changing the text on the original stone memorial that shifted the blame to the Germans. The monument now reads, "In memory of the Jews of Jedwabne and surrounding areas, men, women, and children, fellow-dwellers of this land, murdered and burned alive at this site on 10 July 1941." Notice that it does not specifically mention the Poles.

In Sept., 2011 the memorial was defaced with a swastika and graffiti that read, "They were flammable" and "I don't apologize for Jedwabne."

I was in the middle of reading Neighbors when the ADL’s Global 100: An Index of Anti-Semitism was released. It shows that more than a quarter of the world’s population harbors intense anti-Jewish sentiment. Apparently 1.1 billion people hate me, even though 70% of those queried have never met a Jew. Is the survey cause for alarm?

Pew recently released a different study about Europe. The research study shows that anti-Muslim sentiment in Europe exceeds that against Jews by a significant margin. (See the chart below.) 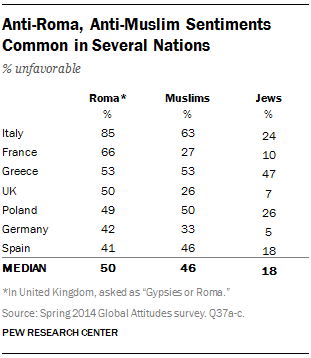 Jews are not the only victims of bigotry. On a whole, people are bigots and hatred exists everywhere, anti-Semitism being just one form of it. In fact in some quarters it’s even worse for Muslims. And, as many Aish.com readers point out to articles that discuss recent anti-Semitism, what’s the surprise? We know that many non-Jews hate Jews. The world is filled with bigots, so what’s the big deal about the ADL survey?

Perhaps Jan Gross’s book provides an answer. Anti-Semitism is different. Throughout history Jews have not only been discriminated against, they’ve been incinerated. They’ve been brutally murdered en masse by their neighbors. They’ve been the target of genocide, the Holocaust being only the most recent example.

Throughout history Jews have not only been discriminated, they’ve been incinerated.

Racism indeed exists, but Jew-hatred is unique in its intensity and virulence, as well as its universality and longevity. As Reverend Edward Flannery writes in The Anguish of the Jews, “As a historian of anti-Semitism looks back over the millennia of horrors he has recorded, an inescapable conclusion emerges. Anti-Semitism is different because of its longevity and consistency.”

Furthermore, anti-Semitism is completely irrational. Hatred of one group can usually be traced to concrete, well-defined (and mistaken) reasons. The reasons for given for anti-Semitism are contradictory. As the Aish HaTorah seminar Why the Jews? states, “Jews are hated for being a lazy and inferior race ? but also for dominating the economy and taking over the world. Jews are hated for stubbornly maintaining their separateness ? and, when they do assimilate ? for posing a threat to racial purity through intermarriages. Jews are seen as pacifists and as warmongers; as capitalist exploiters and as revolutionary communists; possessed of a Chosen-People mentality, as well as of an inferiority complex.” Clemens Heni, a young German scholar and author of Anti-Semitism: A Specific Phenomenon, writes, “No single group of people, except for the Jew has been singled out and blamed simultaneously for mutually exclusive developments like capitalism, communism or liberalism and humanism.”

It’s hard to imagine non-Jews killing their Jewish neighbors because they are Jews. But the town of Jedwabne was not on a different planet, and it didn’t happen a thousand years ago. The Holocaust was planned and executed by human beings just like you and me, who hated Jews enough to murder them. We cannot brush anti-Semitism under the carpet and blithely think that people are different today.

The ADL survey may have revealed that 46% of the world population has never heard of the Holocaust, but it is imperative that we know about it and learn a lesson or two. Jew-hatred isn’t just racism; it can conflagrate into genocide.

It’s also not rational because its roots transcend human thinking. God has made a covenant with the Jewish people; we are an eternal nation. He won’t allow us to disappear as a nation, despite the incessant pull of assimilation and intermarriage. Anti-Semitism is one of His ways to remind us that Jews can never fully assimilate into the non-Jewish world; Jews will always be reminded that they are different. As attributed to Rabbi Chaim of Volozhin: If the Jew doesn’t make Kiddush (the sanctification of Shabbat and holidays over wine), then the non-Jew will make havdallah (the service said at the end of Shabbat separating Shabbat from the weekdays).

Days of Miracle and Wonder

Ahmadinejad at the U.N.

Hope in Hell
Live Abortion Panel
Morality and Abortion: Three Views
There Are No Limits
Comments