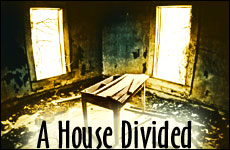 God's House will be rebuilt only when each Jew truly cares and loves his or her fellow Jew.

Well I looked into a house I once lived in
Around the time I first went on my own...
Now the distance is done and the search has begun
I've come to see where my beginnings have gone
-Jackson Browne

Not long ago I sat with a man in the back of his home when –- and I don't even remember how we got to this point of the conversation -- he declared that "this house has lost its soul." I did not know what he meant and was not comfortable pursuing his painfully honest statement. Rest assured, we are not talking about a dilapidated home that has been abandoned by someone who took out a mortgage way beyond their means. No, this is truly a stunning and artistic dwelling, sitting on a piece of property that most would die for.

The synagogue had lost its soul.

While I cannot understand why he feels the way he does about his home, I began to get an appreciation of the concept that same week when I visited a very large synagogue on South Beach to look into the possibility of holding an Aish program there. This synagogue was once the jewel of all synagogues in Miami. It was where the who's who and the hoi polloi prayed. But today it is a different building. The powerful rabbi who led the congregation died many years ago. They have been through many rabbis and are now both rabbi and cantor-less. There really is not much activity except on Shabbat and a school that rents the building. I can only imagine what Shabbat services feel like on weeks without a Bar Mitzvah, in the large opulent sanctuary with only a few people attending. As I toured the building, checking out spots for a possible venue, I came to realize that it too had become a home that had clearly lost its soul.

Tisha B'Av -- the 9th day of the Hebrew month of Av -– is this week. It is the saddest day in the Hebrew calendar as both the first and second Temples were destroyed on that date. The rabbis in the Talmud tell us that the second Temple was destroyed because of sinat chinam -- gratuitous hatred that Jews felt for one another. Not unlike today, there were many different factions of Jews, but thankfully, unlike today, they more than "did not just get along", they actually turned on one another -- even violently.

Rabbi Yochanan ben Zakai had to be smuggled out of Jerusalem with the ruse of being a corpse in a coffin, not because of repercussions from the Roman tyranny but because he feared for his life from his fellow Jewish zealots. They would have opposed and killed him if they knew of his plan to make a deal with the Roman rulership by giving up Jerusalem in exchange for an alternative site, Yavneh, to continue Jewish study and to relocate the Sanhedrin.

Thankfully, we have not reached that point of Jewish infighting in our day and age. Unity does not mean that all Jews have to think, act and look alike. Nay, it is our diversity that has made us such a unique and powerful people throughout the ages. But when, as we saw in last week's Torah portion, people begin to express their personal needs without considering the larger affect it may have on the nation as a whole -- as Moses illustrated when he chastised the tribes of Reuben et al in their request to stay on the east side of the Jordon, ignoring how their request may affect the rest of the nation -- then the rot within the house has already begun. Even earlier in our history, close to its inception, Joseph's message to his brothers was not one of personal vendetta but of "Is our father still alive?" Did you not kill our father emotionally in your righteous indignation of your treatment of me?

Differences are never the issue; they are inherent to any group and certainly to Jews. But when those differences begin to take on a life of their own, when they become the raison d'être of the particular faction and supersede the overall good of the nation, then it is just a matter of time before the House of Israel begins to disintegrate and decay.

God's House will be rebuilt when its soul is resurrected and returned to it.

The Romans did not destroy the Temple; it was destroyed much earlier. The first cracks appeared even before it was built, during Joseph's generation. Structural faults set in during Moses' rule. Serious decay began to spread when Israel divided into two nations later on in our history. Such was the pattern for hundreds of years and with each internal conflict, the foundation, walls and roof deteriorated more and more. By the time the Romans got there, it was a building that was so rotted that it was well on its way to being condemned. It was already on the brink of teetering, the Romans were merely the wrecking ball.

The rebuilding of the Temple is not dependant on a group making a yearly statement by laying a cornerstone at the Temple Mount, nor by figuring out how to do away with the mosque at its site. It is not about creating a building campaign and hiring the best construction company, nor is it about singing about how much we want Mashiach. God's House will be rebuilt when its soul is resurrected and returned to it. And that can only happen when each Jew truly cares and loves his or her fellow Jew. Then, and only then, will the House once again have a soul.

And the house that grows older and finally crumbles

That only love can now rebuild

From Ruins to Hope
Blessing on Chewing Gum
Was Rahab a Prostitute?
Extras In Our Own Epic
Comments
MOST POPULAR IN Israel
Our privacy policy