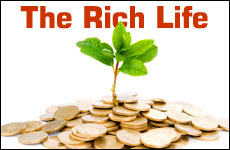 Uplifting lessons from a lifetime of financial struggle.

In my second year at university, my good friend and I rented an apartment in McGill's student ghetto, as those streets were affectionately called by their denizens. These apartments had a certain Bohemian mystique and sometimes quaint and decrepit charm. The rent was cheap, it was close to classes, and a variety of grocery stores and cafés dotted the landscape. The biggest selling point of the apartment, however, was the independence it offered. Living in the ghetto wasn't as confining as the dorms, or as wild as the frat houses and was, for many, our first attempt at setting up house complete with paying rent, cooking, cleaning and paying the bills.

We students didn't feel poor because we lived there for many other reasons aside from economic necessity, and when you're young, choosing "poverty" can run the gamut from idealistic to adventurous.

The year and a half I lived in that apartment created many pleasant memories. My roommate and I survived very well with minimal furniture and less-than-perfect amenities. And why? Because that was the prevailing attitude of the residents in the student ghetto. That's how everyone lived and how everyone was expected to live. It was like summer camp. No one complains about the living accommodations, because it's short-term and the rustic environment is meant to add to the fun.

I learned then that the attitude toward our economic situation is what determines whether we're rich or poor. Most of the world lives in poverty compared to Western standards. But most of the world is not miserable because of it. Children laugh and play in India and Kenya and China, without feeling deprived that they don't have an LCD screen or an iPod. That simply doesn't constitute their expected standard of living. It's the unrealized expectations of what we should have in our lives that make us miserable.

In the student ghetto, we were all equal, and what we had is what we expected to have. We were content, probably happier than many of us are today with so much more. It's all a matter of what you tell yourself.

In 1989, I visited Rumania. People lived in such primitive and deprived conditions that I kept asking why they didn't revolt. Someone must have heard me because two weeks later, they did. On my first day there, I changed money on the black market; for 100 American dollars I received a fistful of lei. It was the most currency I had ever seen in one place. There was only one problem. There was nothing to buy. Ceausescu’s government had left Rumanians living in poverty with empty shelves in their stores and no produce in their markets.

Whereas usually there was a lot to be had, but I didn't have the money to buy much, now I had lots of money but there was nothing to be had. I was the richest I had ever been, relatively speaking, and if I could only find it, I could buy anything I wanted. I remember going for a pedicure and tipping the person more than it cost. It was a wonderful feeling but it was a bittersweet triumph. What's the good of having all this money if you can't buy anything?

Buying power is one way we judge wealth. Possessions is another way. But it's all relative. Hot water, heating, light, food -- all were in poor supply in Rumania at the time. Was I really richer than I am now with sufficient food, heating, light -- even though I can't afford Western-style luxuries?

What Goes Around, Comes Around

There's a monthly bazaar in my neighborhood where people donate items to be sold -- clothes, toys, accessories, etc. The proceeds go to feed the needy. I like to go there because I can buy literally anything I want. I usually pick up some nice clothes in good condition for almost nothing, and feel like I'm doing a good deed while I'm at it.

One day, many years ago, my son came with me to the bazaar. I said, "Pick anything you want." He settled on a set of plastic rackets for a ball game. I told him that I was sure we had something like that at home. But he wanted them anyway, and since it was cheap and for charity, I bought them.

When we got home, I went to check if in fact we had the same rackets already. I then remembered that I had donated them to the bazaar (with my son's permission, which he had apparently forgotten as well). In other words, we bought back our own rackets.

Besides being amusing, this story brought home a salient point: What goes around comes around. One of the ancient Hebrew words for money is zuz, which also means "move" -- because money, by its nature, is always on the move, being transferred from one person to the next. Didn’t your mother tell you to wash your hands after handling money because so many people touch it? Perhaps not a great way to instill a love of money, but money does change hands a great deal. And we have to keep it moving.

When you keep it moving, it's benefiting others. But most of all, it's benefiting us. Earning interest, getting payback on an investment and winning a lottery are only some ways that money returns to you.

One time, I was in a particular financial difficulty and I had no choice but to contemplate putting my apartment up for sale. Just as I was about to do so, I received a phone call: I had bought a raffle ticket to help construct a local school building and they called to tell me I had won first prize. I had completely forgotten about it. The prize was a new car, which I was able to exchange for the monetary equivalent, allowing me to hang on to my apartment.

Notice the "what goes around comes around" law of the universe in action. I had given a little bit of money to help a school finish its "home" and I got to keep mine. You're not going to always see the results so clearly, but the principle is always at work. You give, you receive. If you keep the money moving, it will eventually move back to you. It's an immutable rule.

Perhaps the biggest lesson I’ve learned in not to get into debt. Being in debt is not a new phenomenon but the ways of amassing debt have changed and so has the mindset regarding it. It used to be that debt was the result of not being able to pay one's landlord due to a bad harvest. In other words, debt was the result of circumstance more than design. Nowadays, unsecured debt is something that one amasses willingly and almost as a matter of course. It's acceptable, and even de rigueur, to enjoy now and pay later. The only problem is that most of the time, one can't pay later, which leads to more debt and a vicious cycle which many people get caught up in.

The best way to avoid that cycle is to stay clear of debt. Don't buy anything (except for a house, and even that buy lower than your means) on installments. Instead, save up for it. Whether it's a car or a vacation, a dress or a meal, don't enjoy it before you can pay for it. It's as simple as that. No bank loans, no credit card loans, no loans of any kind (barring medical care for a life-threatening illness). If you can't pay for it, don't do it.

The only credit cards you should have are:

• A store card that offers discounts that exceed the cost of the card if you pay the card off every month. If you can't, it isn't worth the discount.

• One major, generally accepted all-purpose credit card, with low monthly and yearly fees and good advantages like bonuses and redeemable points, that you pay off entirely every month.

You should only use this card where you can't use cash, like on the Internet, or where you need to leave some kind of guarantee, like when renting a car. A credit card should not be used for everyday expenses like buying gas or food. All regular purchases should be paid, whenever possible, in cash.

I’ve learned that wherever I find myself on the financial scale, by practicing a few basic rules, I will always be the richer for it.

1) Give charity. You may need it someday.
2) Save something every month, no matter how small. It will grow into something big.
3) Live below your means. You may have to someday.
4) Invest in your education and training for future opportunities. This helps to turn the wheel faster.
5) Enjoy and be grateful for what you have. Don't wait until it's gone to appreciate it. There is always what to be grateful for.
6) Don't try to climb the ladder unless you're secure on the step below.
7) Know that everything can change in a minute, so be prepared -- emotionally, psychologically and financially.
8) Recognize your ultimate source of wealth -- God -- and pray, thanking Him for what you have, and asking Him for what you need.


Excerpted from The Money Book