Was that my father standing behind the barbed wire?

My father passed away last week. He was a great man who rose from the ashes of the Holocaust to build a successful business and, more importantly, raise a proud Jewish family. All of his children and 14 grandchildren were present at his funeral. A little over five years ago I experienced the most extraordinary thing that ever happened to me in my life and I wrote this article then. With his passing Aish.com is featuring as an editor's pick.

My father has three birthdays. Yes, three. His biological birthday is May 10, 1924. When he came to Canada after the war, he was too old to qualify as an orphan, so he had to rearrange his age a bit and make himself younger. 5/10/24 became 10/5/27 and he was now born on October 5, 1927. (Please don’t tell the Canadian government about this. I would hate to see him deported at this stage of his life.) Oddly, our family has been celebrating this completely fictitious birthday ever since.

My father was finally liberated from Dachau on April 29, 1945.

But it is his third birthday that he speaks about with the most emotion; the one that carries the most meaning for him. He spent years in various forced labor and death camps after his town of Staszow, Poland was liquidated by the Nazis in 1942. He was finally liberated on April 29, 1945 from Dachau concentration camp in Germany. My father has never been one to speak at length about his experiences as a survivor of the Holocaust, but he does talk about this one particular day. Among other things, I have heard him praise the American army for quickly delousing the inmates soon after they freed the camp. Being free from the Nazi hell and from the lice that infested his body for so long gave him a new lease on life.

The day after Yom Kippur I went to my office and did what I do after every Yom Kippur – not much. Not only am I tired from the fasting and teaching, but truth be told, I find the next day to be a bit of a downer. After intensely thinking about life, God, goals and being a better person, and trying to inspire 150 people who come to our Aish center for services, I am just not up to the everyday mundane grind that comes rushing back. So trying to recapture some of the seriousness and meaning of Yom Kippur, I found myself on YouTube and typed in "Dachau" in the search box. The top of the list was a film called Dachau Concentration Camp Liberation.

It was not a sophisticated piece, by any means. It consisted of photos slowly being panned to the background music from Schindler’s List. There were photos of soldiers approaching the camp and arresting surrendering Nazis, a bird’s eye view of the camp and photos of the main entrance and a gate with the infamous Arbeit Macht Frei.

A picture appeared of an American soldier walking on a wall perpendicular to a building, and I wondered, If my father were to see this short film, would he remember some of the structures and buildings? I briefly thought of showing him the film but knew I would not follow through due to his extreme sensitivity whenever the subject of the Holocaust comes up. In all the years I have known my dad, I have only heard snippets here and there.

At 1:50 into the film a photo appeared that made me hit the pause button. It was a relatively clear photo, a close up of sorts, of three inmates behind barbed wire, all smiling and waving – presumably at their saviors. The short man on the left has an overcoat, obviously given to him by one of the soldiers. The man on the right with the moustache is taller and appears to be saluting. They are wearing the familiar striped concentration camp garb.

And the man in the middle looks like my father.

Could this really be my father?

I began to stare intensely and analyze every detail of the physical features to see if they match my dad’s. The widow’s peak hairline, the shape of the face, the somewhat larger ear, the gap between his front teeth – all were consistent with his look. Could it be? Could this really be him? I kept asking myself. But the trait that made me think it was him the most was the shape of his waving hand. I have always noticed this about my father, how his index finger curls and seems slightly raised higher than his middle fingers and how his thumb comes to almost meet them. Today, thanks to his arthritis, his hand is almost frozen in that position, and this was the shape of the hand of the man in this photo.

I immediately emailed the link to my three brothers in Toronto with the subject line, “Something very weird” and told them to pause the film and tell me what they think. By next morning, they agreed that this could indeed be our father in the photo.

Then things got a little complicated. We were faced with the dilemma of showing this photo to my father. Will it bring back too many painful memories? Should we subject him to an image of himself from so long ago of the most horrible time in his life? What effect would possibly seeing himself in Nazi prisoner garb have on his psyche?

My oldest brother, Reuben, has always been closest to my father ever since he went to work for him in his meat packing plant at the age of 15. My dad gave him the most noxious job there to discourage him from working at Grace Meats, but packing tripe did not turn Reuben away. They have been very tight ever since. Reuben felt that we should think this through and “sit on it” for a while. “He has not seen the photo for all these years, another day or so will not change things.”

Sid, the next oldest brother and the peacemaker in our family, agreed. Murray and I wanted to show it to him but for the time being we deferred to the elder siblings. But the following day Murray came up with a Solomonic solution: Let’s show the picture to my dad’s one surviving sibling, Henya, who was with him in the camps earlier in the war and would be able to recognize if this indeed was him.

Murray called me that morning on his way to Auntie Henya. I told him to call me on my cell as soon as he spoke with her. Murray called me at 12:30 pm. "She was unequivocal – it's him. And not only that, but the man standing next to him with the overcoat was his childhood friend, Herschel D."

With that Murray then called my dad and asked if he wished to see a photo of himself on the day of his liberation from Dachau. He did. Murray went up to his condo and showed him the picture. With tears in his eyes my father declared, “Yeah, that’s me.”

On April 29, 1945 a handful of photos of the liberation of Dachau were taken by Robert Spring, an X-Ray technician serving with the 59th Evacuation Hospital of the U.S. Army Medical Corps. There were 32,000 inmates on that day and most of the photos taken by soldiers were of men too skeletal to discern their identities, too grainy to see any specific faces, or group shots taken from far away. But Mr. Spring decided to take one photo of a random group of nameless survivors whom he would never see again.To the Nazis, the man in the photo was prisoner number 147 963 and for 64 years and five months it was a photo of a nameless prisoner experiencing freedom for the first time in many years.

On the day after Yom Kippur in the year 5770, Tuesday September 29, 2009, it was discovered that the smiling inmate in Nazi prisoner garb was not just prisoner 147 963 , and he was not a random nameless survivor that a heroic soldier happened to capture on camera. He was born Icek Nachtigal, Yitzchak Dovid ben Reuvain, and he goes by the name of Irving Nightingale. He was born on May 10, 1924 but he will tell you that his real birthday is April 29, 1945.

And he is my father. 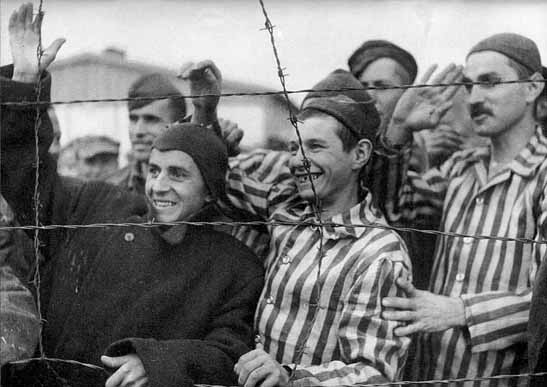 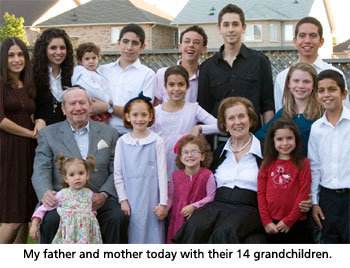 Everything and Its Opposite Is Given as a Reason for Antisemitism

Rescuing 100 Jews in Ukraine on Shabbat
It Takes A Lot Of Faith To Be An Atheist
How Instagram Brought Back This Nostalgic Soup
What Makes Eli Run?
Comments
MOST POPULAR IN Israel
Our privacy policy