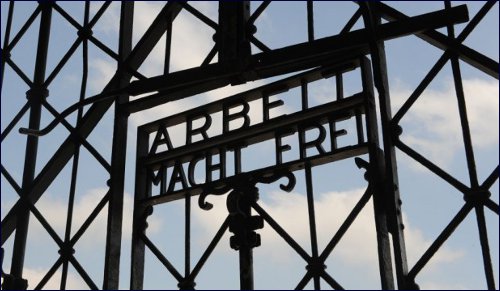 As the last generation to know Holocaust survivors, the theft reminds us of our responsibility to preserve their memories.

Twice in the past few years the entrance signs atop the main gates of some of Europe’s most infamous concentration camps – signs bearing the legend Arbeit Macht Frei, or Work Makes You Free – have been stolen.

Neo-Nazis from Sweden pilfered the infamous sign over Auschwitz’s entrance gate in 2009; it was later tracked down and restored by police. The most recent theft was at Dachau where an estimated 45,000 people were murdered.

Sometime during the night of Sunday, November 2, 2014, thieves made off with a portion of Dachau’s Arbeit Macht Frei sign – welded by slave Jewish laborers during the Holocaust – that marked the camp’s entrance. “It is the central symbol of the prisoners’ suffering at Dachau concentration camp and therefore has hit the memorial at its heart.” said the director of the Dachau memorial, Gabriele Hammermann. “The theft of such a symbolic object is an offensive attack on the memory of the Holocaust,” posted the Yad Vashem Holocaust Memorial in Israel.

Today the Holocaust is slowly being forgotten.

The alarm greeting this theft reflects a profound shift in the way the memory of the Holocaust is being preserved today. Until recently, survivors who witnessed the horrors of that era first-hand were present in our communities; they were able to educate and remind us of humanity’s darkest hour. Today, however, we’re in the midst of the end of that era. As the generation who survived the Holocaust ages and passes away, our memory and understanding of the Holocaust risks becoming poorer. As a result, the Holocaust is slowly being forgotten.

Statistics bear this out. A 2014 survey by the Anti-Defamation League found that fully half of all people world-wide have simply never heard of the Holocaust. Among the half who have heard of it, fully a third don’t believe the Holocaust ever really happened: they believe it’s a hoax foisted on the world by a conspiracy determined to mislead them.

Even in modern, western nations knowledge about the Holocaust is rapidly eroding. A 1993 survey found that 38% of adults and 53% of high school students in the United States weren’t able to answer the question “As far as you know, what does the term ‘Holocaust’ refer to?” In 2012, a survey found that 67% of French students age 15-17 were ignorant of the deportation of Paris’ Jews in 1942 – despite that topic being stressed in France’s schools.

Ignorance of the Holocaust handicaps people’s abilities to recognize anti-Semitism today, too. Last summer saw large crowds gather in European capitals to march and demonstrate in sympathy with Hamas – at times chanting “Hamas, Hamas, Jews to the Gas”. Hamas’ charter echoes classic Nazi tropes. One example: “with their money, they (Jews) took control of the world media….With their money they stirred revolutions in various parts of the world” (Hamas Charter, Article 22 ). A population wholly ignorant of those Nazi slanders has lost its ability to understand and condemn anti-Semitism today.

Here are three suggestions for ways we can maximize our ability to pass along this legacy.

Years ago my husband and I attended a Jewish conference with a wide range of speakers. Surveying the choices, my husband suggested we attend a talk given by a Holocaust survivor instead of some other, tempting sounding sessions. “We won’t have many more chances to hear people like this,” he explained, as we went to listen to the talk.

Afterwards, I thought of my grandparents and the legacy they had left me. They were refugees from Vienna who had only got out at the last possible moment. Most of their family and friends were killed. I’d grown up hearing stories about the Nazi takeover of Austria – how people cheered in the streets after the Anschluss, how long-standing friends and business associates suddenly turned on Jews they’d known for years. Grandma told me about the relatives we lost, who have no graves: our conversations and her teaching me their names are their only memorials.

There were other details, too, that deserve to be remembered: the German official who arranged to meet my grandfather after hours and gave him a precious visa, saving his life; the Orthodox Jewish business-owner in Chicago who lent an impoverished employee thousands of dollars – at great personal sacrifice – so that he could bring our family out of Europe. I’m the guardian of these memories now. I’m grateful that I’ve learned them so I can pass them along.

When my husband and I were planning our son’s bar mitzvah celebrations recently, we took one unusual step: instead of having our son lead the entire service, as some of his peers have done, we asked a member of our congregation to lead part of the service instead. This congregant and friend is a Holocaust survivor, and in addition to wanting to honor him on our son’s big day, we also wanted to link our son to him: to have our son remember all his life that at his bar mitzvah, a portion of the service was led by someone who survived the Holocaust and all its horrors.

Our children are the last generation who will have heard about the Holocaust first-hand. Seek out opportunities to connect them with survivors now, while we can. They are our future.

3. Deepen your knowledge and speak out

Learn more about the Holocaust. Read books, watch films, deepen your knowledge and understanding. Recognize that we have an obligation to teach, to speak out when we see the Holocaust minimized or misused, when ignorance threatens to erase the lessons of this era.

The first evidence of the horror to come was a string of about forty railway cars on a siding near the camp entrance. Each car was loaded with emaciated human corpses, both men and women…. The scene near the entrance to the confinement area numbed my senses. Dante's Inferno seemed pale compared to the real hell of Dachau. A row of small cement structures near the prison entrance contained a coal-fired crematorium, a gas chamber, and rooms piled high with naked and emaciated human corpses. As I turned to look over the prison yard with unbelieving eyes, I saw a large number of dead inmates lying where they had fallen in the last few hours or days before our arrival. Since all the many bodies were in various stages of decomposition, the stench of death was overpowering. http://www.45thinfantrydivision.com/index14.htm.

This is the history the thieves who stole the sign at Dachau threatened to erase. By desecrating the memorial, they might have hoped to weaken our connection to the Holocaust, to diminish our ability to remember its details. We cannot let this happen.

Like Sheep: Why Didn't You Fight?
How I Learned to Love the Multiverse
10 Big Jewish Inventions
A Journey through Jewish Sicily
Comments