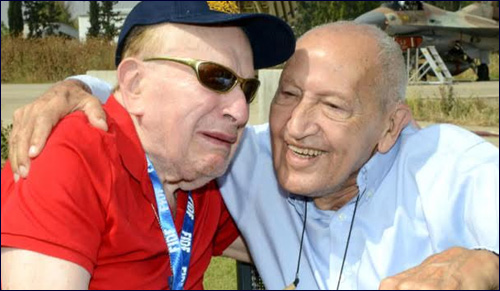 Sidney Shafner was one of the first U.S. soldiers to reach Dachau, where he saved Marcel Levy.

Like many men of “The Greatest Generation” – a phrase coined by American journalist Tom Brokaw – Sidney Shafner enlisted in the U.S. Army during World War II out of a sense of patriotism. He never could have imagined his tour of duty would include liberating a German concentration camp where more than 188,000 prisoners were imprisoned between 1933 and 1945.

“It is unlikely that the total number of victims who died in Dachau will ever be known,” according to the United States Holocaust Memorial Museum.

Shafner bore witness to the atrocities. At age 23, he was among the first Allied troops to reach the camps in 1945. Now 95, the retired Army corporal had a joyful, tearful reunion in Israel this year with one of the prisoners he helped liberate from Dachau, Marcel Levy.

The Friends of the Israel Defense Forces flew Shafner on an eight-day “From Holocaust to Independence” trip to Poland and Israel. In Poland he visited Auschwitz. In Jerusalem he reunited with Levy at an Air Force base commemorating the liberation of Dachau.

“I cried. He cried. We hugged each other. He recognized me; I hardly recognized him,” Shafner recalled in a telephone interview from the retirement home where he lives in Denver, Colorado. “I had my daughter with me. He had his daughter. I’m in a wheelchair now.”

Their friendship has lasted for seven decades, since the day in April 1945 when Levy and another young man escaped the death camp and flagged down Shafner’s 42nd Infantry Division convoy as it entered the village of Dachau. “You have to help us,” Levy pleaded in Yiddish.

The American soldiers had captured Nuremberg and were heading south to check out the road to Munich. They passed through Dachau along the way. 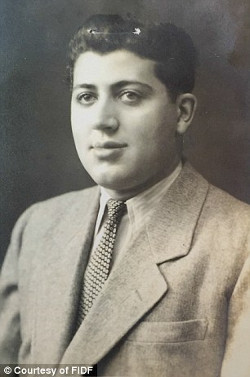 Marcel Levy as a young man.

“We entered the village carefully and we shot out the church steeple, because the Germans were known to have snipers in their churches,” Shafner says. “The very second that happened, all dickens broke loose from seemingly nowhere. Hundreds of people appeared in strange-looking clothes. We were not prepared for this. We were prepared to fight.”

The Germans knew that the American soldiers were close and many had run off, leaving just a few behind to guard the Jews. Marcel was one of the people who ran out of the camp to get help in the village of Dachau.

Some 30,000 skeletal prisoners, many with distended stomachs, greeted their sight.

“If we hadn’t shot out that steeple, I don’t know what would have happened to all those people.”

Marcel Levy was 17 then, the only survivor in his family. Shafner invited him to come work in the kitchen for his troop, and Levy happily agreed. “He was with us an entire year. Like one of the boys,” says Shafner.

The two have stayed in touch ever since. They wrote letters, visited in 1970 and 1995, then eventually learned how to use the computer. They still e-mail each other every two weeks.

Both married and had families. A Philadelphia native, Shafner received two bronze stars for his military service, which included several narrow escapes from injury or worse. He wed a nice Jewish girl, Esther, whom he had met during the war when studying engineering at Regis University in Denver.

The Army had selected about 20,000 men to study engineering or medicine. Shafner was among the cohort sent to Regis to study engineering. But after a year and a half, the Army diverted him for infantry duty in Europe. He landed in Marseilles in 1944 and teamed up with a reconnaissance unit that located mines and snipers. His first battle was in the mountainous area of Schweinfurt, Germany, whose factories accounted for large-scale production of ball-bearings for war machines. Shafner believes his training as a combat soldier saved his life more than once by helping with precision maneuvers.

After the war, he put university studies on hold and focused on supporting his family by selling real estate. Seven decades later, in 2014, Regis University awarded him an honorary engineering degree. 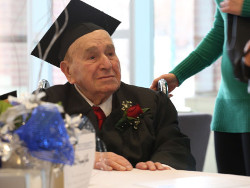 Sidney Shafner at Regis University getting his honorary degree.

When reuniting with his lifelong friend Marcel Levy during a Holocaust remembrance ceremony at the Air Force base in Israel this year, the old soldier received another honor. Levy presented him with a plaque that read, “You came like a warrior angel ... and carried me into the light.”

Levy’s family thanked Shafner for saving Marcel and the thousands of inmates at Dachau.

“Everything that I have today is because of you: all of my children, grandchildren and great grandchildren. You saved my life,” Levy told Shafner, one of the last surviving members of America’s 42nd Infantry Division that detoured through Dachau in the nick of time in 1945.

The unit, nicknamed The Rainbow Division, adopted as its motto: “Never forget!”

Zachor: We Will Never Forget

Holocaust Survivor Reunited with Daughter After 80 Years
Korach 5782: Visit to Lift the Spirit
That Time The Ivy League Found A Way To Limit Jewish Enrollment
Would You Rather Be Right or Happy?
Comments
MOST POPULAR IN Holocaust Studies
Our privacy policy