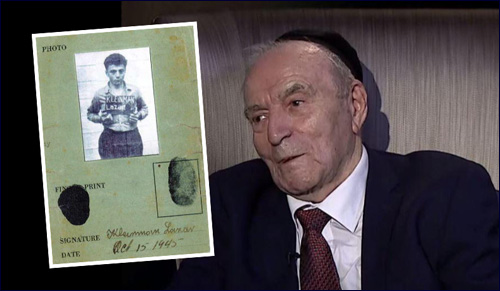 Leslie Kleinman arrived in Auschwitz on his 15th birthday and never saw his family again.

Holocaust survivor Leslie Kleinman arrived at the gates of Auschwitz on his 15th birthday and never saw any of his family members again.

He witnessed unspeakable horrors and has since made it his mission to teach young people of his lasting, haunting memories in the hope that history will never repeat itself. 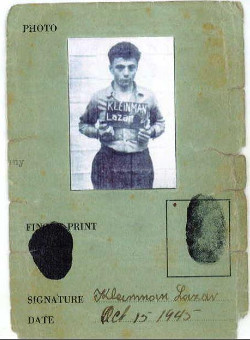 Leslie was just 14 years old when he was sent to Auschwitz concentration camp.

While in the concentration camp and on death marches, the Romanian national saw starving prisoners eating dead bodies, a baby who had its legs torn clean off its body by a Nazi guard, and a Jew working alongside him shot for simply straightening his back.

Leslie wells up as he remembers his family during an interview with Rabbi Naftali Schiff.

But despite the horror of Nazi Auschwitz, his resounding message is one of love, in a bid to educate those who do not know about the terror of the war. 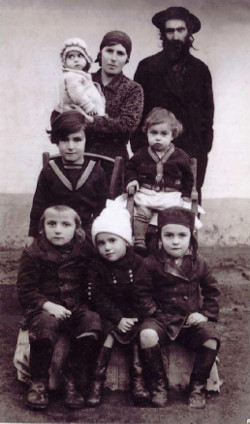 Leslie was born in the village of Ambud, near Satu Mare in northern Romania, which was invaded by Hungarian soldiers in 1940.

The second oldest of eight kids, he was the son of a Rabbi – and was very poor growing up.

After the Hungarian invasion, Jews were forced to wear the Star of David, but otherwise life for Leslie continued as normal.

All this changed in 1944, on the day after Passover, when his dad Martin was arrested and shamed by police, who cut off his sacred beard.

Welling up, Leslie recalls: “The local police came for my father and the first thing they did was cut his beard off. My mother was crying. 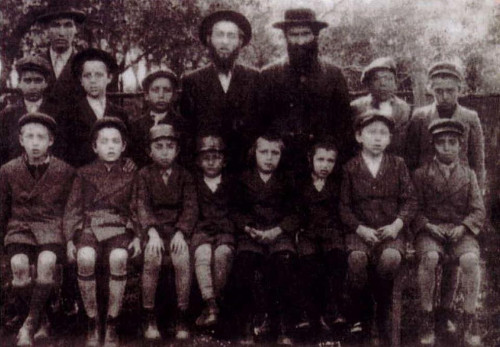 Leslie's dad Martin, back center right, was a Rabbi. Leslie, pictured front now fourth from right, was one of three people in this picture to survive the Holocaust

“She said to my father ‘I don’t think I’m going to see you again’. My father said ‘Don’t worry, God is going to bring me back’.

“But my mother didn’t believe it, and she was right – we never saw my father again.

“They told him a lie, that he was going to Russia to dig trenches. My father was only 33 years old and I thought he could work so he would be back.

“I managed to say goodbye, he gave me a blessing. I was always a big strong man, and he thought I would survive and carry on the name.”

Leslie, who was 14 years old at the time, added: “Two weeks later the police came for us. I later found out my father never went to Russia. He went straight to Auschwitz-Birkenau and that’s where he died.” 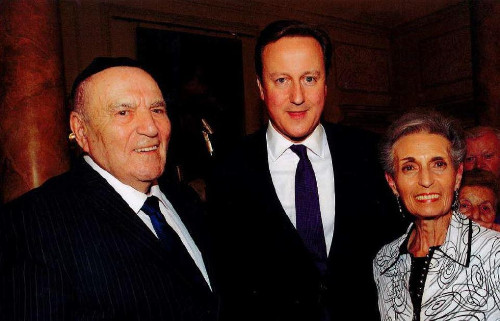 Leslie and his second wife Miriam with then Prime Minister David Cameron, in 2014

Leslie’s family was taken to a ghetto, with 18,000 other Jews, where they lived for around a month.

When the freight trains came, on May 18, the group was told they were being taken to Germany – and were packed into carriages, with just one bucket as a toilet between 110 people.

Leslie said: “I remember one man shouted out ‘this train does not go to Germany, it goes east’. He knew.

“The crying that was going on was unbelievable. We stopped outside a Catholic church and they said the Jewish people were crying so badly that they couldn’t say the service anymore.

“In only a few hours the bucket was full up, and the stench was unbelievable. There was no privacy, we weren’t humans anymore. The women and men were together and getting undressed to go to the toilet. I can still see it in my mind sometimes.”

Leslie arrived at the gates of Auschwitz on May 29, 1944 – the day of his 15th birthday. They had left the ghetto 11 days earlier.

He said: “We stopped for quite a few days. We were hungry, we needed to get out and go to the toilet, but so many trains arrived at the same time. It was the biggest train station in the world and it still was not big enough. There were a million people in Auschwitz in 1944.”

Into the Gas Chambers

When the Nazis finally opened the doors, the prisoners were rushed into the concentration camp.

Leslie said: “We saw a cloud of people, a dark cloud covering the whole place. We started marching and they said ‘You’re going to have a shower.’ And everyone was glad to go, they believed them.

“The stink and the smell, we were filthy. It was a blessing to go and have a shower. What they didn’t know is, there’s no water in the building.”

Dr Josef Mengele is now known as the Angel of Death, but amazingly it was he who saved Leslie’s life. 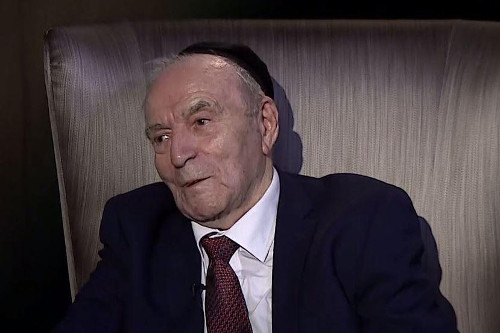 Leslie says he wants to preach love, not hate, when talking about his experiences

Sadly, the same could not be said for his family who all, with the exception of his eldest sister Greeta, were killed that day. His youngest brothers were just two and four.

He said: “I was marching with my family and as I got to Dr Mengele, maybe 15 yards before, this Polish Jew picked me out and asked me how old I was.

“I never saw (my family) after that. I found myself alone in the world. I never said goodbye (to my mother). But I saw her a couple of times in my dreams and I said goodbye then.”

Even when he discovered the horrific truth about the gas chambers, Leslie clung to the hope of seeing Greeta – who was two years older than him – again.

Before being sent to work, Leslie was branded with the number ‘8203’ - which ironically means 'love' or 'God' in Hebrew.

He said: “The Nazis didn’t know they gave me love. But God knew, God wanted me to have this number.”

The Baby Torn to Death

It was while he was working that Leslie saw some of the most unspeakable things. He said: “I saw a truck turn up which was full of 600 little tiny children, babies. They were crying and I knew they were going straight to the gas chambers and their death.

“One of the children fell out – and I was about 25 or 30 meters from there. The guard stopped the car, picked up the child, tore off its two legs, it was bloody.

“I was working on the railway lines. It was -25 degrees in a pair of pyjamas, no gloves and my hands were stuck to the metal.”

This is far from the only story which sticks out in his mind.

Leslie said: “One day there was a man from Holland next to me, we were working together. He stood up to straighten his back, that’s all he did, and the guard shot him. The guard was Hungarian so I said, ‘Why did you shoot him?’

“He said, ‘He’s here to work, not to straighten his back.’ I thought ‘I can’t say any more, I’m just going to keep quiet unless he shoots me’.

“Three weeks later I was very sick, I thought I was dying already, so I went to the toilet for 20 minutes. When I got back the same guy shouted out to me, ‘You were there 20 minutes in the toilet. You’re not supposed to be there that long, come over here.’

“He told me to drop my pants and gave me 30 lashes. Instead of being annoyed with him, I thanked God he only gave me lashes. He could have killed me. I wasn’t annoyed with him, even after all the terrible things he had done. You just have to let it go.” 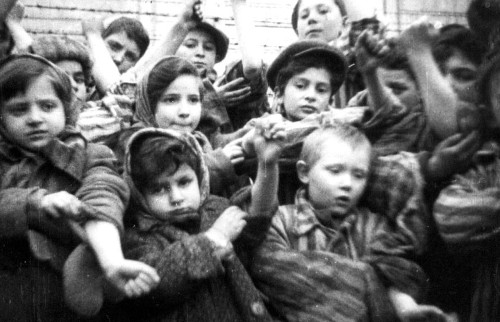 Young Jews show off their tattooed ID numbers.
Leslie's was 8203, which he believes means 'love'

After nearly eight months in Auschwitz, on January 18 1945, Leslie was sent on a death march to Germany – trekking 500 miles through the forest.

He said: “They didn’t give us any food, nothing at all. We were starving and many people - Auschwitz prisoners - were eating dead bodies. I couldn’t do that. I was eating the grass and drinking the snow. That kept me going, praise God I never had any problems. Other people tried it and they died of diarrhea.

“It was -20, 25 (degrees), with no gloves and no warm clothes - I was wearing only a pair of pyjamas and a blanket in my hand and a pair of clogs. Every few minutes somebody got shot, if you couldn’t walk you got shot. For 5,000 people, if you’re lucky, there were 200 left.”

Welling up, he added: “God was looking after me. I would never give up because I thought I’m the only one left in my family, and there’s no way I’m going to see my family die in vain. I thought they’re not going to kill me, we’ve got a long way to go yet.”

Leslie was finally liberated by American soldiers in April, when they stopped overnight in a village farm, and the Nazis disappeared without warning.

Leslie recalled: “I looked around me and everyone had gone. I didn’t know what to do, I was only 15 then. So I decided to jump into a foxhole and wait there and see what happened. As I was waiting a guy comes over with a Tommy gun. He asked me if I was Jewish and said, ‘Shalom, I’m also a Jew.’

“We both started to cry, I weighed less than 20kg at the time. He took me to an army hospital and then he sent me to a convent.”

After regaining his strength, Leslie travelled to Prague, where he met up with his dad’s cousin and asked for news of Greeta.

Tragically, he discovered that she died of typhoid on a death march to Bergen-Belsen, two days after the liberation.

“I was liberated on April 23, in the convent they call it ‘Leslie’s second birthday.’ They say, ‘When you were brought here you were half dead, you were so ill. So we brought you back to life.’”

This article originally appeared in The Sun. Leslie’s interview was arranged by J-Roots, a charity who takes today’s Jews on trips to places of historical significance – like Auschwitz.

The Belgian Priest who Saved 400 Jews

The Secret Mission of Castellanos and Mandl

"Remember Your Heritage!"
Is Grease the Word?
Dried Fruit Compote
Scientific Curiosity and the Divine Encounter
Comments
MOST POPULAR IN Holocaust Studies
Our privacy policy
Aish.com Is Looking for Great Writers