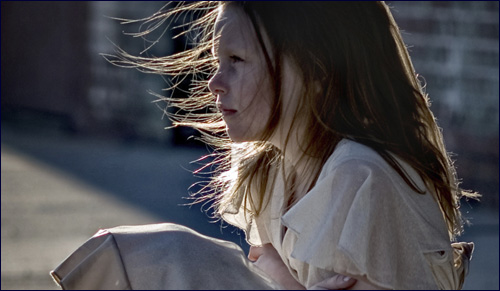 A feast of rotten potatoes in Leipzig.

She is hungry. An emptiness has gnawed at her stomach for months. Now it claws at her ribs. She is so hungry.

They are to leave their barrack soon for another day of endless movement of hands, quick, circular motions and fastening and screwing, and remaining far from the whip.

She wants to howl. She doesn't.

She is part of a team, constructing airplanes for the war effort. She is twelve years old.

The 27 girls in her block struggle out of the rotten planks they call bed. She is dressed and ready at the door. She stares out at the sky, a brilliant blue face of Germany.

She crumples at the sight of the sky's royal color. For a moment, she thinks about life and color and elusive joy. Then hunger slams back into her, leaving her breathless. She turns to look at the girls behind her, squares her shoulders, and steps out.

"Zeldah!" her sister Sheindel wails from behind her. In a flash, Sheindel has left the barrack and catches Zeldah's arm, to drag her back inside. Cold fear gleams in Sheindel's eyes. "Zeldah, what are you going to do this time?"

"I'm going to find food." She smiles as she says it, as if it is the most natural thing to do on a hungry morning, as if they aren't in a hateful place in a hateful country, with home but a silky dream, a whiff of a fragrance long gone.

Zeldah shrugs, angry. If there is one thing the Germans cannot steal from her, it is her fire. Her spunk, her feisty sense of humor. "Breakfast!"

Sheindel starts to cry. "Please, Zeldah, don't be so childish! They'll catch you!" she cries hoarsely. At eighteen, she feels responsible for her little sister who is tottering dangerously at the edge of the miracle wings she is treading on. She should be unnoticeable, obedient. Zeldah is so young; it is absurd that she has survived until now. And now, again, she is doing something crazy.

Zeldah says nothing. What can she say? Sheindel is probably right, but she is too hungry to care.

Sheindel gazes steadily at her sister, silently imploring her, and she fancies that the

She purses her lips and looks beyond Zeldah and her eyes suddenly fill with the tender memories of her heart. She sees the gentle crinkles around her mother's soft eyes, hears brothers splashing in the lake behind the house. Gleeful eyes, dimpled grins, and wet peyos. She listens to the silence. The faintest strains of her father's voice tickle her ear like a feather; echoes of the last song he sang on the last Shabbos before he was taken away. From nowhere, the heady aroma of home thickens in the cold air, that achingly wonderful scent of baking bread and love and she inhales. But she smells smoke and tastes death, and the tips of magic memory shiver cruelly before her, just out of reach. Her heart lurches up to her throat. She cries harder, "Zeldah, how can you be so stupid? Please, just stay here!"

Zeldah smiles painfully. "Don't worry. I'll bring you back some food." She strides off, feigning confidence.

A Potato in Leipzig

For a few moments, Zeldah loses herself. The sky is bright above her, the air crisp in her throat. She is Zeldah, after all, and the Germans cannot snatch away her spark. Will she let herself be starved like that? She knows she is allowed out at this time and there are no guards around. Minutes roll by and she quickly covers ground until she finds what she is looking for, the garbage dumpster.

For a minute she just looks, afraid to admit to the revulsion curdling in her throat. She thinks of Mamme for a moment, neat and sweet-smelling and shining like a queen, before snapping her fingers smartly, to chase away the thought. Mamme would want her to eat.

She swallows. Ignoring the smell and the dirt, she digs.

She is rewarded. Potatoes. She stuffs her goods into the lining of her coat; rotten potatoes, peels, crumbs, whatever she can find. She is a well-bred girl, brought up with Mamme's golden chicken soup and fluffy babkes, but right now her heart sings at the sight of her goods.

She turns to leave, a new joy fluttering happily in her chest. She will bring food for her sister and she will calm the hunger tearing through her stomach.

Her heart becomes a ball of frozen terror in her chest. ”What are you doing here?”

Her heart becomes a ball of frozen terror in her chest, breath turning to ice in her lungs. A tall, hateful woman in green appears, blinking suspiciously at the sight of a slip of a girl, standing meekly next to the dumpsters, eyes large and lost.

"What are you doing here?" her voice is jagged ice and hissing fire.

I'm going to die, a voice says in her mind as panic boils on her tongue.

The green-clad witch glares at Zeldah, then runs her hands along the child's coat.

It is stuffed with potatoes, bulging out at the bottom. The woman takes a step back, and God must have blinded her, because the woman does not see.

Zeldah flees, potatoes knocking into her feet, heart hammering through her teeth. Tears slip down her cheeks as the wind escapes her lungs, and still she runs, crying soundlessly into the cold.

And then suddenly she's back, and Sheindel is hugging her, and they both just stand and cry.

There is still time before they have to leave for work. There's an oven in her barrack and as she slips her moldy potatoes into its embracing heat, the girls stare in wonder and joy. A potato! In Leipzig!

The potatoes are hot and soft, velvet on her tongue. Her sister sits beside her as they indulge in this glorious feast. Zeldah feels warm inside, snug, cozy, and for a minute she lets herself forget that she is in a labor camp in Leipzig, Germany. She is home, sitting next to the red brick fireplace, her hands warming on a mug filled with Mamme's sugary, lemony tea. The scent of fresh bread lingers vaguely in her nostrils. A rich smell wafts in from the spice growing on the field out back.

Tatteh is learning and Mamme is singing at the stove. Mamme loves to sing. Her big brothers are debating something again and the usual flash of annoyance doesn't come. Instead, she hears their cheerful bantering and the occasional thump on a shoulder and it seems to her to be the most beautiful sound in all the world. Sheindel is concentrating on the mending, humming and rocking in her usual placid way. Little Ahrele runs over to her, peyos swinging, his dark eyes crinkling. Home.

Zeldah swallows the last of her potato, swallows the warmth along with it. She gets up shakily to follow the girls out to work.

God has saved her today. He will protect her in the dark days to come.

At the door, she stops. Her stomach sighs with a sudden and deep sense of comfort, a breathtaking feeling of full. For this day, just for this day, she is no longer hungry. She is no more the windblown orphan, the wretched shadow of a once beautiful, happy girl. God has saved her today. He has saved her many times before. He will watch over her and protect her in the dark days to come.

A version of this article originally appeared in Mishpacha Magazine.

Faigy Schonfeld is a freelance writer residing in Brooklyn.

Searching for Jews Saved by the Angel of Budapest
It Takes A Lot Of Faith To Be An Atheist
How Instagram Brought Back This Nostalgic Soup
What Makes Eli Run?
Comments
MOST POPULAR IN Holocaust Studies
Our privacy policy