The Belgian Priest who Saved 400 Jews 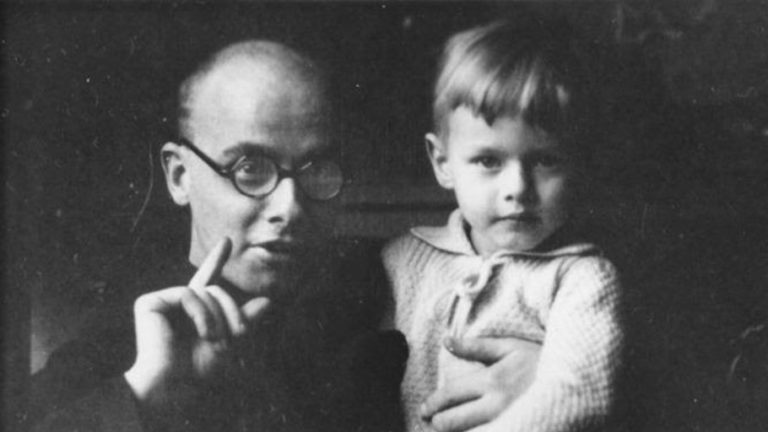 Dom Bruno joined the resistance and at great risk to his life established a network of hiding places for Jewish children.

Born into an upper middle class, pious Catholic family in Brussels, it was not unusual for Henri Reynders to choose the life of a monk. But in many other respects Reynders proved to be a most unusual man, and a heroic one as well. After taking his vows in Rome in 1925, he led a monastic life. Three years later, ordained as a priest, he joined the Benedictine order in the town of Louvain and took the religious name of Dom Bruno. Though deeply devout, he was a maverick thinker in regard to some of the church’s doctrines.

After the German invasion of Poland in September 1939, Belgium mobilized its army and Dom Bruno served as a chaplain with its 41st Artillery Regiment. When the Germans invaded Belgium, the small country was quickly overrun and King Leopold surrendered his army during the battle of Dunkirk. After sustaining a leg injury, Dom Bruno spent the next six months in prisoner-of-war camps at Wolfsburg and Doessel, Germany, giving religious and moral support to the other prisoners.

After King Leopold met with Hitler, the Germans released many Belgian prisoners of war, including Dom Bruno. Upon his return to the abbey, he continued his teaching career. Due to his strong anti-Nazi beliefs he made contact with the burgeoning Belgium Resistance movement and helped to save downed Allied flyers and return them to Britain. 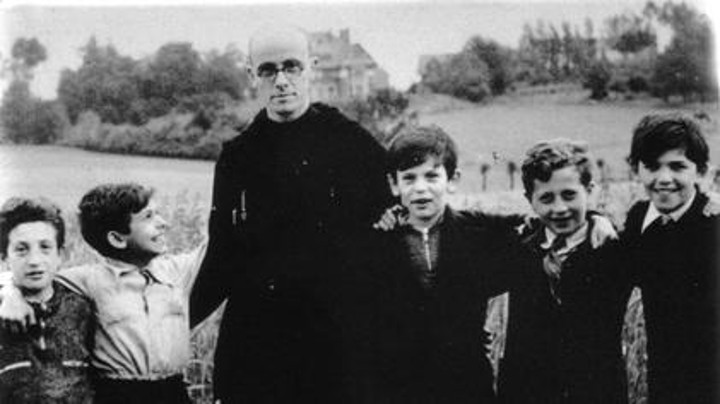 With the completion of the Nazi death camps in Poland in 1942, the Nazis began deporting the Jews in Belgium. Dom Bruno received permission from the abbot to work as a chaplain at a home for the blind in a small village. There Dom Bruno discovered that the manager of the home and many of the residents were actually Jews in hiding. Both adults and children had found refuge there, thanks to Albert van den Berg, a notable lawyer working with Christian aid organizations.

The situation was extremely dangerous since Nazis were actively hunting Jews and many Belgian informers were in the area. When Van den Berg and Dom Bruno realized the home was not safe, they closed it down and dispersed the Jews to rural areas. Dom Bruno then undertook the risky task of organizing hiding places for the children, using all his influence with friends and acquaintances. He sent the children to private homes, including those of his own mother and brother.

Traveling to various Catholic institutions such as boarding schools, he asked them to shelter the Jewish children. He would accompany the children personally and return to visit them, bringing news of their parents if they were also in hiding. He provided them with false identity cards with non-Jewish names and ration cards.

Riding from place to place on his bicycle, Dom Bruno solved problems and assumed responsibility for even small details of the plans. At first he worked alone, receiving only financial support from the Van den Berg operation and Belgian banker Jules Dubois-Pelerin. After expanding his contacts with other resistance groups, Dom Bruno had to flee when the Gestapo grew suspicious of his activities. When they raided the Mont César Abbey, Dom Bruno was fortunately not there but he had to go into hiding, exchanging his monk’s habit for civilian clothes and a beret to hide his shaved head. Another monk gave him a false identification card. 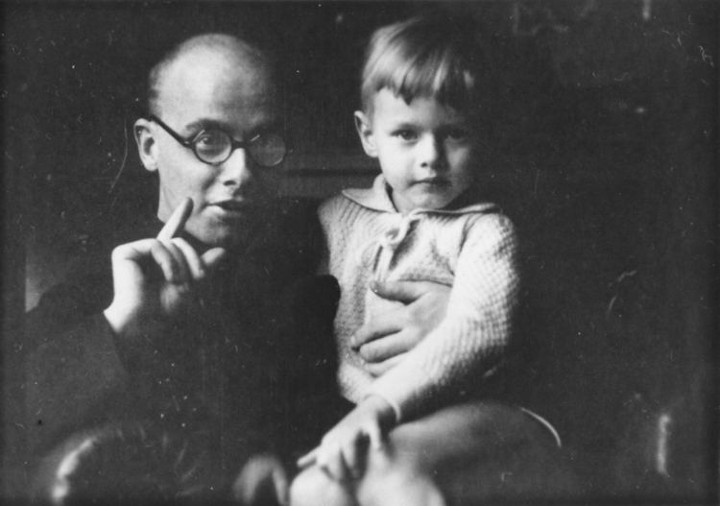 Despite the grave danger, he continued to help Jews even while he was on the run. His courageous acts saved 400 Jewish lives, mostly children.

Those saved by Dom Bruno expressed their deepest appreciation to him. Gilles Rozberg recalled, “One night in 1943, when I had just turned 13 years old, I met Father Bruno on the street. He didn’t know me but I recognized him by the way he walked, the cloak he wore, and his tall, elegant hat. I really threw myself at him and asked for his help. After a few seconds of suspicion and concern, he said he was ready to help me. Two weeks later, my younger brother and I were taken to a hiding place.” 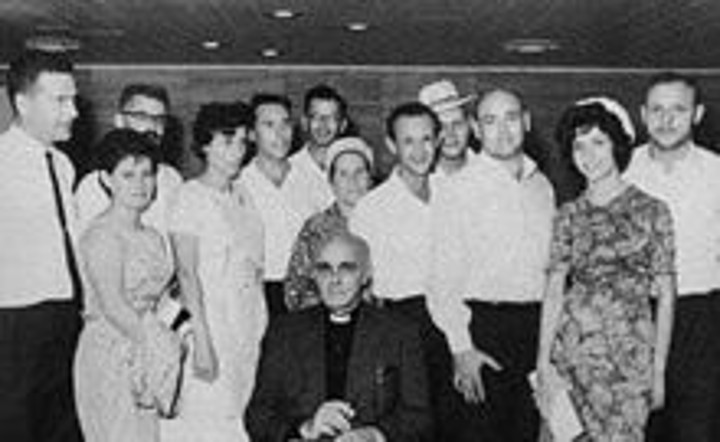 Dom Bruno in Jerusalem with some of his 'hidden children'

Flora Singer-Mendalavitz explained, “Dom Bruno was like an angel who came and saved our lives. He gave my mother instructions on how to get to the northern train station with three children where we would meet a woman dressed in a special way waiting for us. We had to follow this woman onto her carriage on the train without kissing our mother goodbye or saying farewell. We did this and after the train pulled out of the station, the woman told us we were being taken to a safe place. After the liberation, we went to live in Brussels where Dom Bruno visited us regularly and brought us food. He registered me in a Catholic school with firm orders to exempt me from Christian ritual lessons and other religious instruction classes. I also took courses in typing, painting, and piano, taught to me by one of the Sisters of the convent. Dom Bruno paid for everything. Even today when I sit and type, like now as I write this, I see Dom Bruno’s face in front of me and I say ‘Thank you.’ “

Thanks to the actions of the Catholic Church and the brave resistance movement, three-quarters of Belgium’s 100,000 Jews managed to survive the war, despite the massive collaboration which took place. After Belgium was liberated in September 1944, Dom Bruno helped reunite the hidden children with their parents or other family members. However, representatives of the Jewish community opposed the efforts of some Christian families to adopt Jewish orphans. Tragically, many of the younger children who could not remember their Jewish origins, wanted to stay with the families who had unofficially adopted them. Under the Nazi occupation, Dom Bruno did not permit conversion of the Jewish children to Catholicism. He later changed his position, believing that the best interests of each child should be the most important factor. 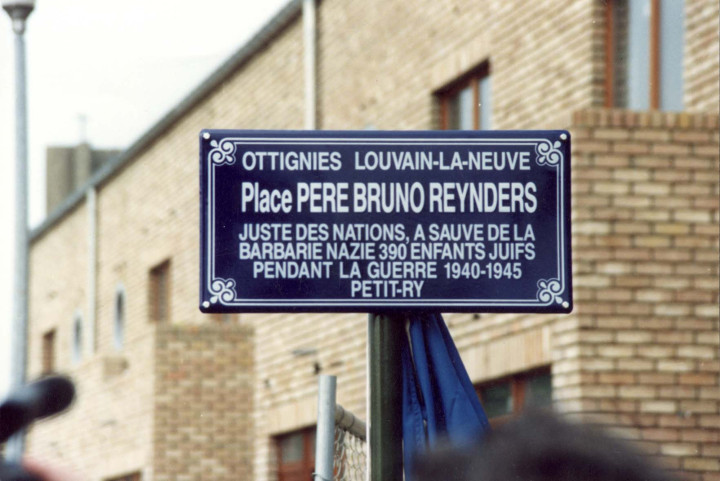 When the war ended, Dom Bruno briefly returned to the abbey but was reassigned by his order to other locations in Belgium, France and Rome. His final position was as vicar in the town of Ottignies where he took care of the elderly, ill, and handicapped population.

In 1964, Yad Vashem honored Dom Bruno as one of the "Righteous Among the Nations". When his Parkinson's disease grew more serious, Dom Bruno retired to a nursing home. He died at the age of 78 and was buried at his beloved abbey.

Ten years after his death, a square in the city of Ottignies was named in his honor where a plaque states: Dom Bruno, Benedictine (1903-1981). Hero of the resistance. At the risk of his life he saved 400 Jews from Nazi barbarism.