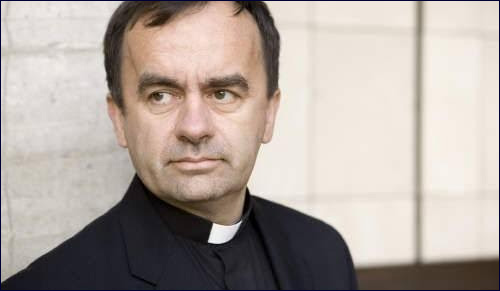 “Were you here during the war?

For fifteen years, Father Patrick Desbois, a Catholic priest from Paris, has combed countless villages throughout Eastern Europe, asking that question of elderly residents. With his unassuming manner and clerical garb, people gladly open up him; many even invite him home for meals.

But these are no idle chats. When he finds people who lived in the village during World War II, Father Desbois then asks: were you here when the Jews were killed?

Far from recoiling at his questions, many witnesses seem almost glad to finally talk about those days when they witnessed their town’s Jews murdered en masse. In over one hundred research trips, yielding 4,485 videotaped testimonies, Father Desbois has uncovered 1,744 hitherto unknown, unmarked execution sites and mass graves. His work has revised estimates of the number of Jews killed in the Holocaust upward by up to half a million victims.

Father Desbois’ interest in his work began as a young man. Growing up on his family’s farm in the Burgundy region of France, he was surrounded by secrets of the Holocaust – though he didn’t know it. His mother told him only recently that during the Second World War, their family sheltered dozens of Resistance members on their farm. A family cousin was killed in a concentration camp for her Resistance activities.

The biggest secret of all came from Father Desbois’ beloved grandfather Cornelius. The two were very close, but there was one episode in his life that his grandfather never talked about: his years imprisoned in a POW camp near the Ukrainian town of Rawa-Ruska during the war. He would only say “for us it was bad, for others it was worse.” As he grew up, Father Desbois realized his grandfather was referring to the town’s approximately 15,000 Jews.

Young Patrick developed an interest in Jews and Judaism. He studied Hebrew and visited Israel. Once he became a priest, he worked for the Catholic Church as a liaison to the Jewish community in Paris. He was offered the chance to visit Rawa-Ruska in 2002. He longed to see where his grandfather was held and was also interested in learning more about the fate of the town’s Jews. The visit enraged him and changed the direction of his life.

Meeting the town’s mayor, Father Desbois asked, “Mr. Mayor, where were all the Jews from the village buried?” Over a decade later, his anger and frustration with the official’s uncaring response is still palpable. “The mayor turned to stare at me and then, with an absent air, said ‘We didn’t know anything about that’.”

As he spoke with local officials, Father Desbois realized “everyone seemed to be ignorant of – or eager to hide – the very existence of the ten thousand Jews who had been shot in this little town back in 1942.” Father Desbois was shocked. “Ten thousand people shot cannot go unnoticed. I come from a small village and I know that if one person had been shot there, everyone would remember it – imagine ten thousand!”

A new mayor was elected and Father Desbois returned, asking again about the fate of Rawa-Ruska’s many Jewish citizens. As he recounted in a 2012 interview, the new mayor led him into a forest where about 50 elderly villagers were gathered in a semicircle. “You are standing on the graves of the last 1,500 Jews of Rawa-Ruska,” the mayor told him.

One by one, the elderly locals stepped forward and shared their memories of the war. Children or teenagers at the time, many of them helped the Nazis round up truckload after truckload of Jews and bring them to this clearing. They told him how they helped guard the Jews to prevent any escapes as the Jews were forced to dig pits. They served the German soldiers food and brought them a gramaphone so they could listen to music. They watched as the Germans shot the Jews, dumping their bodies into the pits. One woman told Father Desbois that her job had been to pick tree branches and use them to cover the dead bodies so the next group of Jews wouldn’t see. She was 14 at the time. When the last of the Jews had been shot, they had filled in the pits with earth.

Father Desbois was the first outsider the villagers had told this to. Many asked him, “Why are you coming so late? We have been waiting for you.” In 2004, Father Desbois established Yahad-in-Unum. Yahad in Hebrew means together and Unum is one in Latin. Funded by mainly by a Holocaust Foundation in France and the Catholic Church, it’s the only body dedicated to gathering testimony like this and documenting the location of the untold number of Jewish mass graves in Eastern Europe.

The Einsatzgruppen shot dead over 1.5 million Jews following the strict rule: one Jew, one bullet.

The task is daunting. While millions of Jews who died in the Holocaust were murdered in death camps such as Auschwitz, millions more were shot in Eastern Europe after Germany invaded the Soviet Union in 1941 where the task of murdering Europe’s Jews fell to mobile execution units called Einsatzgruppen. Unlike the deadly gas used in many death camps, the Einsatzgruppen used bullets. Jews were typically told to gather in a place because they were going to be transported to Palestine. Instead they were shot and their bodies buried in unmarked mass graves.

In order to save money, Nazi killing squads in the Soviet Union operated according to a strict rule: one Jew, one bullet. Father Desbois calls these murders of over 1.5 million Jews the “Holocaust of Bullets”.

It was also, until recently, largely secret. Not only were the mass graves unmarked, towards the end of World War II, another Nazi division – the Sonderaktion 1005 – was charged with erasing evidence of earlier atrocities, often exhuming some of the bodies in mass graves and burning them.

A Race Against Time

“I am running against time," Father Desbois said in 2009. "We have a maximum of six or seven years if we take into account the age of the witnesses because they are so old. Sometimes you arrive in the village and are told 'I'm sorry, Father, but Madame Anna died just one month ago and she was the last witness. And now nobody knows any more.' So I see time is short and we need to achieve our goal as quickly as possible, which is why we must multiply our energy."

Today, Father Desbois continues his work among the very last witnesses to these atrocities. Travelling with a team including translators, photographers, videographers and ballistics experts, he laboriously tracks down and documents every story. Many of these are chilling. (Note: the details that follow may be disturbing to read.)

One woman described her “job” after a massacre of Jews in her village: to walk across the fallen corpses to flatten them before another group of Jews was shot.

Jan, from Poland described seeing the site of a mass grave: “We could see the blood bubbling.”

Anna, from Ukraine, remembered “They were screaming, the children were crying. When the pit was full they filled it with (a) little earth. For three days the ground moved. Some were still alive.

Another woman described seeing her Jewish friend in line to be shot – and how her friend comforted her, saying “Don’t cry, don’t cry—we are going to Palestine.”

One man named Dimitri was 16 when he watched Nazi’s kill his area’s Jews. Nazis and locals worked together, shooting groups of 20 Jews at a time. The killing went on for two weeks, he described. In all, over 18,000 were shot.

At times, witnesses recall the names of the murdered Jews. 80 year old Anatoly was able to remember: Brick, Gorovich, Shurman, and Folst. Without his interview, those names would be forgotten. 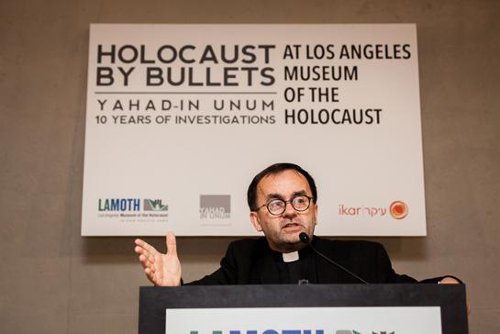 Others recalled how German soldiers drummed on empty buckets to drown out the screams of their victims.

The silence shrouding these events contrasts sharply with the public knowledge that these massacres were happening at the time. As well as documenting the massacres and mass graves, Father Desbois says he wants to show that the murder of Jews was publicly known, even celebrated. “On the evening of the killing they would organize a party for the shooters," he explains. There was food, drink, music, dancing and women." These parties travelled with the death units, as they moved from village to village. “They were running when they heard when they were killing Jews, to see, to try to catch a coin, to check out your clothes, to take a picture. They wanted to be there.”

As he methodically moves from village to village, Father Desbois leaves little trace behind. He has brought rabbis to the sites of mass graves he’s discovered in order to sanctify them as Jewish cemeteries – but due to fears of looting, he does not mark or otherwise identify the graves at the site. Embraced by Jews around the world, Father Desbois also faces enemies. He keeps the location of his home in Paris secret and has received threats because of his work.

In his race against time, Father Desbois explains what helps motivate him in the face of almost unthinkable horror. “I try to think really concretely of these people not as a millions or just mathematics,” he has explained. Instead, he focuses on the concrete: “I am looking for the tombs of Isaac, Rebecca and Dora," he says.

“You cannot leave Europe with thousands of unknown unmarked graves,” Father Desbois explains, “or we deny all our values. We cannot build a safe Europe and a modern world and ask people to keep silent. Otherwise we justify the next genocide. It is the ultimate victory to Hitler if we don't bury the victims."

Father Desbois recounts his story in his book, The Holocaust By Bullets: A Priest’s Journey to Uncover the Truth Behind the Murder of One and A Half Million Jews by Father Patrick Desbois