The Fairest of Them All 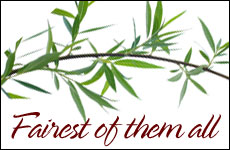 Why does the lowly willow play the climactic role during Sukkot?

The holiday of Sukkot has many elements to it. The most evident ones are the sukkah huts that commemorate Israel's sojourn in the desert, and their total dependence on God's benevolence.

Second to that mitzvah is the mitzvah of the "four species." There are many specific explanations -- but there is an overriding theme that fits all explanations. It is a way of praising God with a "bouquet of beauty." Whether the individual elements symbolize different parts of God's name, or different organs of a person, or different elements of Israel -- the idea is that we praise God by offering Him this "bouquet" in gratitude and praise.

While many specific explanations are given by the rabbis, the prevailing one is that of a bringing together of different elements of the Israeli nation. There are the members of Israel who are learned and the quality of their wisdom is symbolized in their fragrance, such as the myrtle leaves. Then there are the members of Israel who are less learned but are full of deeds -- symbolized by the palm frond that bears fruit. Then again there are the select few who combine both -- symbolized by the single and beautiful esrog, that is both fragrant and edible. And finally there are the drab willows -- neither edible nor fragrant, symbolizing those Jews who posses neither of those qualities.

The need to take the plain willow branches along with the others are seen as a gesture of inclusivity, of reaching out to the unaccomplished and unadorned one, to make him feel that he is part of it all.

Yet a closer look at the way we perform the mitzvah gives us a very different picture.

At the very last day of Sukkot we perform our mitzvah of taking the four species as usual. But then we put down all of those four species, and we take a batch of willows in our hand. We pray special prayers for rain, and that is how we end the mitzvah of taking the four species. This is based on a custom started in the days of the Temple. Every one of the seven days of Sukkot we would adorn the altar by placing tall aravos (willows) around it, and on the final day of Sukkot we would circle seven times, and comment about those willows, "What a beautiful adornment they are for the altar."

How did those plain Jane willows become the climax of the festival?

To answer we must consider our rabbi's description of those species a little more deeply.

We are not talking about different people offering their selves to God, but rather the different facets of each person's own personality. Let us illustrate: A person is happily married; what is it that bonds him/her to their spouse? You will immediately answer, "The many qualities of one's spouse." But wonderful qualities are a reason to bond, but it is not the bond itself. The bond itself is the sense that one's spouse radiates that he/or she does not exist without the other! If the other person radiates a complete independence and no need for the other, then no bonding will ensue.

That perceived void is what made the marriage bond in the first place.

Almost paradoxically, it is not the other person's accomplishment that consummates the marriage, rather their deficiency and void that allows the union. It is moving to notice how many accomplished people with much going in their lives collapse when their spouse dies, and seem never to recover. That perceived void is what made the marriage bond in the first place.

Let us return to our four species. After the Day of Atonement, we have been cleansed and purified and want to present ourselves to God at our best. We bring a bouquet of our Torah study and our good deeds, because we know that is what God desires and makes Him proud of us, so to speak.

But the glorious finale is not what we have accomplished, but rather our sense of humility before God. We know that we are naught before the Almighty and our dependence is total. The willows at the Temple were placed around the altar and their "heads were

As the prophet says, "The heavens are my throne and the earth my footstool... And who do I look at? At the simple man, of humble spirit, who is eager for every word of Mine" (Isaiah 56).

This then is our encompassing paradox of Divine service. To strive to bring out the best in ourselves and in others, but yet to stand before God unassumingly simple, adorned with the beauty of humility.

Infographics on The Four Species

Laws of the Four Species

Your Lulav and Esrog After Sukkot

Secrets of the Four Species

Sukkot Menu -- Asian Style
Near Death Experience Panel
The Western Wall: The Heart of the World
Ask the Right Question: Tisha B’Av
Comments
MOST POPULAR IN Sukkot
Our privacy policy
Aish.com Is Looking for Great Writers